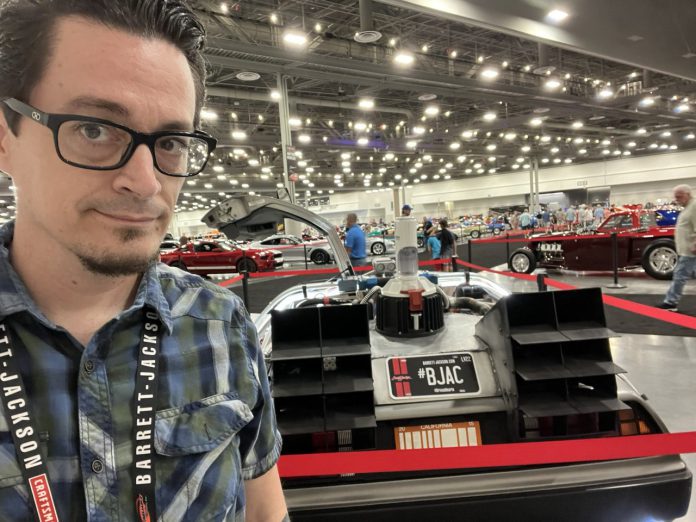 Last week I fired up my Mini Cooper and headed to Las Vegas for the Barrett-Jackson collector car auction. It’s a five-hour drive from my home in Phoenix to Las Vegas and in the ensuing three auction days I ended up walking 14.92 miles around the Las Vegas Convention Center. It was a funky adventure filled with awesome cars, good people and a couple of celebrities.

I love my job. I get to write about cars for a living and occasionally travel to auctions outside of the Valley of the Sun. Covering an auction is a whirlwind; so many cars to see, lots of good people and fellow collector car fans, and it’s like Disneyland for gearheads. If you have the opportunity go to a Barrett-Jackson auction, you won’t regret it.

After arriving in Las Vegas on Wednesday, and checking in to the hotel, the Classic Car Network headed to the Shelby American Heritage Center for a tour. I recommend checking out it out if you are in Las Vegas. It’s a proper celebration of Carroll Shelby and his legacy of incredible racecars and high performance street cars. We were granted access to the factory and the upcoming video series by AutoHunter’s Jeff Sutton will give you a behind the scenes perspective of the legendary performance company. Also, the gift shop is awesome.

The auction started the next morning. A bit tired from the drive to Las Vegas and a lack of sleep, I needed a couple of extra cups of coffee to get my mind right. After perking I headed to the auction.

We had an early morning appointment with Toyota for a Thrill Ride in a Supra at the Convention Center’s temporary track. I sat this one out and watched as professional driver showed off her impressive skills to make that Supra dance and drift. The folks at Toyota were incredibly gracious with their time and we’ll have a video of the Thrill Ride shortly. Even at 8 in the morning the temperature was pushing a 100 degrees, but we had a great time and my respect for those that can make a car drift so smoothly grew exponentially.

My typical day covering an auction is 12-hours or more and when I’m not trying to get an interview or dropping proppa’ coverage at a Thrill Ride, I am writing recaps of the auction. On Thursday I retired to my hotel room around 8 p.m. for some down time. It’s not an exciting life but some Door Dash and a Mission Impossible movie is a great way to unwind after a great day.

Up at 5:30 a.m. to get ready for Day Two of the auction. I’m at the Las Vegas Convention Center by 7 and in the Media Center to get some work done. By 8 a.m. the team was back at the track for a Thrill Ride in a Dodge Challenger Hellcat Redeye.

Jeff Sutton rode shotgun in the 797 horsepower muscle car and before his ride started he made the insightful comment that you can hear the Mopar’s supercharger whine before the car arrives. I guess it’s like the muscle car version of the Doppler effect.

We got a lot of great video of the ride and I got the opportunity to be terrified as I acted as impromptu camera and audio dude in the backseat of a Charger Hellcat. Sitting in the middle of the sports sedan I was buckled in but was still a human ragdoll as the driver drifted around the course. I don’t know if the footage is any good, but hopefully our videographer Dustin Johnson can salvage the material.

After the Thrill Ride I headed back to the media center and got back to work. I use the term ‘work’ loosely as I dig my job, and I consider myself incredibly fortunate for my position in life.

Later in the afternoon I was afforded the chance to interview the president and cofounder of Legacy EV, Mavrick Knoles. We discussed changing the internal combustion engine from a classic car to an electric drivetrain. The dialogue was informative as I learned more about EV drivetrains and the technology associated with the conversions. Many of the answers went over my head, but it was a great conversation about the future of classic cars.

Saturday is the big day for the auction. The high-end cars, the choice selections and maybe a celebrity or two.

I’ve been interviewing folks since my college days at The Nevada Sagebrush, and this role continued through my freelance work as an NHL, NASCAR, and automotive reporter. These interviews were always with athletes and I had never chatted it up with actors and celebrities. That changed on Friday afternoon when Gabriel “Fluffy” Iglesias stopped by to chat about the pair of cars he had up for auction.

It was a great interview as he cracked a ton of jokes that made everyone nearby crack up. A solid dude, we chatted it up, fist bumped and that was the end of my first Hollywood interview, but I had another one coming up shortly.

Claudia Wells, star of Back to the Future, would be onsite to help the sale of a 1985 Toyota SR5 pickup that was customized as an homage to the truck that Michael J. Fox wanted in the movie. The proceeds from the sale of the “Back to the Future” tribute Toyota would go could to charity and would include some movie memorabilia, including a hoverboard, a pair of “self-lacing” shoes, a Gray’s Sports Almanac, and two sleeping bags.

This 80s kid lucked out and got the chance to meet Ms. Wells in the media center before the truck was on the stage for the auction. I didn’t go total fanboy but it was pretty dope to meet her and chop it up. She’s a true sweetheart, said I dressed well and resembled Robert Downey Jr. I rarely get compliments on my attire and this was the highlight of my LV opus. She was ever gracious and agreed to an interview that will be on The Journal soon.

Shortly after the Toyota SR5 crossed the stage the auction was over. Like the last day of school it was time for everyone to go their separate ways until the next one. It was a bittersweet farewell and the next morning I was back on the road and heading home.