Powered by a professionally built 455 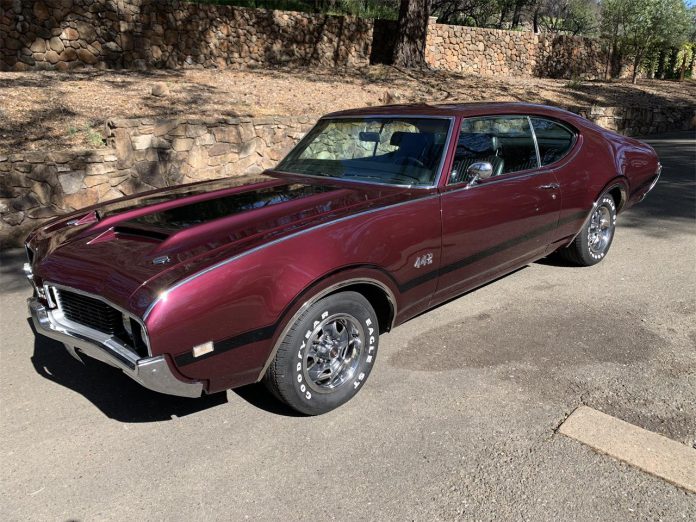 Sometimes a collector-car evokes split personalities — and just because a vehicle has nice lines, and a glistening paint job doesn’t necessarily mean it’s only for “show.”

The Pick of the Day is a 1969 Oldsmobile 442 listed for sale on ClassicCars.com by a private seller in Saint Helena, California. (Click the link to view the listing)

The seller classifies this muscle car as both Beauty and the Beast because it has plenty of “go” to accompany all that the show. “At car shows, I get many compliments on the beautiful Deep Cranberry paint job,” the listing states. “But the professionally built, high-performance engine has tons of tire-spinning torque. This car is a true muscle car lover’s dream.”

This Olds’ motor has a spec sheet that looks more like that of a competition racecar than a street-legal cruiser. The block itself is a massive 455cid V8 that was built by a machine shop in northern California. Included in the lengthy list of upgrades are forged pistons, an Engle camshaft, Edelbrock heads, a Demon carburetor, Hooker headers, an MSD ignition system, and Magnaflow exhaust.

The good news is that the seller has provided a walk-around video of the car’s exhaust note to give a real-world demonstration of what that combination of go-fast goodies sounds like. And it’s beastly indeed.

Brought to market initially as an option package for the F-85 and Cutlass models, the 442 became a standalone nameplate in 1968 and derived its name from the original car’s four-speed manual transmission, four-barrel carburetor, and dual exhausts. The 442’s chassis was shared with other General Motors A-body cars from that era including the Chevrolet Chevelle and the Pontiac LeMans.

Topping off the look on this performance-built Oldsmobile is a set of 14-inch wheels on Super Stock sport wheels wearing Goodyear Eagle tires. The dual hood scoops and dual exhaust outlets are the only exterior clues about the powertrain that lurks underneath the car’s steel skin.

The seller states that the engine oil, transmission fluid, and brake fluid have been changed within the last 100 miles, so this is truly a turn-key muscle car ready for the track or the street. Or both.

The asking price is $38,500 for this well-rounded Olds, which somehow manages to be both beautiful and beastly at the same time.