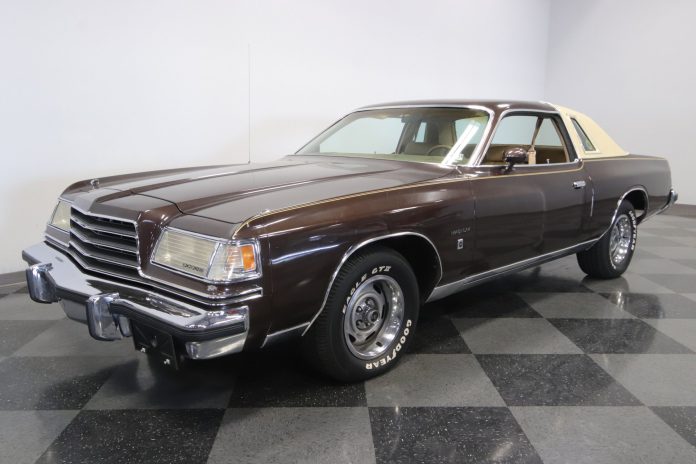 There is a tendency to forget about the muscle cars produced after 1972. The rationale behind that thinking is solid as new emissions laws choked away horsepower from American V8s and the OPEC oil embargo led consumers towards more fuel-efficient vehicle offerings.

Performance dropped as the 70s rambled on, but there were still some solid offerings in the muscle car segment that also have some fly style.

The Pick of the Day is a 1979 Dodge Magnum XE listed for sale on ClassicCars.com by a dealer in Smithfield, Mesa, Arizona. (Click the link to view the listing)

“This example is presented in its factory-correct Sable Tan Sunfire Metallic,” the listing states. “It’s an older respray that’s good for a driver’s classic, but those wanting more of a stunner may use the value price to invest in some upgrades.

“Of course, it already comes with distinction with a refined style seen in details like the opera windows and the way the grille subtly continues under the headlights and around the side. And the tan half vinyl top coordinates with the pinstripes for a pure vintage cool appearance.”

Under the hood is a 318ci V8 engine paired with a column-shifted Torqueflite A727 three-speed automatic transmission and an 8 1/4″ rear end. It features power steering, power front disc brakes, an independent front suspension, and rear leaf springs with shocks.

The cashmere-color interior has power front bucket seats with a fold-down armrest. Amenities include air conditioning, cruise control, and is replete in 70s flavor with an AM/FM 8-track player. The bygone era continues to the exterior of this Mopar.

“Plus, those retractable translucent headlight covers were a finishing touch that looked like they were pure style,” the listing states. “And while these were a signature piece, their true purpose was to help cheat the wind for NASCAR races – just like the Dodge Charger Daytona a decade prior. And just like those special Chargers, these first-gen Magnums have rarity on their side, too, with production lasting only two model years.”

The Arizona-based dealer is asking price $12,995 for the Dodge Magnum XE.