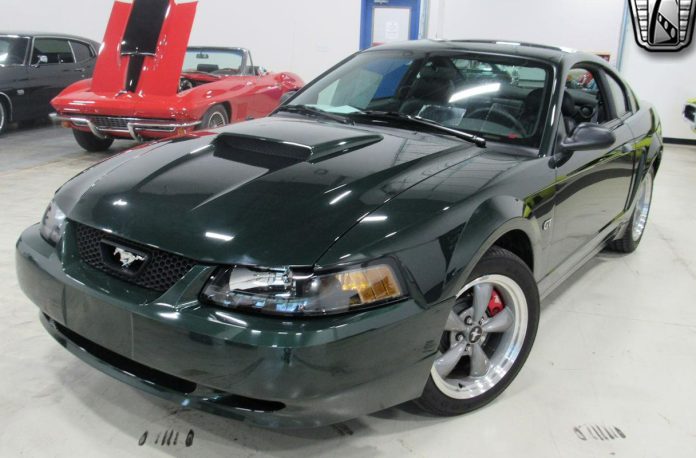 It’s been more than 50 years and Bullitt still resonates with movie fans and car lovers. Its legendary film status is based on the car chase between McQueen’s 1968 Ford Mustang GT fastback and the bad guys in a 1968 Dodge Charger R/T that took place throughout San Francisco. The plot of the movie is probably irrelevant now, because most folks associate the flick with an epic car chase, but the legacy of a green Mustang is still prominent.

Due to fiscal realities I will never own the true Bullitt Mustang, unless Powerball is finally kind to me, but I have reasonably affordable alternatives.

The Pick of the Day is this 2001 Ford Mustang Bullitt GT listed for sale on ClassicCars.com by a dealer in Indianapolis, Indiana. (Click the link to view the listing) This Mustang Bullitt has a strong pedigree and Steve McQueen connections.

Ford built four 2001 Mustang Bullitts for the McQueen estate and three are still with the family. This Mustang Bullitt is the fourth of that set and was sold by McQueen’s first wife, Neile, to the McQueen family’s attorney nearly 20 years ago.

Chad McQueen, Steve’s son, signed the glovebox and Ford’s lead engineer on the Bullitt project, Scott Hoag, signed a strut tower. The listing states that this Mustang has 1,900 miles and was stored in a climate controlled garage for its entire life.

To maintain its proper classic cinematic vibe the exterior is finished in Dark Highland, like the original from the movie, over a dark charcoal interior. It has Bullitt badging throughout and rides on five-spoke wheels with Mustang center caps.

This 2001 Ford Mustang Bullitt GT is available for $76,000 and with its pedigree from the McQueen estate it’s a pretty solid bargain for Bullitt fans.