A weekend at the Greenwich Concours

A proper weekend at the Greenwich Concours 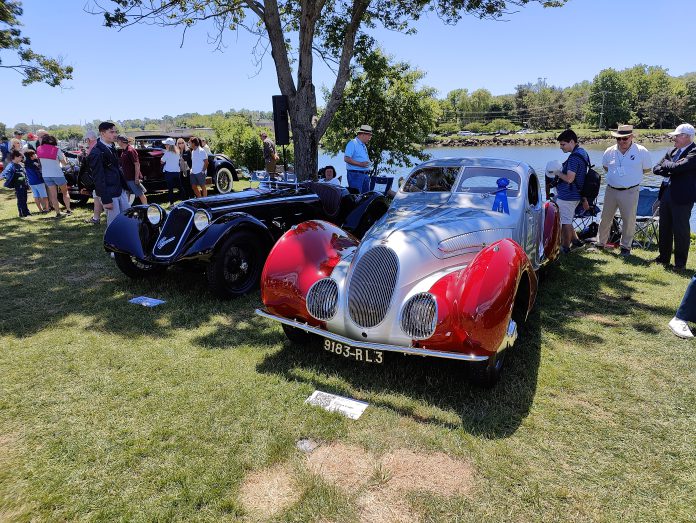 This week marked the 26th year of the Greenwich Concours. This is the second year that the event has been hosted by Hagerty and the experience can best be described as elevated.

Every component of the concours was taken to another level. This does not mean that the staff at Hagerty have made it super high-end. Just that everything was just a little smoother, a little more organized and as a result a lot more enjoyable for spectators, exhibitors, and judges. This year also had an amazing Grand Marshall with Motorsports Hall of Fame inductee and racing legend Judy Stropus filling the role. If you do not know who Judy is, I suggest you Google her.

The event started out with the Greenwich tour, where the cars that would be displayed on the Sunday concours field drove the scenic roads of the Greenwich area making for a bit of a moving concours. While Alan Galbraith and I, along with a pair of Hagerty passengers, cruised in my Rolls-Royce Ghost Black Badge press car.

We all met for lunch and afterwards headed over to a nice reception at The Cultivated Collector. The day concluded with a nice welcome party at the concours grounds.

Saturday was Cars and Community, which included RadWood and The Concours d’ Lemons. Both fields were packed with cars at each side of the spectrum. On one side you had great examples of enthusiast cars from the 80s and 90s and on the other side of the field, strategically hidden by a big row of vendor tents you had, well… some other interesting cars from multiple eras.

On the RadWood side of the field my personal favorite cars on display were the Porsche 944 turbo wearing Brumos livery, and the Audi UR Quattro. Both were painted a 1980s-period appropriate white and were spectacular examples.

On the Lemons side of the field it was a bit different. There were a huge number of air-cooled VWs, none in exceptional condition, a big display of some of the worst ever GM designs, possibly the last running Renault Encore on the planet, and even a Trabant.

While some of these cars were quite rough, others were exceptional examples of mediocre or just plain terrible car designs. The standout of the entire Lemons field was a car that I guarantee was a finely finished as most of the cars on Sunday; a 1977 Ford Pinto wagon. This car was absolutely spectacular. I looked at the car with former GM designer Ed Welburn and Scott George from the Revs Institute and we were astounded by it.

The owner clearly loved the car and went so far as to have it rebodied when he discovered rust in the car after he bought it. What he bought was completely original and he carefully removed all the parts, preserving them like Paul Russell and Company would do with a rare Ferrari. The workmanship on the car was truly spectacular and cost more than five-times the value of the. Not surprisingly he took home the Lemons Worst of Show award and it was well deserved. It might sound crazy to do this with a ‘77 Pinto wagon but enthusiasts like this are what the car hobby is all about.

The other outstanding car for me at Lemons was another stunning example, a Fiat/Bertone X19 with 14k original miles and in stunning and complete original condition. It was the owner’s favorite car. She absolutely loves the car and will be a perfect caretaker for it.

I had the opportunity to again judge at Lemons and I have to say it is a lot of fun. The people you meet vary from amazingly nice to completely out of their minds, but all are truly enthusiasts. Bribes are encouraged but you have to be careful what you accept. We each ended up with five bottles of terrible wine, of course croissants from the Renault owner, and other various items.

The worst bribe given, which I did not accept, was a lemon rosemary chicken and waffle cupcake. For some reason Lemons founder Alan Galbraith though it was a good idea to accept one of these and try it. According to Alan it was absolutely disgusting, which somehow thrilled the car owner who gave it to him. They somehow ended up winning the Best Der Self-SatisfiedKrauttenWagen awards for their Beetle rat rod.

Saturday concluded with a nice dinner at the Del Mar hotel across from the concours field. Again, it was a truly elevated experience with much of the feel of the Amelia Saturday dinner. There were no assigned seats and people mingled throughout the evening.

Sunday was the big concours day and exhibitors started arriving for placement at around 6 a.m. The gates opened at 10 a.m., by which time I was already an hour into judging my class.

This year’s special classes included Alvis, Powered by America (a class for European bodied cars with American engines), Vignale bodied cars, Ferraris by Vignale, David Brown Aston Martins, and Cadillac Eldorados. There were also two fabulous motorcycle classes, one for BMW and the other for BSA.

My favorites were Vignale Ferrari, Powered by America, the David Brown Aston Martin, and the BMW and BSA motorcycle classes. I admit that I am biased about the bike classes, as my friend John Lawless and I assembled both.

Standout cars from the entire field were, in no degree of importance; the 1953 Ferrari 250MM by Vignale, 1935 SS1 Airline Coupe, 1937 Talbot Lago Teardrop, and the 1948 Packard coupe by Vignale.

At 4 p.m. the best of show was announced, and it went to the Packard Convertible Victoria by Vignale, owned by Ralph Murano. This was a bit of a surprise as I thought the Talbot Lago was a shoe in, but I think the result makes sense as the Packard was also stunning, and one-of-one ever constructed.

If the weekend at the Greenwich Concours sounds like it was tons of fun to attend, then I have done my job. I’ve always enjoyed going to the event but this year the staff simply knocked it out of the park. If you have not yet attended or shown at Greenwich, I would be sure to put it on your lists of events to visit in 2023.

Greenwich Concours d’Elegance 2022: Some Landmark Cars, and Their Stories

Hagerty proves a wonderful host at its first Greenwich concours