A true GT with a four cam V8 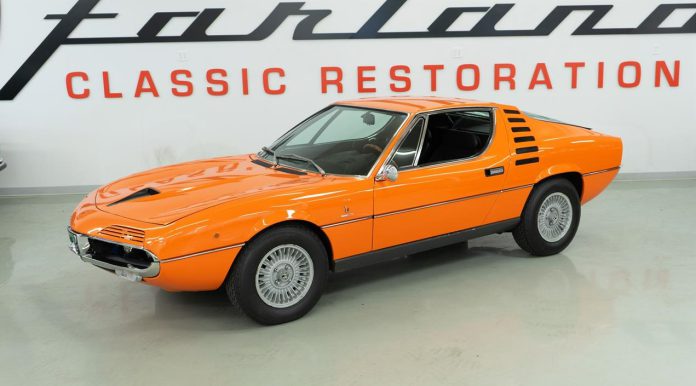 Classic 1970s exotic cars tend to have five things in common. First, they are rare. Second, they tend to have high technology for the era, usually derived from the marque’s competition cars. Third, they have tremendous styling from famous designers. Forth, they do not tend to be comfortable to drive for extended periods. Fifth, they are usually quite expensive.

There is an Italian exotic car from the 1970s era that offers three of these five attributes and the missing one is the best one of all. That car is the Alfa Romeo Montreal.

Let’s run down the above list as it applies to the Montreal. For one the Alfa Romeo Montreal is pretty rare with a total of approximately 3,900 produced. Next for technology the Montreal uses the four cam V8 developed from the engine in the T33 racecar. Next the Montreal was designed by Marcello Gandini, who is also responsible for the Lamborghini Miura. In fact, the Montreal uses the same side vent design element that is seen in the Miura among its design features.

Now where the Montreal veers away from the list above it that it is a comfortable car to drive and can easily be driven for hundreds of miles without bearing up the driver. Try that in a Miura sometime, and the best part about the Montreal is that it is affordable, especially when compared against cars like the Miura or even the Ferrari 365 GTB/4 Daytona.

The Pick of the Day is this 1972 Alfa Romeo Montreal finished in its original Arancio over a black cloth interior. This was the same paint color that many cars in the Alfa brochures of the era wore.

The Englewood, Colorado dealer offering this car on ClassicCars.com describes it as having only 59,400 kilometers (37K miles) from new. They add that except for the seats, which were recovered in original material a few years ago, this Montreal is original with excellent chrome and 90% original paint. The car comes with its original keys, Italian owner’s book (plus an English copy) and a factory brochure (the car illustrated is in the same signature orange color).

They go on to say that the undercarriage of the car is very clean and that they have found no signs of past accident damage or rust. The documentation for the car includes a file of past service records as well as a letter of authentication from Alfa Storico, confirming the original colors and build date of April 14th 1972. The seller also has the DOT import papers from when the car arrived in the US in 1985. Finally, they state that the car includes a cache of Unobtanium spare parts.

The Montreal has been up and down in the market for years and one of the reasons has been due to difficulties with parts availability. While that may have been the case in the past, today there is a good supply of mechanical parts for the Montreal from vendors such as Alfaholics. Where a distributor cap used to cost as much as $1,000 you can now get one for around $200 and they are readily available.

On the road a Montreal is a true GT car with strong power and a great chassis. The one weak point is the brakes. Which were the same used on the much less powerful, as well as lighter, Alfa GTV, so the stopping power is a bit weak but not as bad as you would think. The car is comfortable, has a awesome futuristic gauge panel and the sound of the T33 derived V8 is intoxicating.

The asking price for this Montreal is $94,500 and to me represents a tremendous value in today’s ever rising collector car market. I would act fast before others realize what a great value the Alfa Montreal offers.