A Tale of Two Fords on AutoHunter

A pair of two-tone Fords 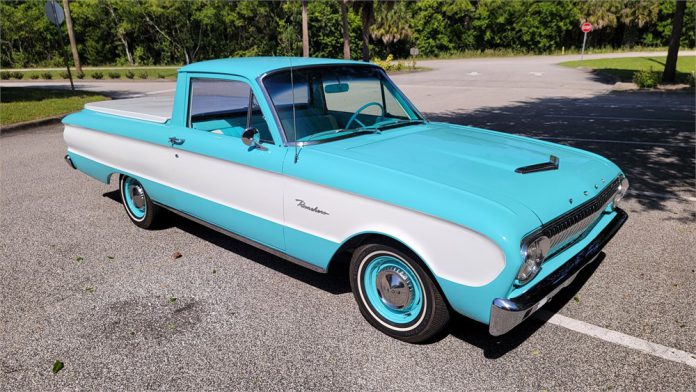 A pair of early 1960s Fords, a 1961 Falcon Wagon and a 1962 Ranchero, highlight the current AutoHunter docket and shows us the diverse uses of the platform. You could have a small truck for work, or a wagon to haul around the nuclear family.

More of a cruiser than a performance wagon, this 1961 Ford Falcon Wagon would look absolutely in its element on the beach. Endless summer vibes tend to flow when you look at the two-tone turquoise and white exterior, and it would seem proper to put a roof rack for a surfboard on top.

The interior has a front black vinyl bench seat with white piping and matching door panels. Fairly spartan, amenities are minimal with an aftermarket digital AM/FM radio, manual windows, and a a 3-spoke white steering wheel with a half-horn ring.

There is a bit of rust on the underside, and this Wagon will need some love and attention, but is the basis of a good project. Like I mentioned earlier this is a cruiser, it’s powered by a rebuilt 170ci inline-six engine paired with a two-speed automatic transmission.

I’ve rode in a 1961 Mercury Comet with an inline-six and it can take a while to get to highway speed, but it gets there.

Buy the Falcon Wagon and this Ranchero for a set of bookends in your car collection. This Ranchero has a refinished two-tone turquoise and white exterior over the upgraded and custom interior. A reupholstered bench seat matches the exterior and it has an aftermarket center console with cup holders, and unlike the Falcon Wagon it has air conditioning and a satellite ready Bluetooth stereo.

The Ranchero’s restoration is further along than the Falcon Wagon, but it shares a kinship with its older sibling; similar profile, stance and the overall vibe is the same. And like the Falcon Wagon it’s powered by a 170ci inline inline-six engine but this one has a three-speed manual transmission.

Indulge a bit and get a set of early 60s two-tone Fords. They won’t set any land speed records, but that isn’t their purpose, they’re born to cruise.

With today’s doom and gloom, it’s worth a look to see how Detroit handled 1970’s economic downturn