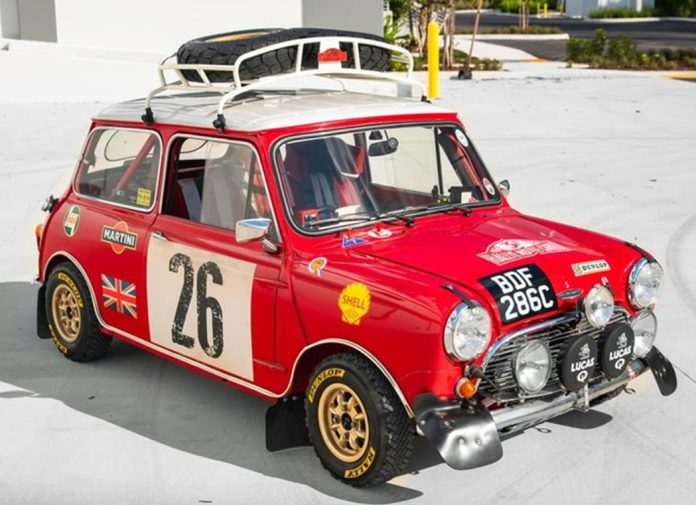 After too many viewings of The Italian Job, original and remake, I came to appreciate the nimble qualities of the Mini Cooper, and eventually I bought a 2015 model. It has served me well, but I haven’t had the opportunity to drive it on the roof of the Palavela building or in subway tunnels.

I’m ok with that. I usually drive slowly, and I don’t foresee a racing career at this stage of my life. If I do change my driving style, or start participating in motorsports, I might consider a Mini Cooper with a strong racing pedigree.

The Pick of the Day could fulfill that ideological change. It’s a 1965 Austin Mini Cooper S (click on the link to view the advertisement) offered by a dealership in Fort Lauderdale, Florida, advertising it on ClassicCars.com.

“This is an original 1965 right-hand-drive Austin Mini Cooper S (MK 1 series),” the dealer states in the advertisement. “The car is a FlA registered/ homologated historical rally race car with significant racing history. It was transformed into Group 1/A specification by renowned Pip Carotte’s Gainsborough workshop.”

After spending nearly a decade in a museum, the Mini Cooper received a 4-year restoration that commenced in 2016 with an overhaul of all mechanical systems, the seller says. The undercarriage and engine bay were stripped to the metal, repaired, and repainted. Documentation of the restoration and racing history is included with the sale.

“It was acquired by the museum right after it finished an off-road rally in England circa 2008,” the listing states. “It was showcased at the museum in the same state that it finished its last race; with mud all over the undercarriage, engine bay and trunk.”

The red exterior and underside have been redone, and the body still has minor racing marks.  This Mini has a race-ready interior with a pair of red-and-gray racing seats up front and a matching rear bench seat. Under the hood is a rebuilt S-type 1,275cc inline-4 engine built to race specs by Osborne Automotive Preparation. The big bore, short stroke-type engine features twin SU carburetors and generates 95 bhp at 5,800 rpm. The engine is paired with a 4-speed close-ratio manual transmission and a 4.1:1 differential.