Pick of the Day: 1964 Pontiac GTO with period drag-racing history 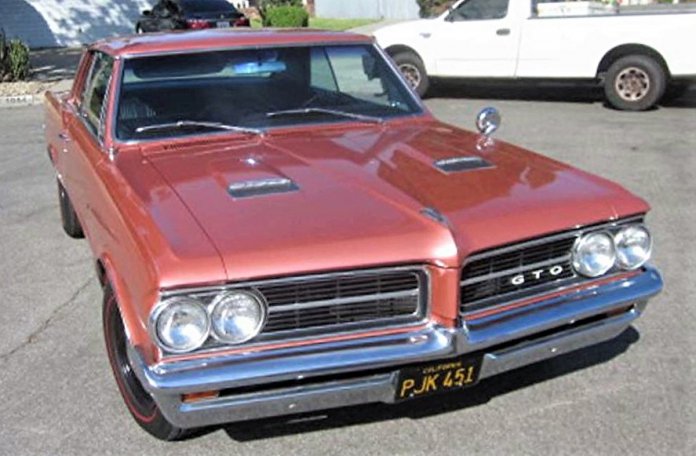 Finding a classic car with a well-documented racing pedigree is not a simple task. Claims can be made but without documentation, it might have not happened or maybe the facts get modified over the years as memories fade.

The Pick of the Day is a Sunfire Red 1964 Pontiac GTO that spent 1968 and 1970 racing in the Winternationals in the Stock “D” Class and a considerable amount of time racing at Southern California drag strips in the mid to ’60s. With the sale of the vehicle is a sizable amount of 8mm movies and 35mm slides showing the car in its element, time slips from various drag strips at which it raced, and Winternational brochures with the driver and car listed.

“Rare Sunfire Red color (factory discontinued after 6 months due to lack of interest),” the Anaheim, California, private seller says in the ClassicCars.com advertisement. “Believed to be the lowest-mileage Sunfire Red Tri-Power 4-Speed in existence. It is also estimated that less than 5 Tri-Power 4 speeds were built in this color.”

Known as “The Old Goat,” it raced in the Southern California quarter-mile scene at Riverside Raceway, Santa Maria Drag Strip and the Lyons Drag Strip until 1970, when the original owner red-lighted at the Winternationals and retired it in frustration, the seller says. It sat for 21-years, and the next owner held on to it for 28-years and got the Goat repainted in its original color.

The GTO has its original black interior, and the seller states that the back seat was used only once by a pair of kids. To further verify its pedigree, the original owner’s manual and warranty book with Protect-O-Plate are included, the seller notes.

The sale of this Goat includes the original spare, jack and instructions on the “trunk sticker.” Spare cams, lifters and an aluminum flywheel are included, as are the original M&H drag slicks, bell housing and the dual exhaust system, sans mufflers.

After 57-years, the car looks solid and straight, and the redline tires with chrome wheel covers add to its vintage flavor.

The asking price is $110,000, or best offer, and it’s a good opportunity to own a well-documented GTO with a strong racing pedigree that has been off the market for 55 years.