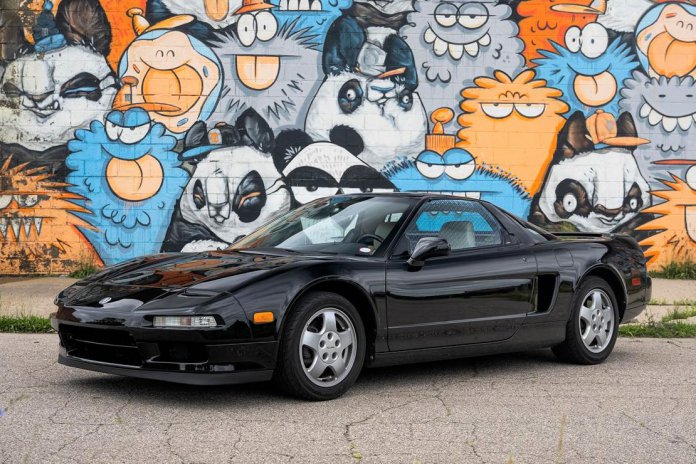 The Pick of the Day is a 1991 Acura NSX originally purchased by Kevin Eastman, the co-creator of the wildly famous comic “Teenage Mutant Ninja Turtles,” and the car’s well-maintained with just 50,512 original miles driven from new.

“In today’s market, Japanese cars have been increasing in popularity amongst collectors in recent years, and the NSX is among the JDM classics leading the way,” says the Philadelphia dealer advertising the car on ClassicCars.com.

Acura began prototyping the NSX in 1984 when the Japanese automaker gathered a notable team of designers, engineers and drivers, including Ayrton Senna, Masahito Nakano and Shigeru Uehara, to create a vehicle that would rival the V8-engined Ferraris of the time.

After years of testing, the production vehicle was unveiled in 1990 and a special factory opened in Japan to begin assembly.

A notable feature of the NSX is that it was the world’s first mass-produced car featuring an all-aluminum body.

Production on the first-generation NSX ran until 2005 when a drop in sales forced Honda to cancel the program. Over 18,000 models were made worldwide and around 8,997 ended up in the U.S.

This 1991 NSX example is finished in its original and rare color combination of Berlina Black exterior paint and an ivory leather interior. According to the dealer, less than 500 cars in this combination were made for this model year.

The long-tailed body features pop-up headlights, all original glass, a rear spoiler integrated in the quarter panel and deep side vents on both sides.

“On the original window sticker, which is included with the sale, a very special doodle is present,” the dealer adds.

Eastman drew a Ninja Turtle, wrote “Love the NSX!” and added his signature at the bottom.

Powering this two-seater sports car is a 3.0-liter V6 engine factory rated at 270 horsepower and paired with a 5-speed manual transmission.

“Kevin acquired this NSX in the early 90s at the height of his career shortly after creating the show many of us grew up enjoying!” the dealer says. “Eastman owned the car through 2016 at which point it changed hands to its second owner who resided in Ohio. At the time it showed 47,211 miles on the odometer”

“This mostly unmodified example presents very well and drives even better,” the dealer says. “The car is well-maintained and represents an excellent driver-quality NSX, finished in desirable colors, with a fun and nostalgic history. This NSX would make a great addition to any collection, or a fleet of ’90s JDM cars.”