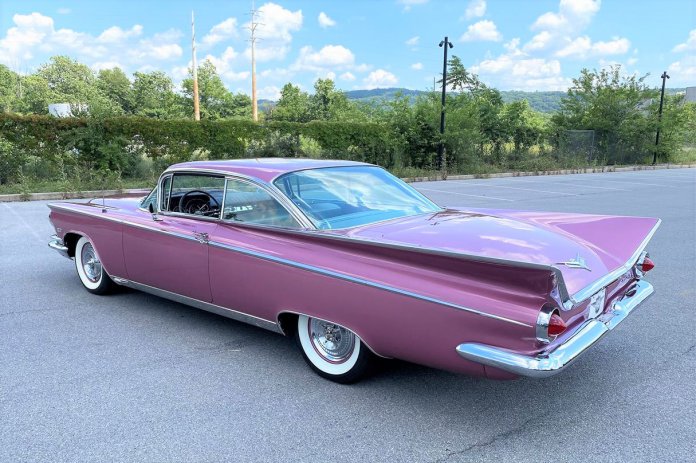 In response to Chrysler’s impressively designed 1957 models, Buick did a complete overhaul for its 1959 line with the Special becoming the LeSabre, the Century renamed the Invicta and the introduction of the Electra that replaced both the Super and Roadmaster.

Buick also said goodbye to some of its most recognizable design elements, including its signature portholes and tooth-comb grilles and introduced its prominent tailfin design – a bold new style that made the Electra one of the best-looking cars of 1959.

The Pick of the Day is a meticulously restored 1959 Buick Electra that’s just 1 of 11 examples in existence known to the Buick registry.

“Given the cost and complexity of restoring such cars, it is rare to see one presented as pristine as this,” said the Allentown, Pennsylvania, dealer advertising the car on ClassicCars.com. “The model is finished in a wonderful Lido Lavender paint in excellent condition, with no flaws to speak of.”

Finished in the correct factory color, the body features sharp “Delta Wings” off the rear above the protruding round taillights, a chrome squared grille, dual slanted headlights, extra-wide chrome moldings and a bubble top with its extra-large rear window.

“The vast body panels are straight with an even, precise fit,” the dealer continues. “Extensive chrome and stainless trim are in excellent order with no dings, dents or pitting.”

A nice contrast to the unique exterior color, the interior is upholstered in two-tone gray “Cordaveen” (which was Buick’s evocative name for vinyl) and wool broadcloth.

According to the dealer, interior amenities include factory air conditioning, power seats and windows, and an AM radio. And while the dealer doesn’t mention these, each Electra also came standard with two-speed windshield wipers, an electric clock, trunk light and cigar lighter.

Under the hood is a 401cid Wildcat 445 Nailhead V8 factory rated at 325 horsepower and connected to a Buick Twin Turbine automatic transmission.

“To drive this Buick is an extraordinary experience,” the dealer says. “The laid-back driving position is perfectly suited for cruising and the 401 cubic inch fires easily with no smoke or drama. The transmission shifts into drive swiftly and rolls off on a wave of smooth torque.”

The dealer also notes that this Buick Electra, which has been “beautifully restored to show-winning standards,” won the best “Buick-Post-War to 1969” award at the 2019 Radnor Hunter Concours d’Elegance.

To view this rare vehicle on ClassicCars.com, see Pick of the Day.