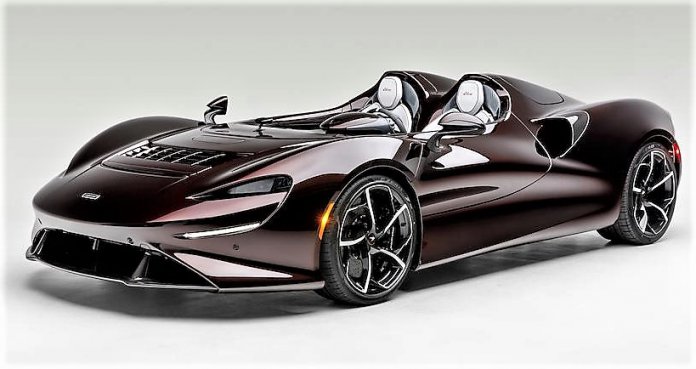 Late-model exotic sports cars are the focus of Bonhams’ Supercars on Sunset sale, which the British company calls “a contemporary collector car auction for the innovative enthusiast, tailored to presenting the most exciting high-performance, rare and powerful machines of the modern era.”

With several million-dollar offerings from McLaren and Saleen among the 32-car-docket, the event will be held April 8 and 9 at the Petersen Automotive Museum in Los Angeles.

Leading the pack is the wild 2020 McLaren Elva, a roofless speedster made of lightweight material and powered by a twin-turbocharged 4.0-liter V8 that churns 804 horsepower.  The very low profile is accentuated by the car’s lack of a windshield.

“The McLaren Elva depicts this ultimate driving emotion where the F1 had left off many years ago,” Bonhams says in the catalog description. “McLaren had set out to build a vehicle so powerful, so lightweight and delivering a completely different driving experience than any of their other vehicles offered.”

Another ultra-exotic McLaren at Bonhams is the 2019 Senna GTR, the 21st of 75 created. A 4.0-liter twin-turbocharged V8 rated at 814 horsepower powers this 2,800-pound sports coupe. With just 50 miles on its odometer, the Senna – named for the late Brazilian F1 great Ayrton Senna – is also valued at $1.7 million to $2.1 million.

From Saleen comes a rare 1,000-horsepower 2007 Saleen S7-LM, a home-grown California supercar. One of only three examples of the special-edition sports coupe built, its estimated value is from $1 million to $1.3 million.

The Saleen is a one-owner car driven just 300 miles since new, Bonhams says.  The supercar, with a reported top speed of 248 mph, is finished in silver with a black leather interior, aluminum and yellow accents, butterfly doors and an adjustable rear spoiler.

Other spectacular supercars will be offered by Bonhams from such brands as Ferrari, Lamborghini, Porsche, Mercedes-Benz, Aston Martin and Rolls-Royce.  The values range from the seven-figure models to more affordable examples of special cars, such as the 1975 Datsun 280Z in survivor condition with just 8,700 miles on its odometer and valued from $30,000 to $40,000.

For more information about Supercars on Sunset, visit the Bonhams website