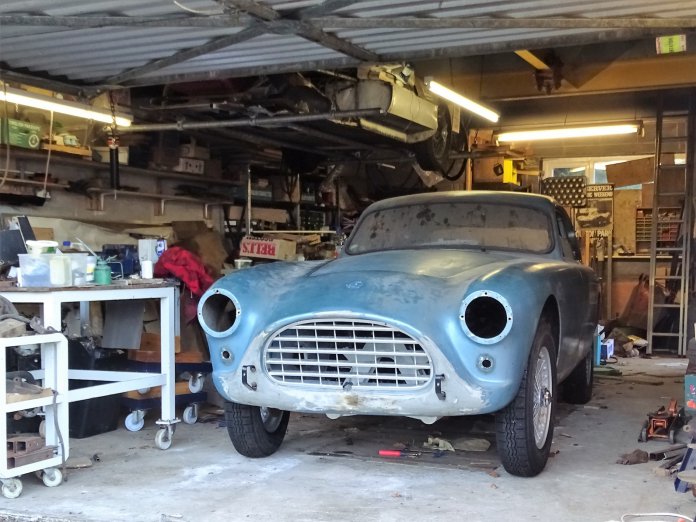 The late amateur racer and motorsports historian Terry Harrison was a navigator/co-driver for the BMC works team, and three restoration projects from his garage highlighted the H&H Classics no-reserve auction held earlier this week.

H&H reported a bidding war for the Aceca, which was “partially disassembled” but in “highly original” condition. The more expensive of the Lotus Elevens was a 1956 Series 1 “Le Mans” racer that had crashed in 1975.

Overall, the auction posted sales of more than £1 million ($1.378 million) with an 85 percent sell-through rate. H&H Classics reported 800 bidders participating online, and from as far as Singapore and the US.

“The content of this garage was a motor racing treasure trove – an AC Aceca Bristol and two Lotus Eleven racing cars,” said Damian Jones, H&H head of sales. “All three were sold as ‘garage finds’ in varying states of completion. Given the regard in which Terry was held by those who knew him I am not surprised by this interest in his automotive legacy.”

The AC Aceca Bristol was chassis BE786 and originally was earmarked for distribution through Ken Rudd of Ruddspeed fame. It was finished in Princess Blue paint with red leather upholstery. Its first owner was Boyce Ian David Davis, a research chemist who kept the car until 1969 when he sold it to Harrison, who drove it in hillclimb events and as his daily driver for several years.

Only 88 right-hand-drive Acecas were produced, and Harrison’s was one of only 12 with the more powerful 100D2 Bristol engine, overdrive transmission and front disc brakes.

“The origins of the chassis are currently a mystery, but ‘N.W. 204’ should not be confused with ‘204’ which was supplied new to Ed Freutel of Los Angeles and is still apparently resident Stateside (though, another ‘204’ surfaced on this side of The Pond during the 1990s),” H&H noted.

“The engine listed on the green logbook and which still accompanies the car (FWA 6577) is understood to have been first installed aboard the ex-Gerard ‘Jabby’ Crombac Lotus Eleven (‘152’) and then transferred to the ex-Le Mans 750cc Lotus Eleven (‘519’). The latter still exists in Australia albeit with a different powerplant.”

Harrison raced the Lotus on tracks and in hillclimbs in the early 1970s but retired the car after a shunt in the Thurxton chicane.

Harrison reportedly had a passion for Lotus Elevens. H&H said he owned two Series 1s and a Series 2, though the Series 2 car was stolen “many years ago.”

“The second Series 1 (a circa 1956 machine) fared rather better having been stored in the rafters of his garage. Less complete than its sibling, it nonetheless comprises a chassis bought from Geoffrey Crossley, a Coventry-Climax FWE 1.2-liter engine, MOWOG four-speed gearbox and desirable 5.3:1 rear differential. Incomplete and in need of a total restoration, the Eleven nevertheless has the makings of an exciting project.”

For more details on the auction, visit the H&H Classics website.

Top tips for success when selling a collector car at auction