Video of the Day: Would you ride this?

The Jade Warrior is pure innovation and pure insanity 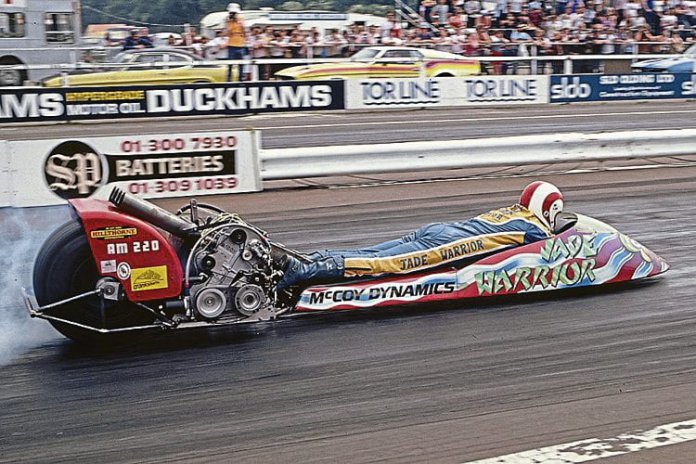 My friend and former colleague, Andrew Wolf, editor at Dragzine called the Jade Warrior “a two-wheeled, automotive-powered sled.” I must give him props with the great use of adjectives. Mine is just, “insane.”

Thirty-five years ago, a British Hall of Fame Motorcycle racer named Angus MacPhail built this bizarre contraption for the quarter-mile. Considering it was a sub-eight second machine that hit nearly 200 mph at the beam, one can call it innovative — but would you go for a ride?

Jade Warrior had a monocoque frame, a scooter wheel on the front and a massive drag slick on the rear. It was powered by an inline 4-cylinder Ford Cosworth making between 400-500 hp. The rider lays down, head first on the body which was designed with ground effects to keep Angus from launching into space.

MacPhail, who sadly past away in April 2020, had been playing with aerodynamics and design with both cars and motorcycles long before the Jade Warrior. Considering he also rode these crazy contraptions proved he had 20 pound Brunswicks in his pants. In 1985, there were still a great deal of innovative ideas in F1, IndyCar, drag racing — heck, even NASCAR!

When one looks at the spec formulas that pervade most of big time racing today — it’s always fun to look at the past. It makes me wonder if man had been left to his own devices, without complicated rule books, over-protective sanctioning bodies and spec formulae, how fast would we be going today?

Jim Cantrell, racer and rocket scientist, gets a gold star this week for turning me onto this cool video.