Driven: Lancia Integrale Evo 2 can now be imported – and worth the wait

But now you can bring in cool cars from the mid-‘90s without all that hassle because they are now considered classic or antique. We can now get our mitts on machines we have lusted after, but which never made it to our shores.

Are they worth the wait?

In the case of the Lancia Integrale Evo 2, the answer is a resounding, “Hell, yeah!” 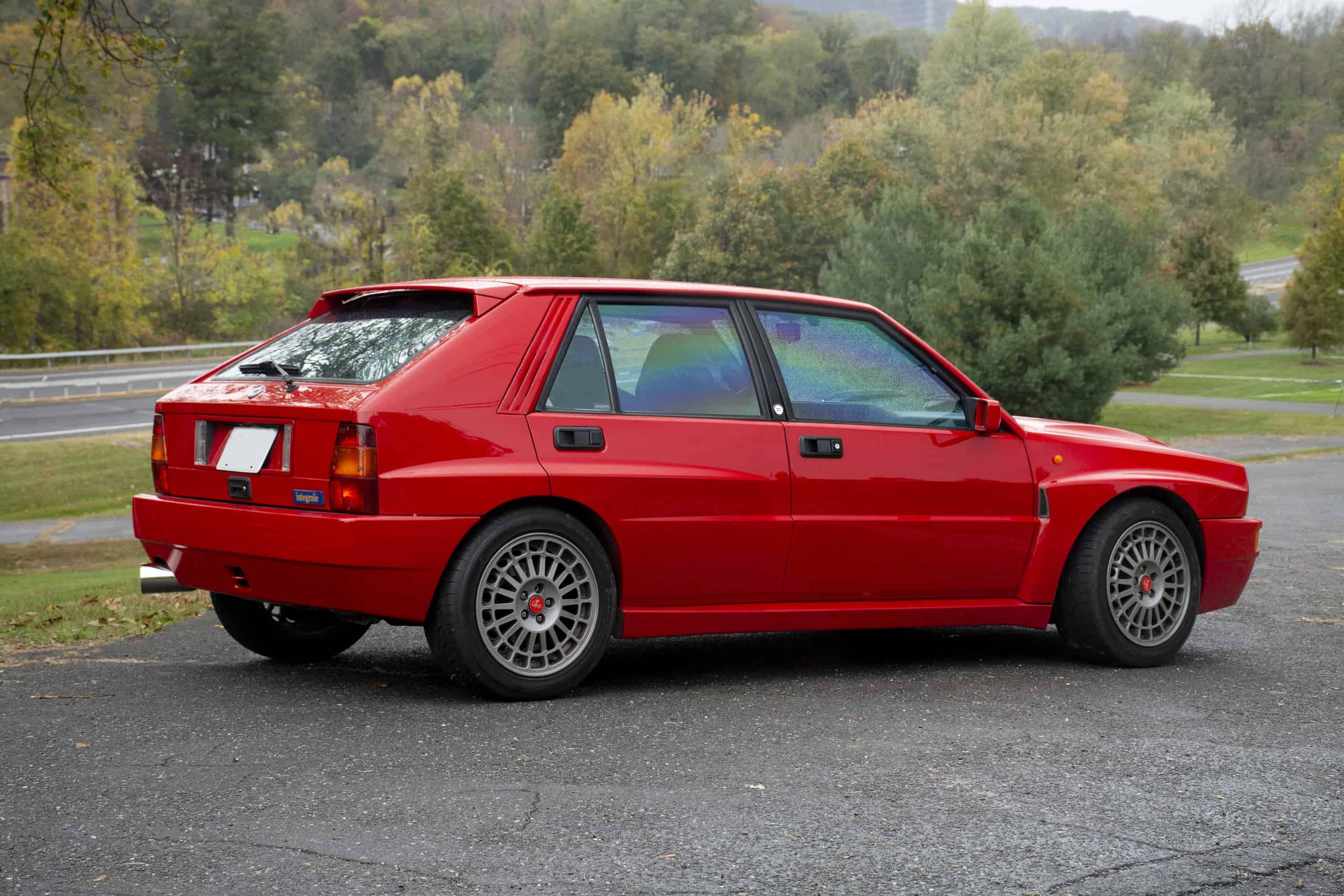 First a bit of history. Lancia wanted to get into the market that VW Golf was dominating. Giorgetto Giugiaro who had designed the Golf gave Lancia their own 4-door hatch, the Delta, that debuted in 1979. By the ‘80s, there was the Delta H,F a turbocharged front-wheel-drive “Hot Hatch.”

During that time, the Delta 037 was running in Group B in World Rally competition.
But all the cars were going towards 4-wheel drive while the 037 was driven only by its rear wheels. In response, Lancia created the Delta S4, an all-wheel drive mid-engine monster. But it just never grabbed the podium away from the Peugeot 205 T16. 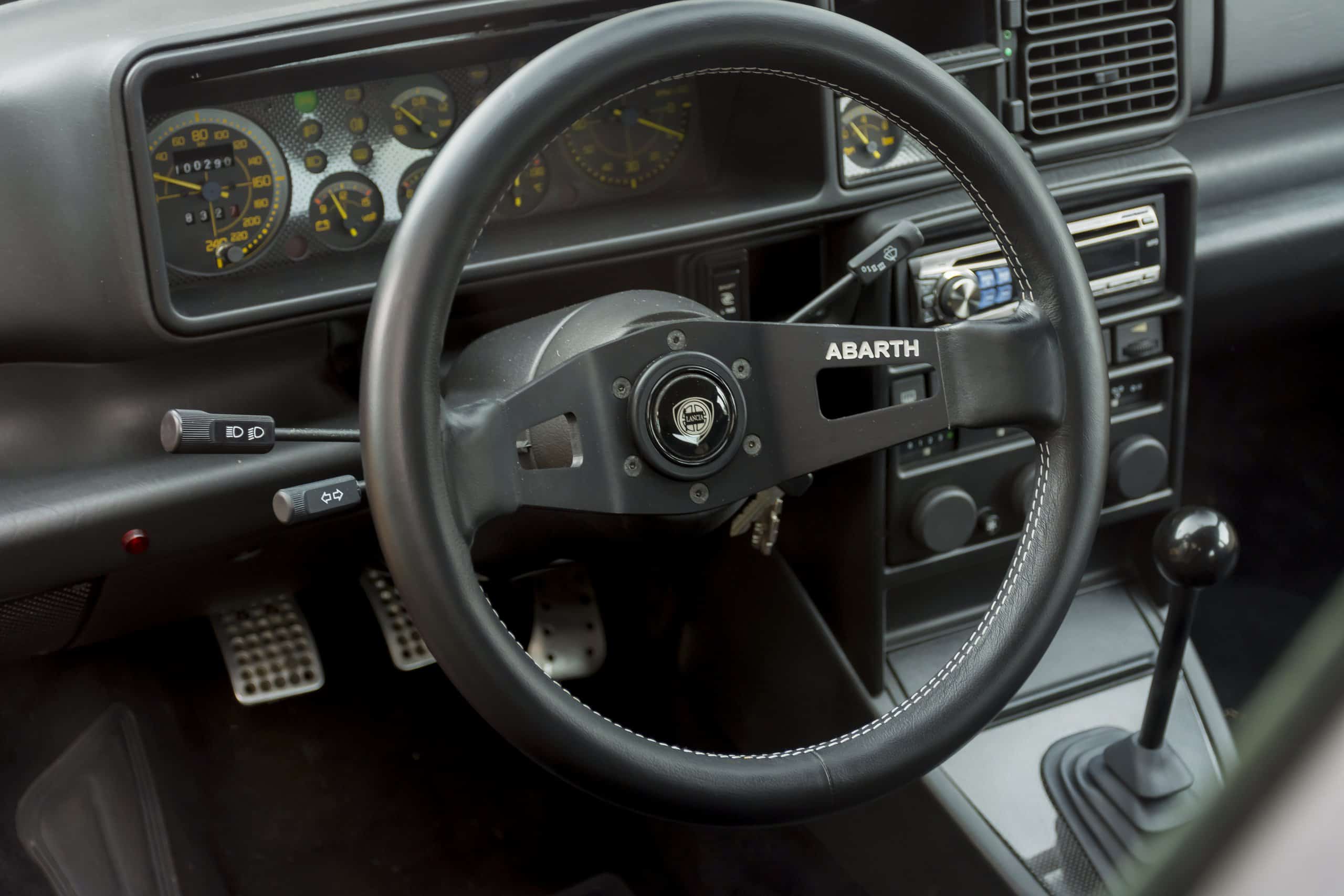 The exotic machines of Group B were fast, furious, popular, competitive and ridiculously dangerous. Numerous serious accidents brought an end to Group B competition in 1986.

Group A was then the way to go. Group A comprised production-based cars with a minimum of 5,000 roadgoing cars sold by the manufacturer to the public in order to qualify.

In 1987, Lancia grabbed their HF Delta, gave it 4-wheel drive and promptly won the Group A? world championship that year. They did the same in ‘88. For ’89, Lancia gave the car a 16-valve head and won again. Lancia had the same outcome in ‘90 and ‘91. Other cars were nipping at Lancia’s heels, so the Evo 2 was created. 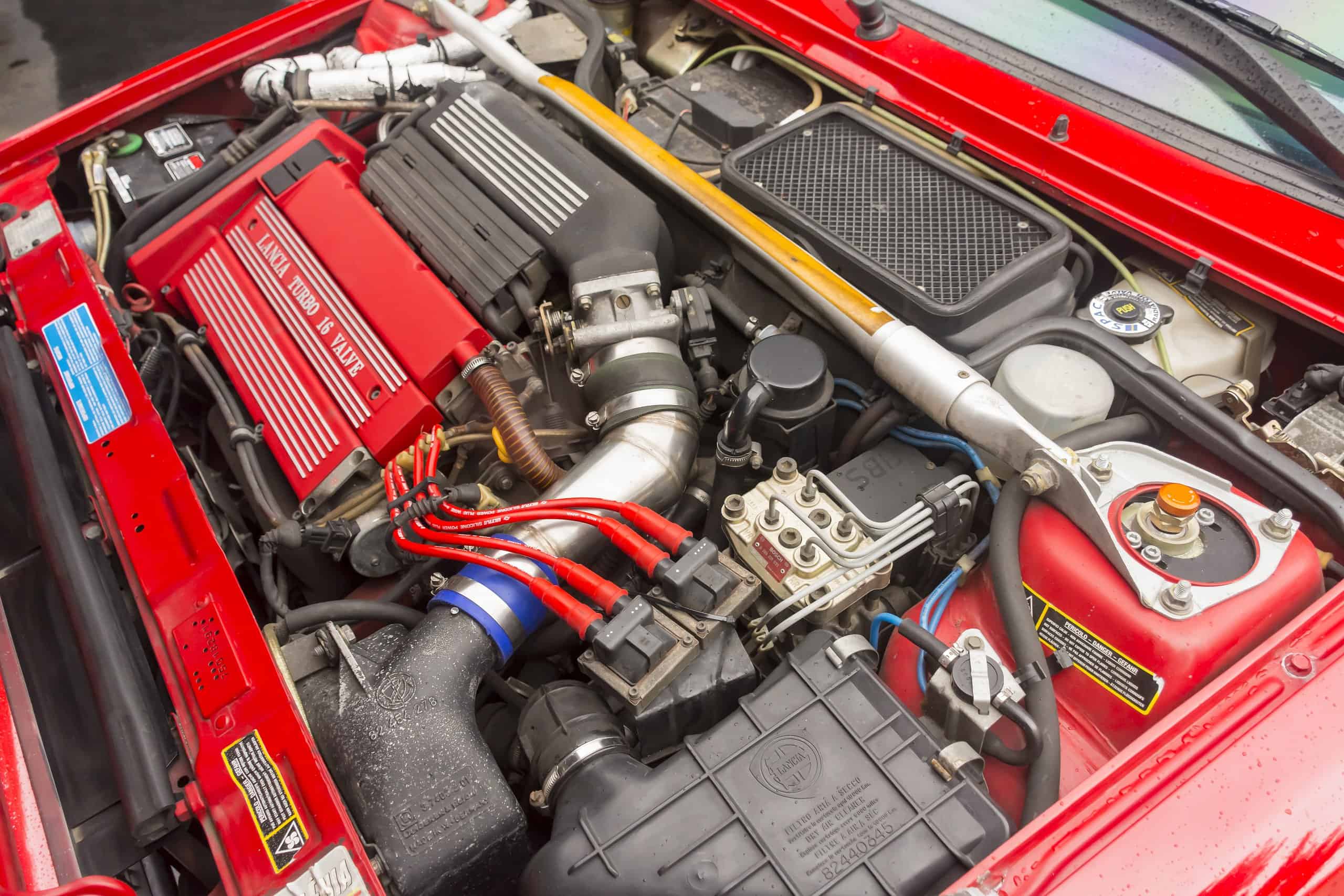 Lancia no longer felt the need to compete with a works entry, so it suppled cars to Martini Racing, which went out and won the ‘92 season.

The Delta HF Integrale became the winningest rally car of all time.

And did the US get to play rally driver with these little screamers on our favorite back roads? Nope. But now we can make up for lost time and import one of these bella machinas.

Think of the competing cars from this period. You could have been playing with Germany’s Volkswagen GTI all along. Same with Japan’s WRX. You could bring in a Peugeot 205 GTI with all its Gallic quirkiness, There Is also another homologation special, the Ford Escort Cosworth RS. 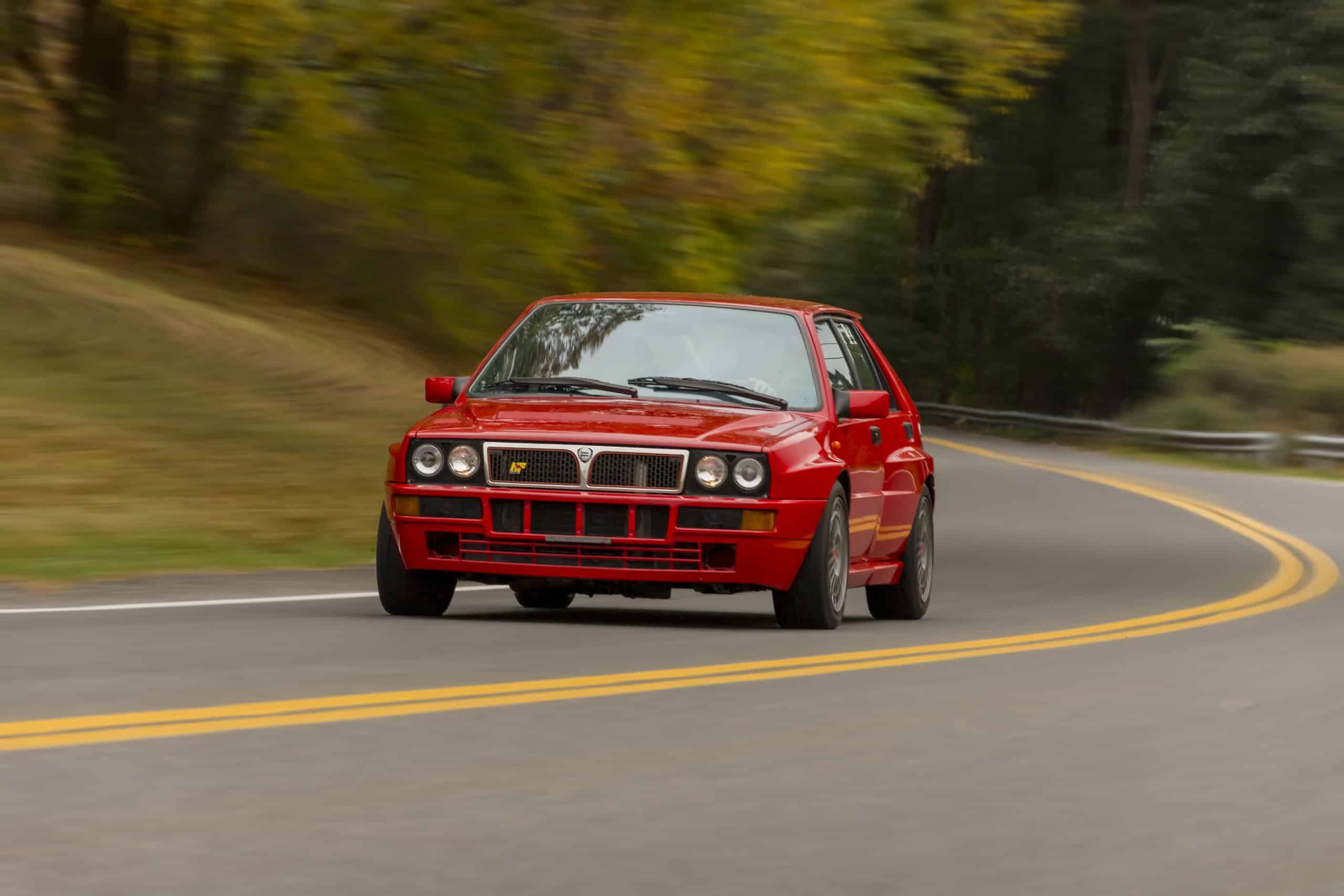 Then there is the machine we’ve been talking about, the 1992 Lancia Integrale Evo 2, brimming with Italian attitude.

The Lancia stands out from the others. Even though it shares its designer with the Golf, the Evo 2 somehow exudes a passion where its German counterpart has a Teutonic reserve. The Subaru seems almost practical in comparison, and the Peugeot almost blends into the background.

The Ford, while spunky, just doesn’t wind me up the same way. There is an undercurrent with the Lancia that even with four doors doesn’t stem the tide of Hot Hatchery.

The Lancia just feels right. The cloth-covered Recaros hold on to you as you slide through turns, and the peddles are set just right for a bit of heel and toe, and the steering-wheel position makes sure you remember you are in an Italian car. 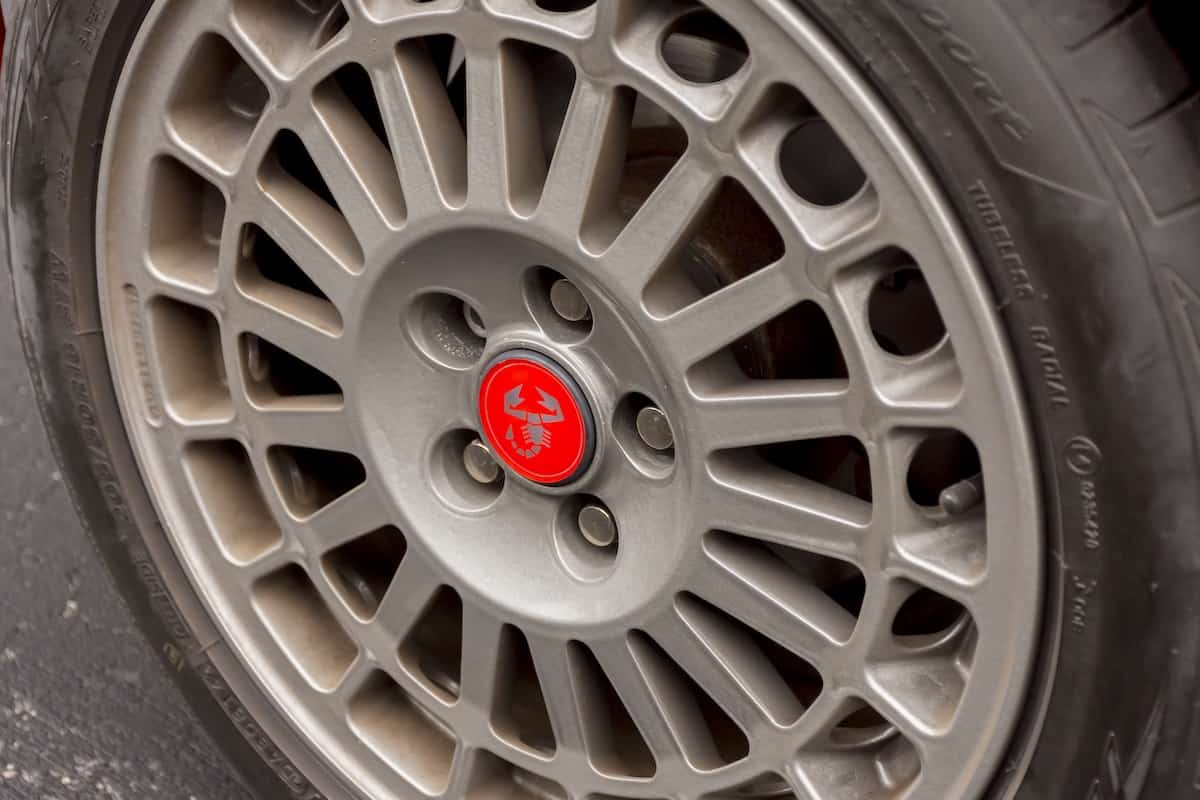 The gauges keep your eyes roving as the speedometer on your left starts its clockwise spin at 9 o’clock and the tach on the far right heads clockwise at 3 o’clock. Best to keep your eye on the tach, listen to the motor and let the guy behind the blue lights what’s this mean? sort things out.

The transverse-mounted 2-liter turbo comes to life at 3,000 rpm and the boost stays with you right up to the redline. The power has been stated as 208 horsepower and 227 pound-feet of torque, but it feels like more than that is working under the sculpted hood, even when pushing around 2,954 pounds of car. It will get the Lancia from 0 to 60 in 5.5 seconds, which was the equivalent of a Ferrari 348 of the same period.

The 4-wheel-drive system’s central differential sends 53 percent of the power to the rear wheels and the other 47 percent up front. Those percentage amounts change depending on demand. And the suspension with extra travel and extra wide track keeps you well attached to Mother Earth with no histrionics. The steering is nicely weighted and give great feedback, you can just chuck it around and it comes back for more. 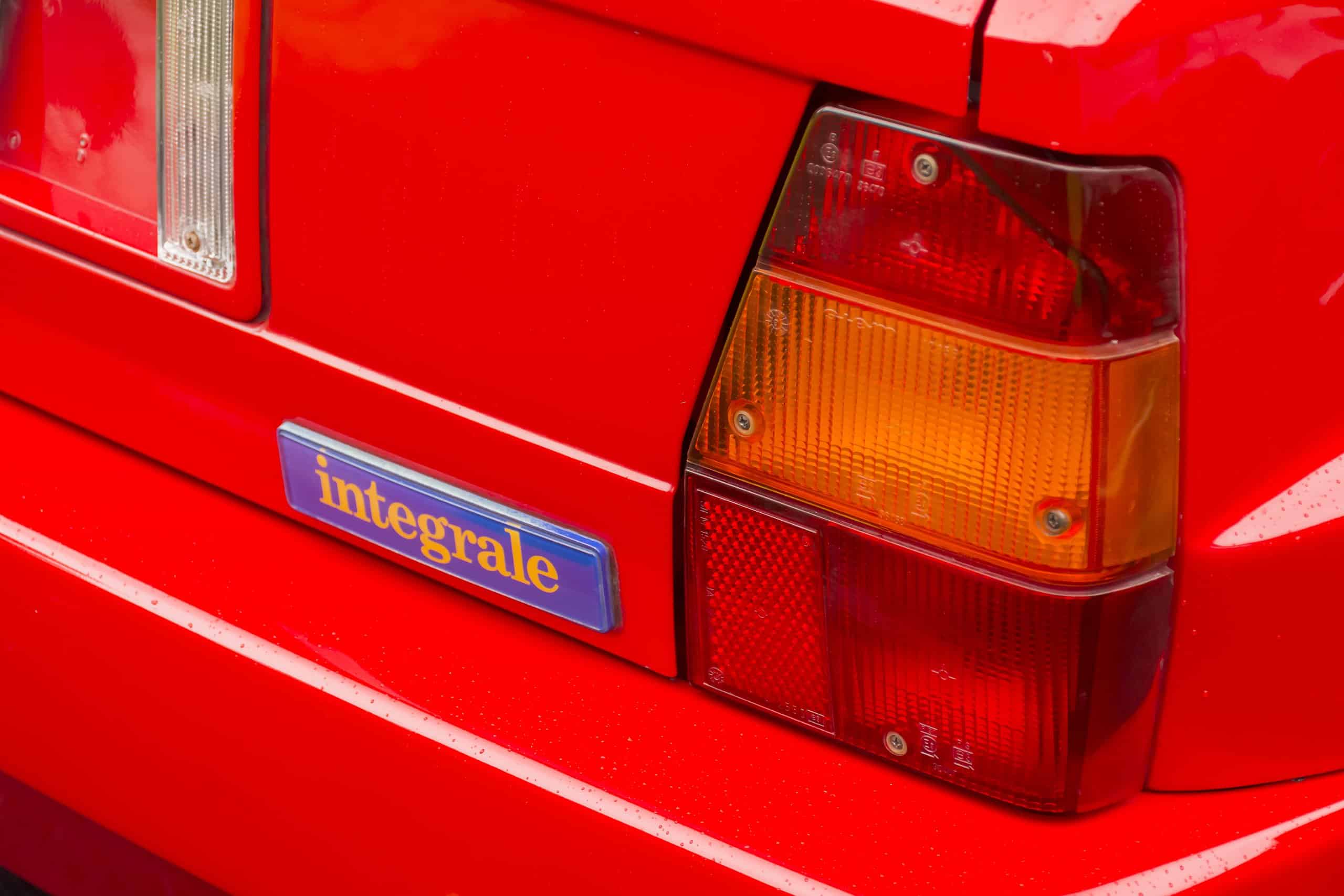 A couple of minor flaws: shifting can be a bit clunky, but you can adapt to that easily enough; there is little or no dampening material in the dash so it creates a real racket; and the switches. like other Italians of the time, are made of cheap plastic. But these minor infractions are by no means deal breakers.

But you do have to remember it is an Italian car and there is a good chance you will be looking real good as you sometimes stand by the side of the road. But when it’s doing what it was built to do, you will be smiling and giggling like a mad man as you transform yourself into your favorite rally star on your favorite (rally stage) road. 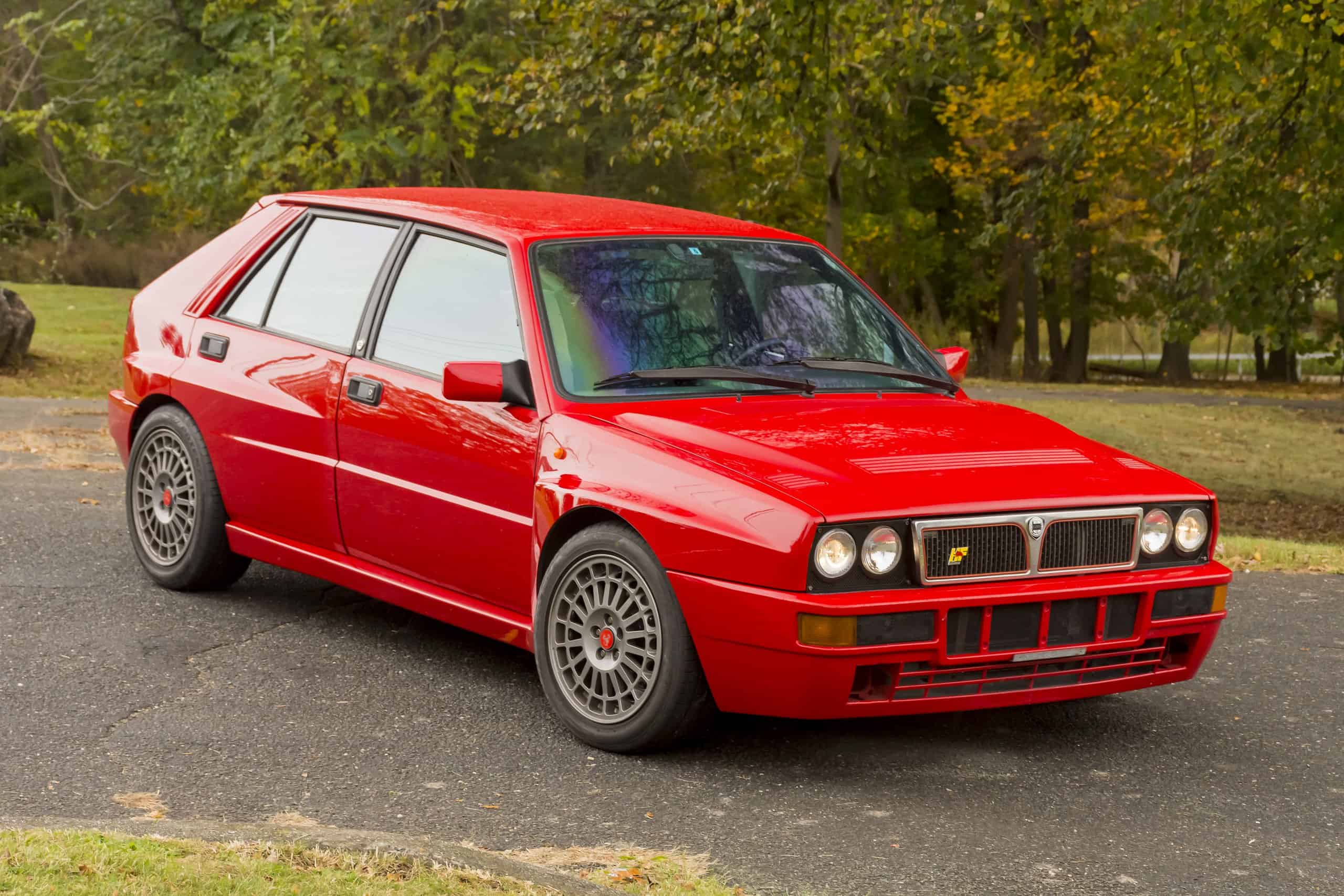 It’s been said that you should never meet your heroes. They may not be what you thought they would be, the reality is nothing like your fantasy, your bubble is burst and you are completely let down.

But not if your hero is an Evo 2. It’s a bigger-than-life little car with the guts and grit of a legendary rally champ, and it makes the wait all worthwhile.