Picking your battles on the street is imperative as this car is a tempting 3,700 pound mass of probable cause

The Chevrolet Camaro is an institution. Its lineage comes from a great period in automotive history – the pony car wars of the mid-to-late 1960s. The Mustang, the Challenger, the Barracuda, the AMX, the Firebird – 2+2 muscle. These ground-pounders fueled the highly competitive and immensely popular SCCA Trans-Am racing series, as manufacturers fought to “win on Sunday to sell on Monday.”

Today, the latest ponies are super powerful, technologically advanced and still nod to their ancestors in the way they look and excite the senses.

For a week – and only 532 miles – I got a chance to spend quality time behind the wheel of the 2020 Camaro 2SS. 2SS, you ask? The “two” moniker refers to the trim level. It has the V8 power – 455 horses to be exact — but also the luxury refinement of the LT. It really is a very comfortable car – unless you require using the back seat. 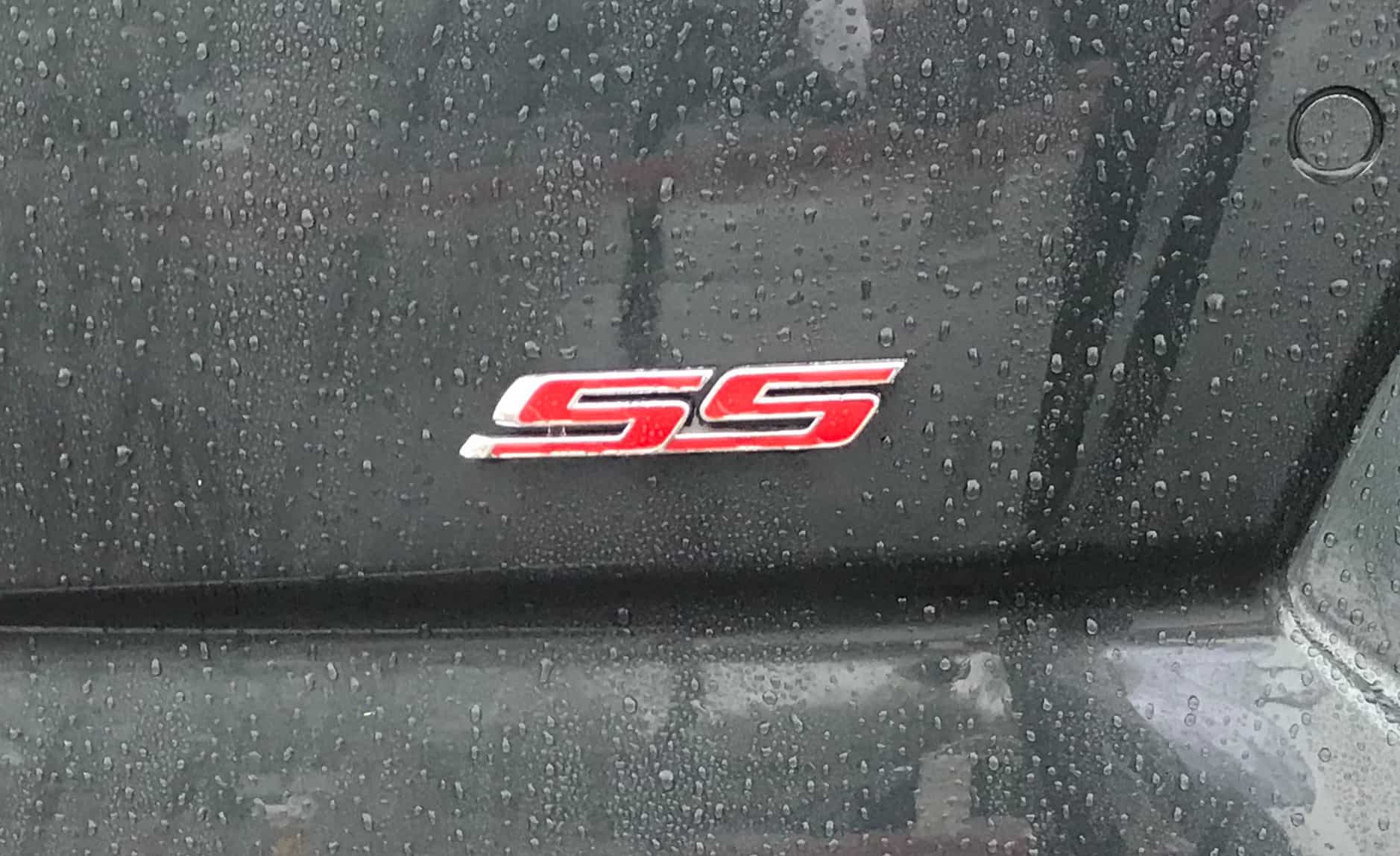 The rear seats are merely an ornament. If you are taller than 5-foot-3 forget it. I was reminded of the long trip to Disney World in 1972, sitting on a stack of phone books in the back of my parents’ 1970 Camaro RS. At age 4, it was plenty comfortable.

Many years ago, I had a fourth-generation (F4) 1993 Pontiac Firebird, complete with the 5.7-liter LT1. It was a nice car – making a whooping 275 horsepower at 325 pound-feet of torque. The sixth-generation car in my hands today is not your father’s LT1. This engine is a 376 cid (6.2-liter) small block with direct injection. It’s throw-your-head-back-in-the-seat acceleration (and for those who dare: launch control), with far more refined handling.

Having a car like this in your hands is very tempting. Especially for a “red-mist” motivated racer-type like me. The growl of the four exhaust tips from the LT1 virtually beg you to get on it. Sadly, aside from a racetrack, on which I did not get a chance to go play, there are few places around metro Phoenix to really stretch the car’s legs. It had all the makings of felony reckless driving – and I do believe they still have the death penalty in Arizona for traveling double the speed limit (not really – ed).

Did I get the car into the three-digit range? For sure, but journeys into the car’s real power band were few and far between. The run up to 60 mph takes a mere 4 seconds, and despite a 200-mph speedo, the top speed is rate at 165 mph.

Unlike the previous generations of great pony cars, this “Bitchin’ Camaro” passes everything and the occasional a gas station. I watched in amazement as the gas gauge – a computer-generated analog-looking dial — moved fast enough to be detected by the naked eye every time I got on the loud pedal. Despite my watchful eye on the gas gauge for the full 533 miles I possessed the car, I averaged 18.2 mpg, which is not bad considering the amount of umph. Needless to say, spirited driving and regular use of the electronic track mode will easily put mpg into the single-digits. Interestingly, the Camaro was mostly used in my daily 9-mile side street commute to the ClassicCars.com offices and back – at a smoking cruise-controlled 41 mph! The car was practically at idle.

It also made the trip to Scottsdale, Arizona’s monthly Cars and Coffee, which indecently frowns on displaying modern pony cars, and to Phoenix Raceway for the NASCAR race. There are those who have these cars for dailies, but as a grocery getter, unless you love burning gas and scaring the birds (which in fact, I do), there are other choices. For the quick leaps into the fun zone, I was just glad it has big Brembo brakes to rapidly come back to earth. Undoubtedly, the Camaro SS loves to rip.

The feature that I liked most about this car was the seating position. The heated/vented black/white buckets were perfect. I personally like an upright position with lumbar and knee support – like sitting in a racing seat. The Camaro delivers in this area beautifully. I felt commanding control of the car while lulled in comfort. 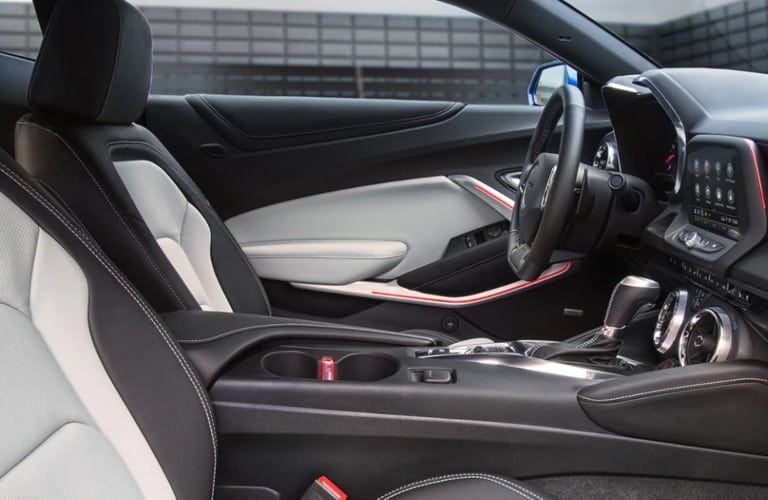 The 10-speed paddle-shift automatic transmission was amazing. It is like having 5 overdrive gears. The manual version is a 6-speed, but this monster is tamed nicely for the highway with the tall gears. Around town, manumatic shifting is not necessary as the car really has an intuitive ability to shift – and think – faster than the driver as it senses input from the throttle and steering wheel.

There are several driving modes including Touring, Sport and Track where the suspension, throttle, steering and transmission adapt to the environment and the driving style. Add to that such driver aids as traction control, it’s much harder to run out of talent – despite the fact that it is a car that can bite.

Road noise on the highway and around town on the staggered Goodyear Eagle F1 245/40ZR20 front and 275/35ZR20 rear tires was sometimes unbearable. I like a sporty car. I like the handling of low-profile sport tires that provide good road feel, but high decibel road noise can be particularly annoying. The feedback to the steering wheel was very good, but sometimes light. Clearly, the car has been well-developed since the return of the fifth-generation Camaro in 2010. 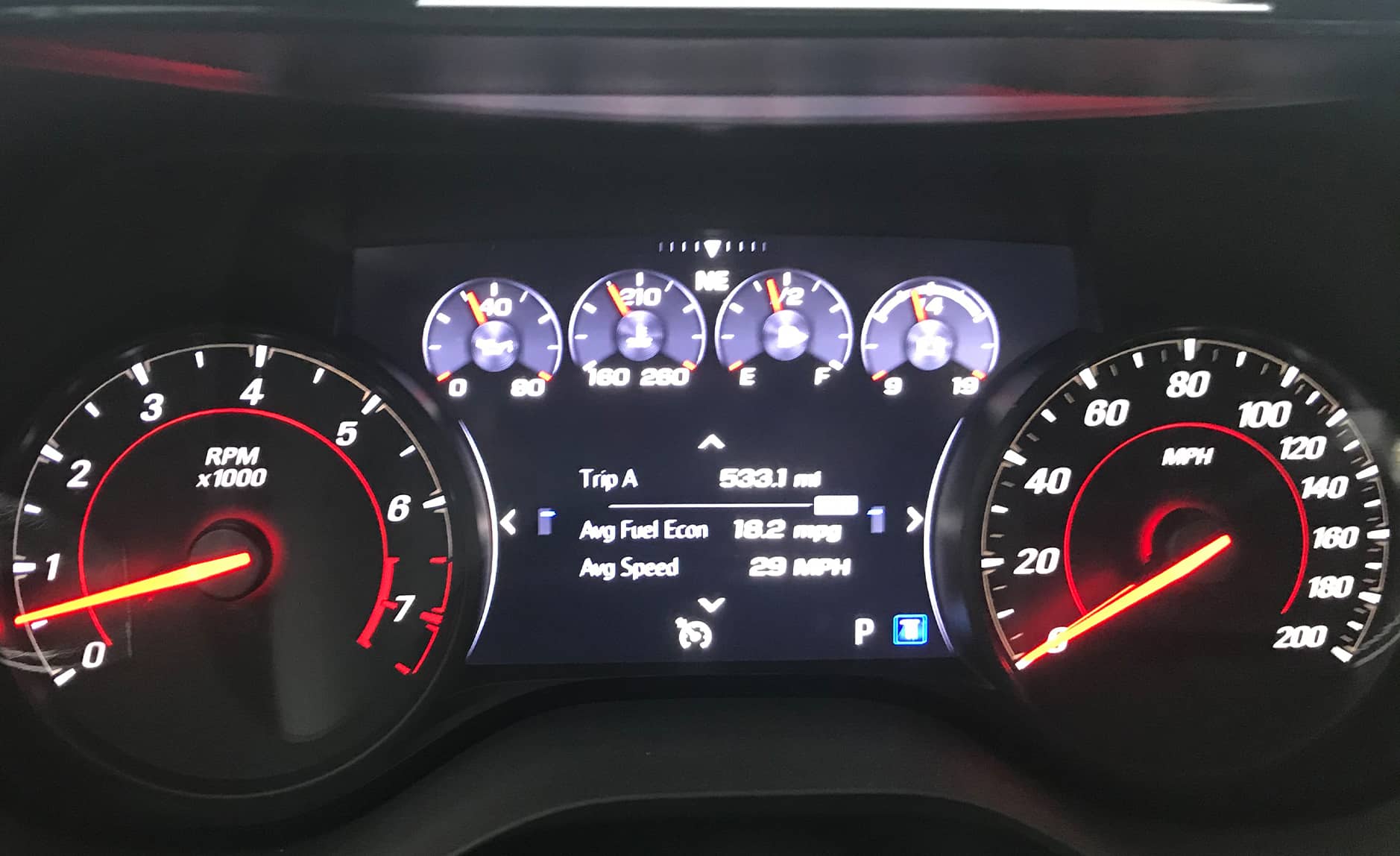 Many before me and many after will complain about the visibility from the cockpit. Thankfully there are warning lights on the side-mirrors to alert of cars in the many blind spots. That said, a bright heads-up display allows the driver to keep their eyes up and on the road with the illusion of the speed and tach floating in front of the big sloping hood.

Overall, the 2020 Chevrolet Camaro SS is a bitchin’ pony/muscle car. It’s comfortable, really fast, controllable, and the fun factor is off the charts when you pick your street battles. I wish I had the chance to track it.