Thelma’s owner is moving overseas, and she’s not going along

Pick of the Day is a 1966 Ford Thunderbird convertible 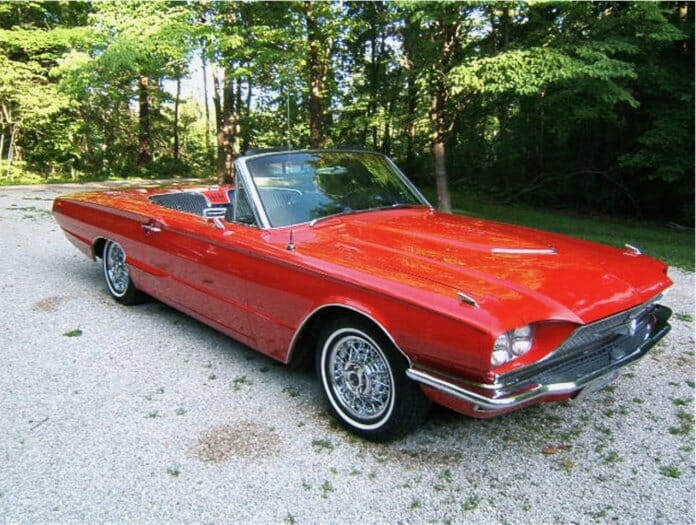 “Hi! My name is Thelma…” is how the advertisement for the Pick of the Day begins. The car is a 1966 Ford Thunderbird convertible and the advertisement, placed with ClassicCars.com by the private seller in Palmyra, Indiana, is creative, allowing “Thelma” to tell her own story.

Obviously, this red T’bird is named Thelma because of a similar car’s role in the iconic 1991 movie Thelma & Louise, staring Geena Davis and Susan Saradon, and a young actor named Brad Pitt.

“I need to find a new owner,” Thelma tells us in the advertisement.

“My current owner is leaving the country and says ‘I can’t go.’ Hmpff! After all I have done for him. All (the time) he spent inside me, the evenings we had together. Use me for 10 years, and then sell me.”

Thelma notes that she is one of 5,049 Thunderbird convertibles produced by Ford for the 1966 model year. She was ordered through Ford’s Philadelphia regional office.

“At some point, I ended up in Alaska. From there, I went to Caldwell, Idaho,” where her original burgundy color was changed to bright red. She has been in southern Indiana since 2009.

In the summer of 2013, on her way home from a car show, “a deer and I tried to occupy the same place and time. Deer died. I did however, have some body modifications — and not for the better.

“My insurance was Hagerty and they selected a very competent repair facility.” In addition to front-end work, Thelma got a new windshield “and some other repairs that a girl of my age needed.”

“I am not a garage queen. I am out quite a bit in nice weather.”

Thelma’s asking price is $37,500. To view this listing on ClassicCars.com, see Pick of the Day.