This Thor is the superhero of big rigs

“Big Mike” Harrah, helicopter-flying movie stuntman, builder of large construction projects, drag racer, drummer with a long ZZ Top-style beard and, at 6-foot-6 and around 270 pounds, earns his nickname both in stature and lifestyle, hears that a pair of massive V12 diesel engines are coming out of a 300-foot yacht and, of course, he has to buy them.

But then he has to figure out what to do with them.

“I have more dollars than sense,” Harrah announces several times as he welcomes the crew from the Jay Leno’s Garage television show, a couple of folks from Worldwide Auctioneers and a tagalong journalist to his base at the Lake Havasu, Arizona, Municipal Airport, to show and to demonstrate what he did with those engines.

What Harrah did was to create Thor, a gigantic (nearly 40 feet in length) semi-style tractor truck that not only carries those big V12 engines but tops them with 12 superchargers and adds a jet engine from a Hawker 800 business aircraft behind the cabin just to power the truck’s electronics. And, believe it or not, it is street legal.

The truck, perhaps the ultimate expression of the American over-the-road trucker’s dream machine, will be offered for bidding November 23 at Worldwide’s collector car auction being staged as part of the inaugural Global Auto Salon in Riyadh, Saudi Arabia.

Except the auction came together so quickly and Thor is so massive that the truck won’t be at the auction. Instead, it will be showcased via video and the winning bidder will be invited to take delivery of the truck at Leno’s garages in Burbank, California, where a personal tour of the car-guy entertainer’s collection will be just one of the perks provided Thor’s next owner.

Harrah may share his last name with the car-collecting hotel magnate Bill Harrah, but “Big Mike” is the son of a machinist and a school teacher. After high school in Southern California, his career goal was surfing, so he moved to Hawaii and worked at a pineapple plantation until he realized that wasn’t the lifestyle he’d imagined.

He moved back home and worked construction, framing houses in Orange County and building apartments in Riverside.  Eventually he started his own company, Caribou Industries, and was developing real estate and resorts both on the mainland and in Hawaii. He and his company played a major role in the re-development of downtown Anaheim.

Meanwhile, Harrah was flying his helicopters, setting water-skiing records, building fast custom cars and motorcycles, drag racing and, well, crashing and nearly dying in a helicopter.  While flat on his back recuperating, he had the construction plans for his next project attached to the ceiling of his hospital room so he would point out details to the builders.

Harrah is really into the details, and he and Leno shared an intense yet fascinatingly in-depth conversation about of such things as the spring rates of the supercharger pop-off valves that Harrah and hot-rod builder Tim Spinks devised for Thor’s powertrain.

But let’s not jump ahead. Before there was a Thor, there were those two  massive, 852-cubic-inch, 12-cylinder Detroit Diesel marine engines that Harrah bought and then decided to use to power his American trucker’s dream machine.

Harrah sketched out the powertrain design, positioning the engines nose-to-nose and sharing a common and custom-produced crankshaft, topping the engines with a dozen superchargers clustered around nitrous bottles that inject propane into the fuel system to help boost horsepower to 3,900, enough to propel the 30,000-pound big-rig up to 130 miles per hour.

Although people who saw his sketch said it wouldn’t work, Harrah first constructed a wooden mockup jig just to prove that it would. And it did.

Getting things in motion isn’t the problem, Harrah said, but stopping the 15-ton truck can be. Thus, Thor’s four, rear-mounted drag-racing parachutes, just in case.

The front end of Thor is built atop a bus chassis and the rear is based around a Peterbilt semi.  The cabin is from a 1979 Peterbilt 359, but it was stretched into a four-seat, club-cab configuration. Behind the four seats are the vehicle’s electronics, powered by the Garrett jet engine and including a slide-out 4,000-watt audio system.

Inside the cabin is a rear-mounted big-screen television, with additional screens on the back of the front seats as well, and across the windshield header four more screens for the big truck’s front- and rear-facing cameras.

The front-facing cameras that show what’s ahead of Thor’s grille –  designed as a tribute to that of a 1933 Ford – are needed because even at 6-foot-6, Harrah says he can’t really see over the superchargers.

Thor has dual fuel tanks, one for the diesel engines and the other for the Garrett jet engine. The truck has a range of 150 miles before the diesel tank needs to be replenished, a process that can take a while, Harrah said, because of all the other truckers coming over to take a closer look at his vehicle. 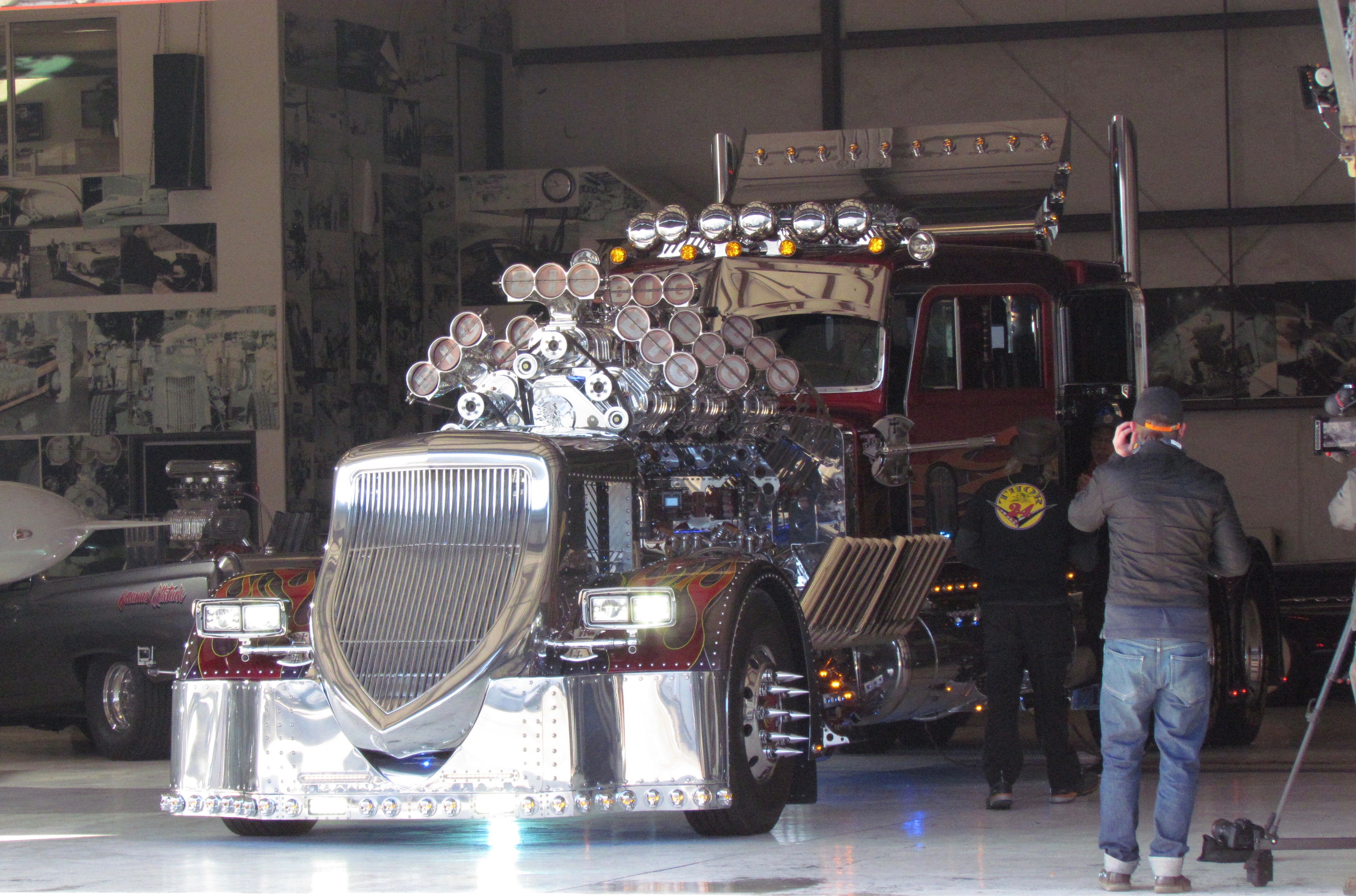 “The workmanship and engineering are unbelievable,” Leno confirmed.

Although Harrah points out that Thor is “its own car show,” the big truck has a fifth-wheeler hitch and has been used to pull a trailer carrying Harrah’s dragster to the strip.

“It’s just like a Kia,” Harrah laughed as he tried to put Thor into some sort of perspective, “only different.”

Question of the Day: What is your favorite Acura from the 1990s?