As with just about every successful automaker these days, Lexus has grabbed a hunk of the compact crossover-utility-vehicle segment, although with a cushy upscale spin befitting Toyota’s vaunted luxury brand.

Lexus actually has two small crossovers, the compact NX that’s like a slightly shrunken version of the mainstay RX, and the new UX, which is smaller still and marketed as an “urban explorer.”  So I’d say the NX could be called a “suburban explorer.”

What sets the NX apart in the enormously popular and highly competitive compact SUV market is its luxurious interior and features. That, and the Lexus reputation for reliability and superior build quality.  Lexus can do no wrong, in the eyes of its many repeat customers, and expectation runs high for NX to continue that reputation.

The gas/electric hybrid version, NX 300h, adds another layer of goodness to the mix.  Toyota is the undisputed world champion of hybrid vehicles, from the zillion or so Prius models you see running around every day to the nearly 1,000-horsepower GR Super Sport hypercar being prepared by the Toyota Gazoo Racing division, modeled after its Le Mans race car.

Of course, there are quite a few hybrid Toyota and Lexus cars, SUVs and CUVs in between.  NX 300h is the latest to have the advanced technology that boosts fuel economy, and with just a modest increase in the retail price compared with the regular gas versions.

I drove an NX 300h for several days during the hectic Monterey Car Week last month, and its relaxed and welcoming demeanor was a definite plus while running from place to place around the Monterey Peninsula. 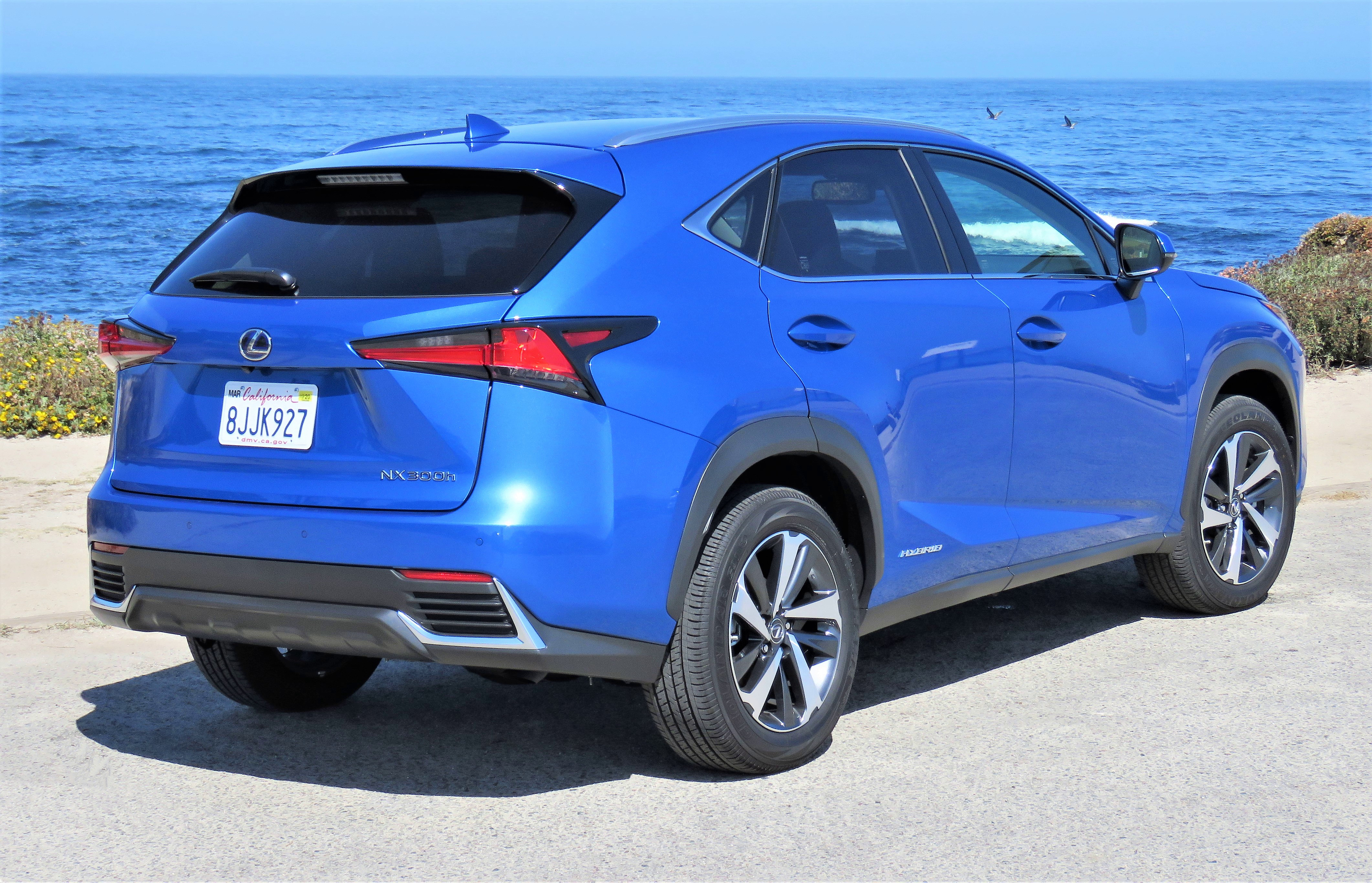 I could see how someone could grow accustomed to this ultra-comfortable interior with its plethora of features, including an awesome audio system.  Gas mileage was great, too, even when stuck in Car Week’s notorious traffic jams.

The NX also was small enough to take advantage of that rarity of rarities, a tight but legal parking spot in Carmel during its popular Concours on the Avenue.

The Lexus drove comfortably, too, with a cushioned ride that favors soft absorption over taut handling.  So while the NX styling gives the impression of sporty performance, its drivability is anything but.

It corners well enough and feels generally balanced, but there’s scant feedback when driving, and the suspension can seem downright mushy on a winding road.  Still, Lexus knows its market well and understands that its typical customers crave comfort over sport. 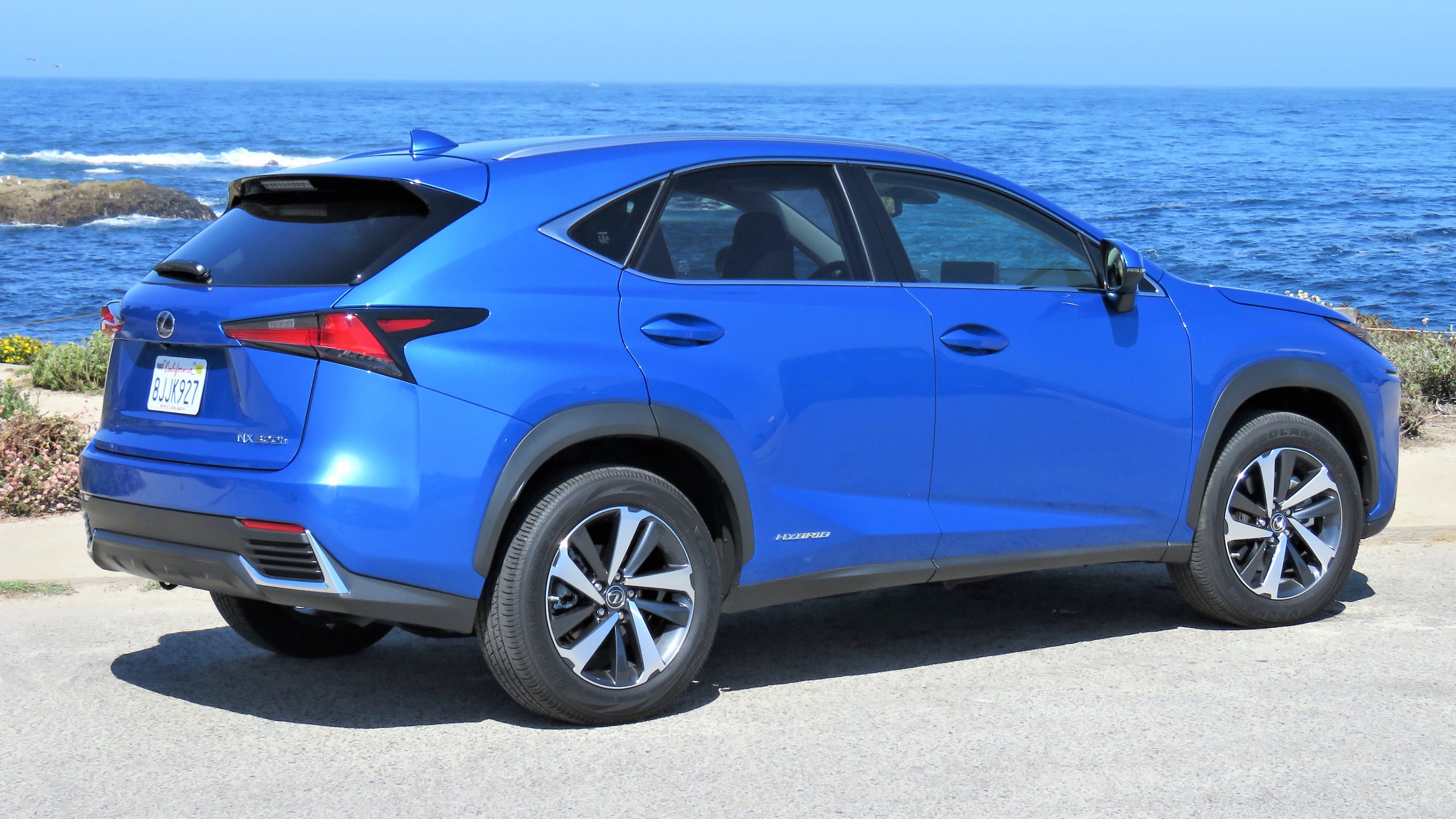 The NX 300h is also a heavy vehicle – bells and whistles add weight – which somewhat dulls the driving experience.  Acceleration suffers to some degree, particularly in this thrifty hybrid model.

But the CUV fulfills its mission as a compact yet highly comfortable and competent vehicle for couples or small families, one that’s not terrifically expensive for a premium vehicle and which offers a high degree of practicality while gently sipping gas.

If you want more performance with less frugality, go for the top NX 300 F-Sport powered by the model’s standard 235-horsepower turbocharged 2.0-liter 4 but with the sharpened drivability of the Lexus performance tweaks.

The interior of the NX 300h is thoughtfully designed, with a dashboard fitted with an array of buttons and knobs for direct tuning of the radio, adjusting the climate control and such, with a large video screen for display and other functions.  When you want to dig deeper into the computer display, the main access is via a large touchpad mounted in the center console.

With a raised wrist rest, the touchpad is convenient to use. But it’s difficult to accurately manipulate while you’re on the go.  It’s too easy for your finger to get jostled when you’re attempting to zero in on some computerized function.  It also takes attention away from driving when poking or sliding across the pad.

Now, I’m not much of a touchpad guy in general even on my laptop, preferring to use the keyboard and mouse combination.  But even if I were more attuned to touchpads, I doubt if I’d like using this one.  It’s too fiddly and hard to manage.

Maybe over time, I’d get used to it, but that’s not how it should be.  For infotainment access, I prefer the rotating knob-and-buttons setup that you see more often in premium vehicles.

The cabin of the NX is a nice place to be, with a good amount of passenger space, although there’s not much room for luggage or cargo behind the back seat.  That opens up with the seat folded, but it’s still not abundant.

The base price of the NX 300h at $38,835, not cheap but reasonable for the high level of content and comfort, as well as the hybrid drivetrain and standard all-wheel drive.  That’s less than $1,000 more than the base AWD gas model, which you should quickly recoup in comparable fuel savings.