Driven: The plug-in that you can recharge without plugging in

Of all the car companies you might see represented along your local Dealership Row, Mitsubishi might be the one you’d be least likely to miss should it disappear.

What, you might wonder, has Mitsubishi done since it discontinued offering one of the most exciting yet reasonably priced cars on the planet, the Evo, a road-legal rally car.

As it turns out, Mitsubishi has done some very cool things, and I recently spent more than a week in one of them. Mitsubishi notes that its 2019 Outlander PHEV is the world’s best-selling plug-in hybrid, and after driving one from Las Vegas to Monterey Car Week and back, I can see why.

Like other Outlanders, the PHEV version is a roomy crossover utility vehicle, in the case of the PHEV with seating for five and gobs of cargo room behind that second row.

The battery pack provides as much as 22 miles of range, likely enough for most people’s daily commute. With the standard DC Fast Charging setup, the battery pack can be recharged to 80 percent capacity in 25 minutes, which means when traveling, you can stop, use the rest room, enjoy a cup of coffee and a snack, and be back on the road in less than half an hour. 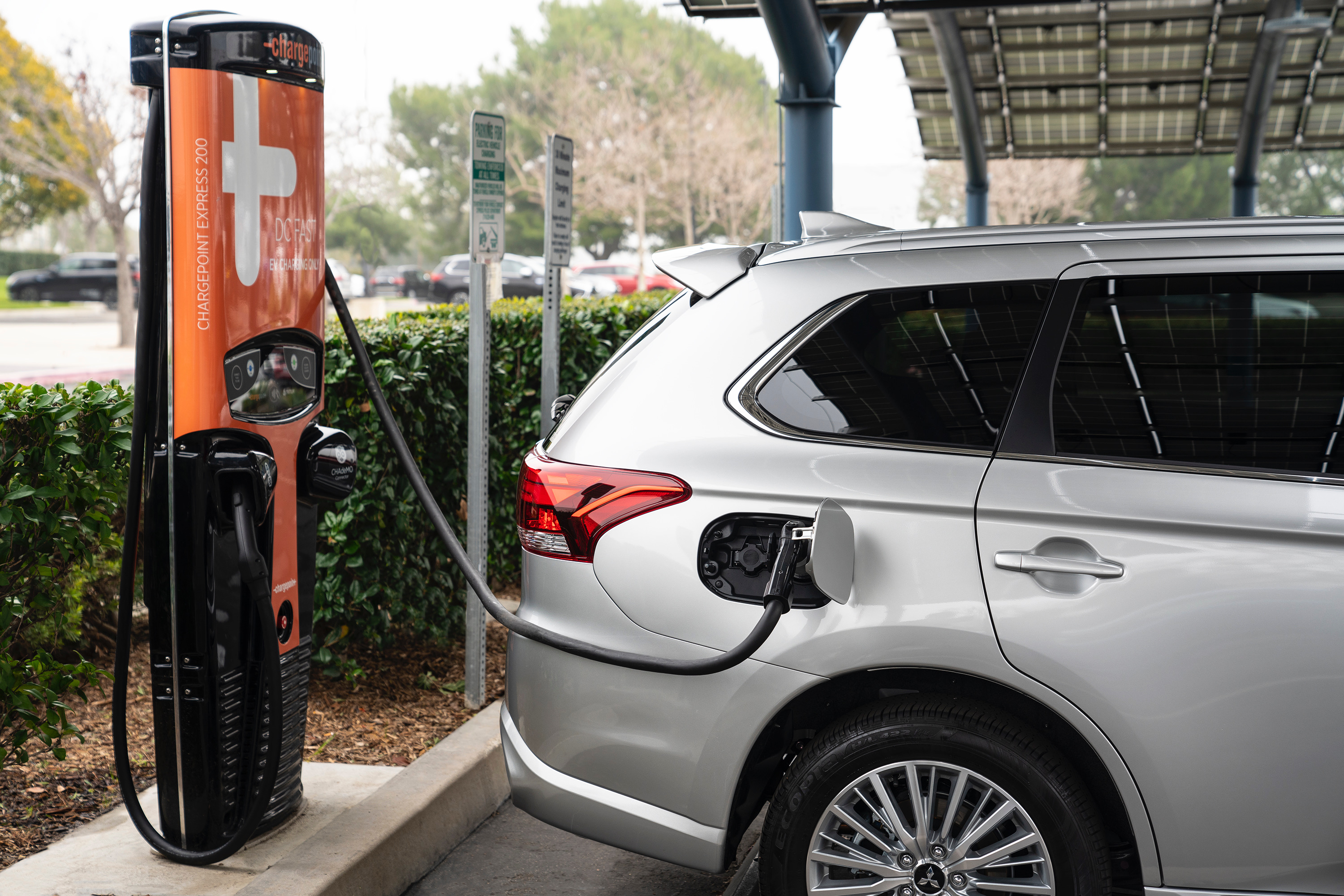 But, get this: You don’t have to plug in to recharge the battery pack because there’s a 2.0-liter 4-cylinder gasoline engine under the car’s hood.  Not only can it propel the car around 300 miles between fill ups, there’s a button on the center console you can press so the engine recharges the battery pack at the same time.

There’s also a switch to run on electricity only and another to switch from front to all-wheel drive.

While I did most of my recent Monterey trip on petroleum fuel, averaging better than 31 mpg in the process, it was nice to be able to run quietly through urban streets and in residential districts. When in recharging mode, the 4-banger can be noisy, but at the same time you can enjoy seeing the available EV-mode mileage numbers growing on the dash display.

Whether running on gasoline or electricity, the Outlander is a very capable and comfortable vehicle. Bob Golfen was along for the Monterey trip, and the CUV easily handled our luggage and other gear, including a folding table and an office-style desk chair that was much more comfortable than those provided in the typical motel room.

The Outlander PHEV comes with a long list of standard features, including blind-spot warning, lane-change assist and rear cross-traffic alert (which saved my bacon and the rear bumper at least once on the trip).

The vehicle also comes with a 5-year/60,000-mile warranty and a 10-year/100,000-mile guarantee on the PHEV components, and those protections can be transferred to a second owner.

As much as Bob and I enjoyed our drive, there were two nits that we’d pick.

One is a lack of USB outlets. We could find only one (there also is the usual cigarette-lighter style plug in) and I hogged that one because our test version didn’t come with a navigation system.

Based on my recent drives of various test cars, it appears that factory-installed GPS is going away, being replaced by Apple CarPlay and Android Auto. But an 11-day loan wasn’t long enough for me to get used to the fact that to have GPS I had to keep my smartphone tethered to the dashboard.

Too many times I parked the car and walked away, only to realize my phone was still in the car. On the other hand, it’s nice not to have to pay the markup on a factory-installed GPS system. The Apple CarPlay worked wonderfully, and took us on some wonderful two-lane short cuts that factory-installed GPS systems in cars used in previous years for the same trip didn’t know existed.

For the record, new for the 2019 model year on the Outlander PHEV is a new front grille, headlamps and front and rear lower facia, new 18-inch alloy wheels, new rear spoiler, new instrument panel and front seat designs, standard rear air vents and a rear USB port (which we finally found but it was too far away to help us in the power-adjustable front seats), improved suspension and noise/vibration/harshness control.

And all of that for a base price of $35,795. Options included on our test version were Pearl White paint, a towing package (up to 1,500 pounds of trailer), a cargo net package, floor mats and wheel locks.

Would I have preferred more power and quieter operation from the gasoline engine? Sure, though even on the power-sapping Baker Grade, 4-cylinder run just fine, even with the huge/world’s tallest thermometer in nearby Baker, California, showing 109 degrees.

And, I have to admit, after our Monterey trip, I’m hoping that Mitsubishi has a long corporate life and continues to produce such vehicles, though I might make two suggestions: How about offering the PHEV in a midsize pickup truck platform and please, please bring back the Evo. 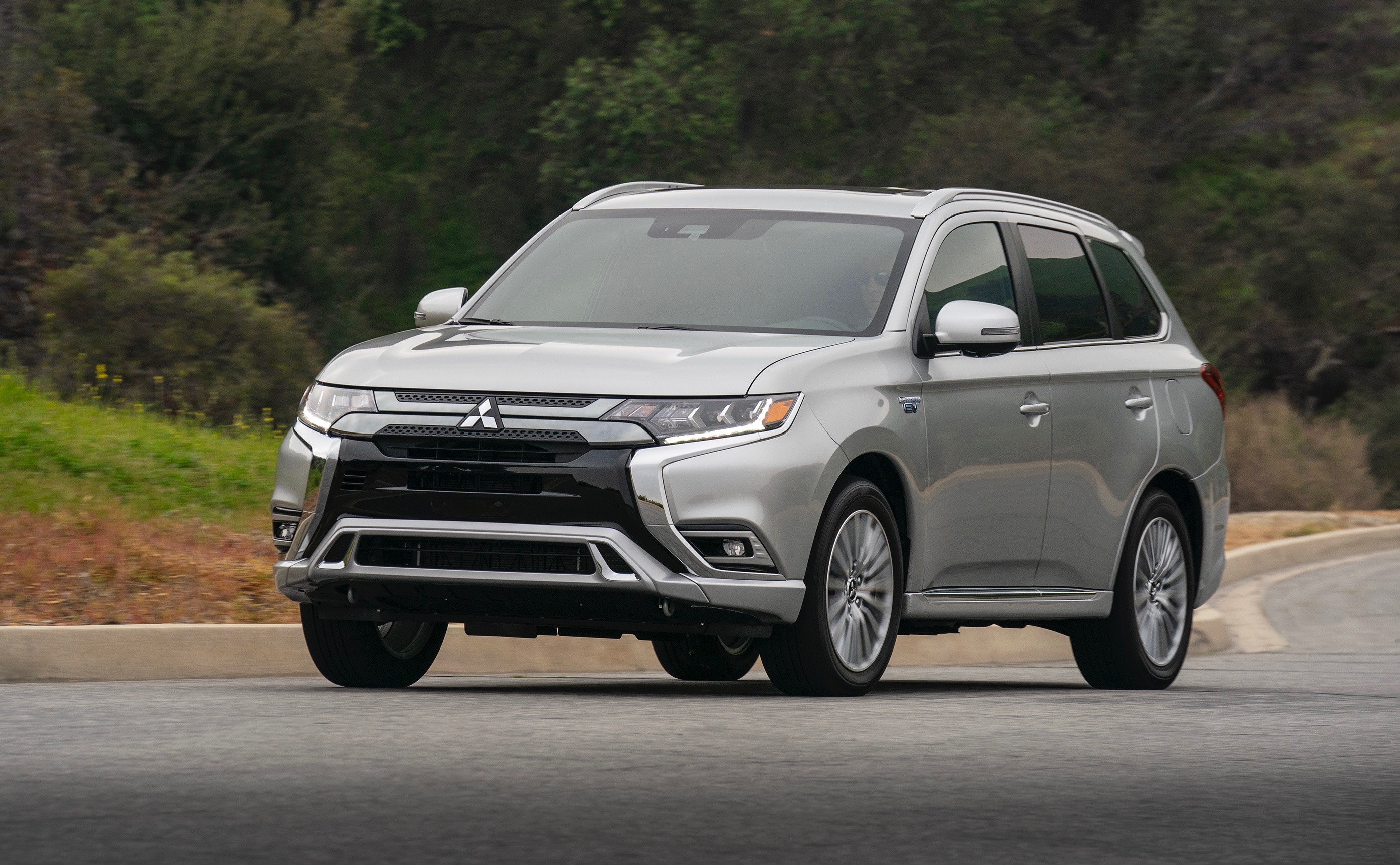