The first in a three-day parade of around 600 vehicles started crossing the block Thursday morning at Mecum Auctions’ annual Monterey sale taking place on the Del Monte Golf Course just behind the Hyatt Regency Monterey hotel.

In addition to the bidding on the block, Mecum is staging at the same time a Mecum On Time online-only auction featuring the Dick Barbour Tether Car Collection and A Collection of Ferrari Literature and Accessories.

But even before any of the bidding began, some cars were being sold under a separate open-sided tent where the Blackhawk Exposition Sale at Mecum Monterey offered for sale 18 collector cars from the famed Blackhawk Collection.

Well, the Blackhawk sale started with 18 vehicles, but when we stopped by on our way to the main auction tent, two of the 18 Blackhawk cars — a vintage Cord and a sleek and low-slung Aston Martin — already had been sold.

In that big main tent, everything from Pintos to Packards to Porsches will be paraded past the bidders and on across the auction block by the time the last gavel pounds “Sold!” sometime on Saturday.

While it is a cliché to say that any auction offers something for every taste, that phrase does seem to apply to Mecum’s Monterey auction. So ignoring the cars crossing the block on Thursday (sorry, but I need time to write this story and to get it edited and posted), here are some of the cars that captured my attention when I visited the venue: 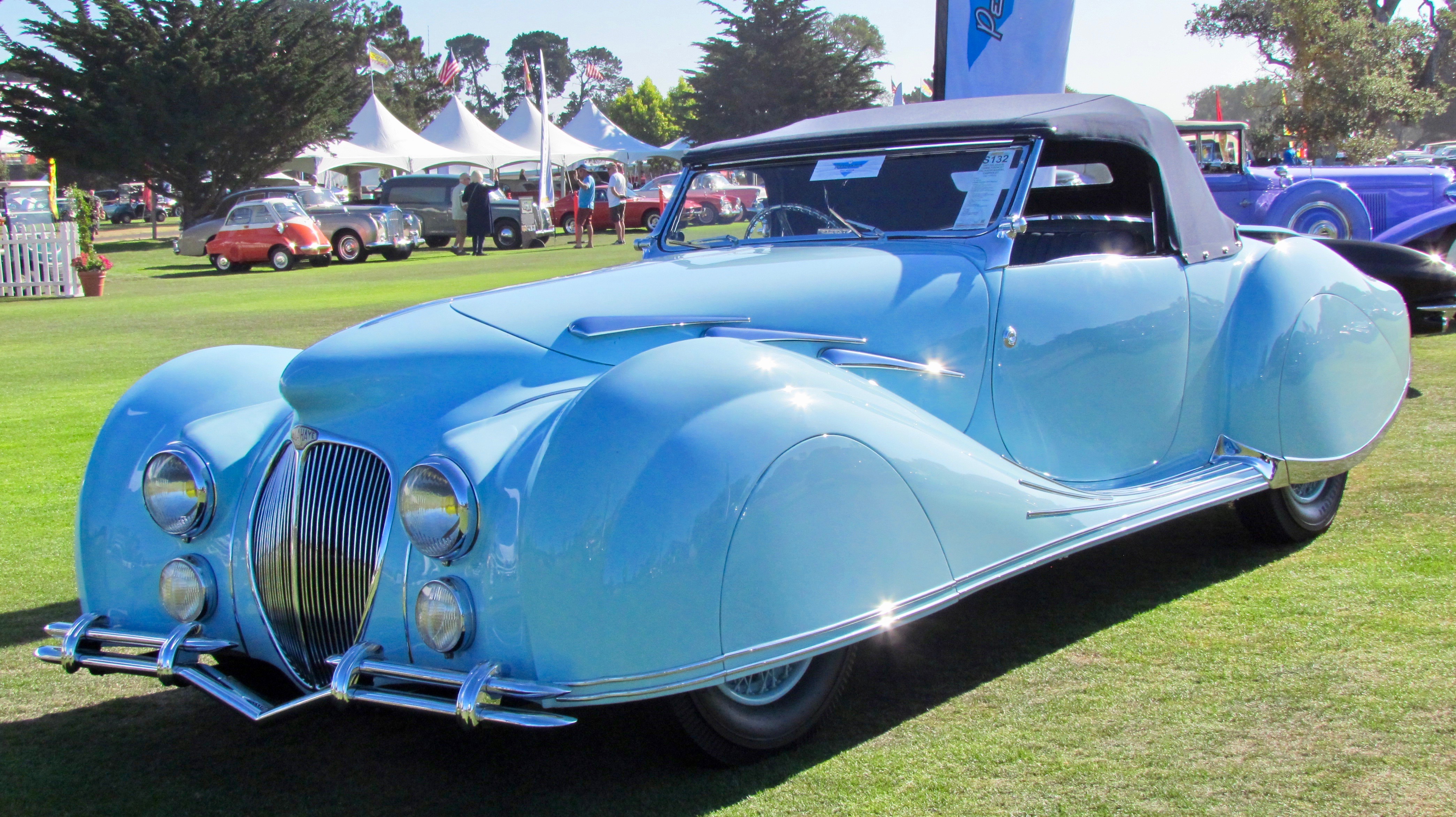 You had me at hello. This is the first car you see as you enter from the parking lots onto the golf course where the auction cars await their turns across the block. The car takes its nautical and French name from its narwhal-style nose. This is one of seven Narvals produced, was owned by French singer-songwriter Charles Trenet and is being offered after 50 years in a collection. To describe it as stunning would be an understatement. 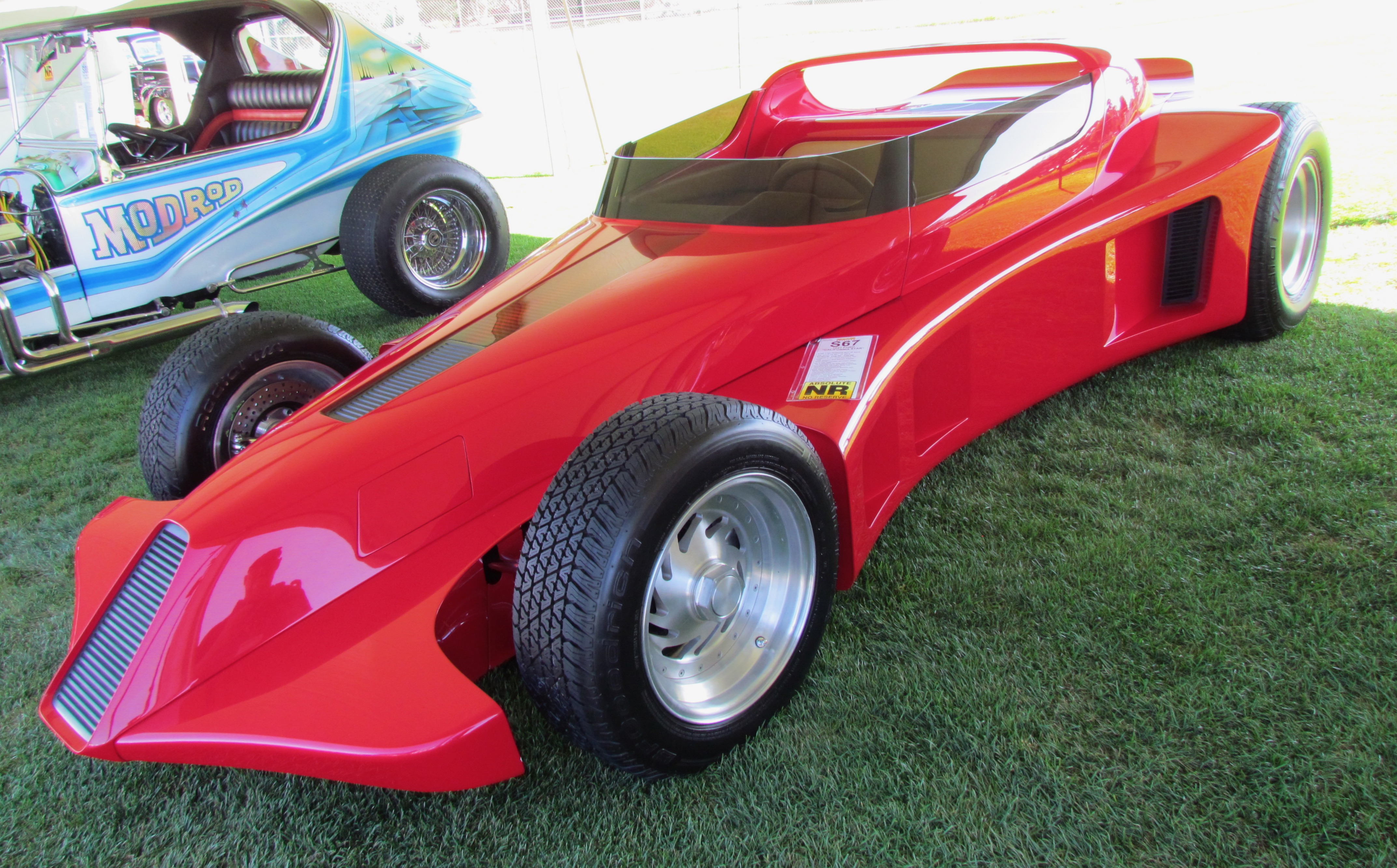 The auction docket includes 11 cars from the late Blackie Gejeian’s hot-rod collection. Many of his cars won American’s Most Beautiful Roadster honors, among them my choice, this “California Star,” designed by Don Verner and built by Ron Covell and the AMBR winner in 1984. The car was among the first mid-engine street rods, has aluminum bodywork, Connolly leather interior and a turbocharged Chevrolet engine. 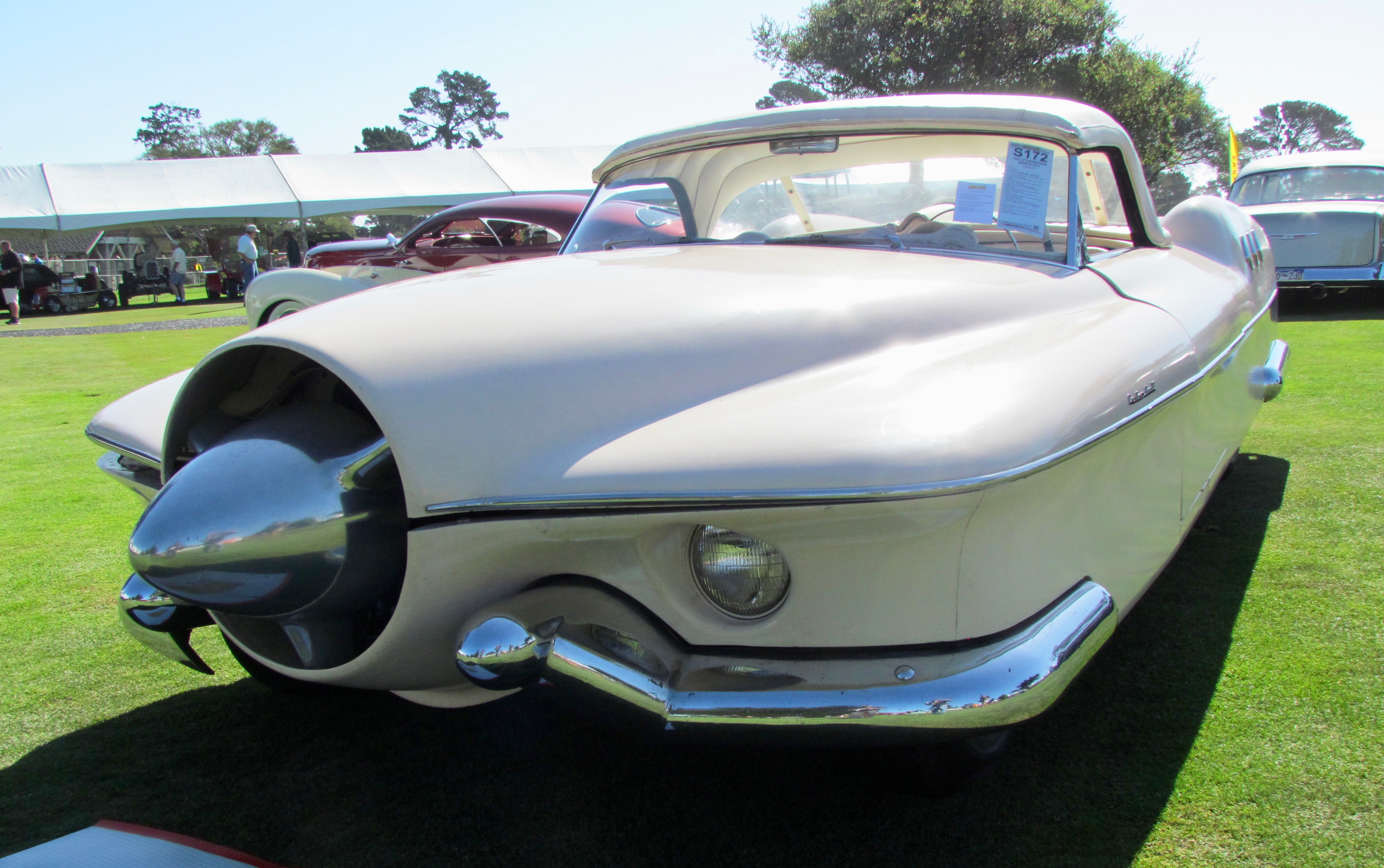 Builders Glen Hire and Vernon Antione reportedly were inspired by General Motors’ 1951 LeSabre concept car for the creation of this unusual-looking vehicle. The chassis came from a ’51 Studebaker, the body comprises 14 molded-fiberglass sections, the triple taillamps are 1952 Lincoln units, and the car originally had a 232cid Studebaker engine but now carries a Cadillac V8. 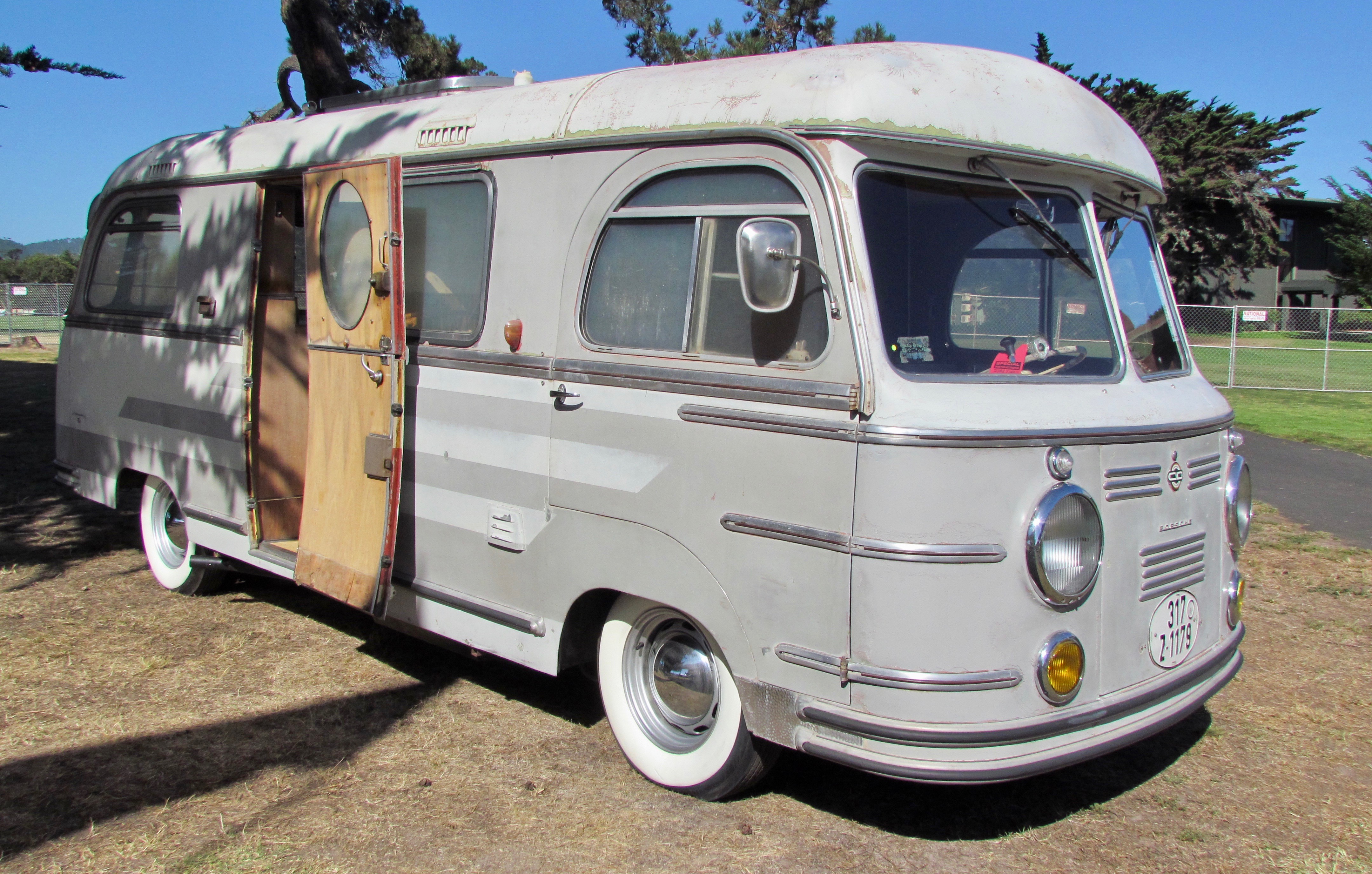 Mikafa, a German company, reportedly produced camping vehicles from the 1920s until well into the 1970s, and a few as three of its Sport models seem to have been produced around Porsche engines with Porsche badging on the vehicle exteriors (Tempo was one of the chassis on which Mikafa built its campers). Believed to be one of only two Mikafa campers in the U.S., this one originally had an engine from a 356 but currently carries a later boxer 4-cylinder. The aluminum-bodied and front-driven camper is in original condition and likely needs restoration. One interesting aspect is four-abreast seating with jump-style seats on either side of the front bench, which means a child may well have ridden to the driver’s left as a family hit the road. 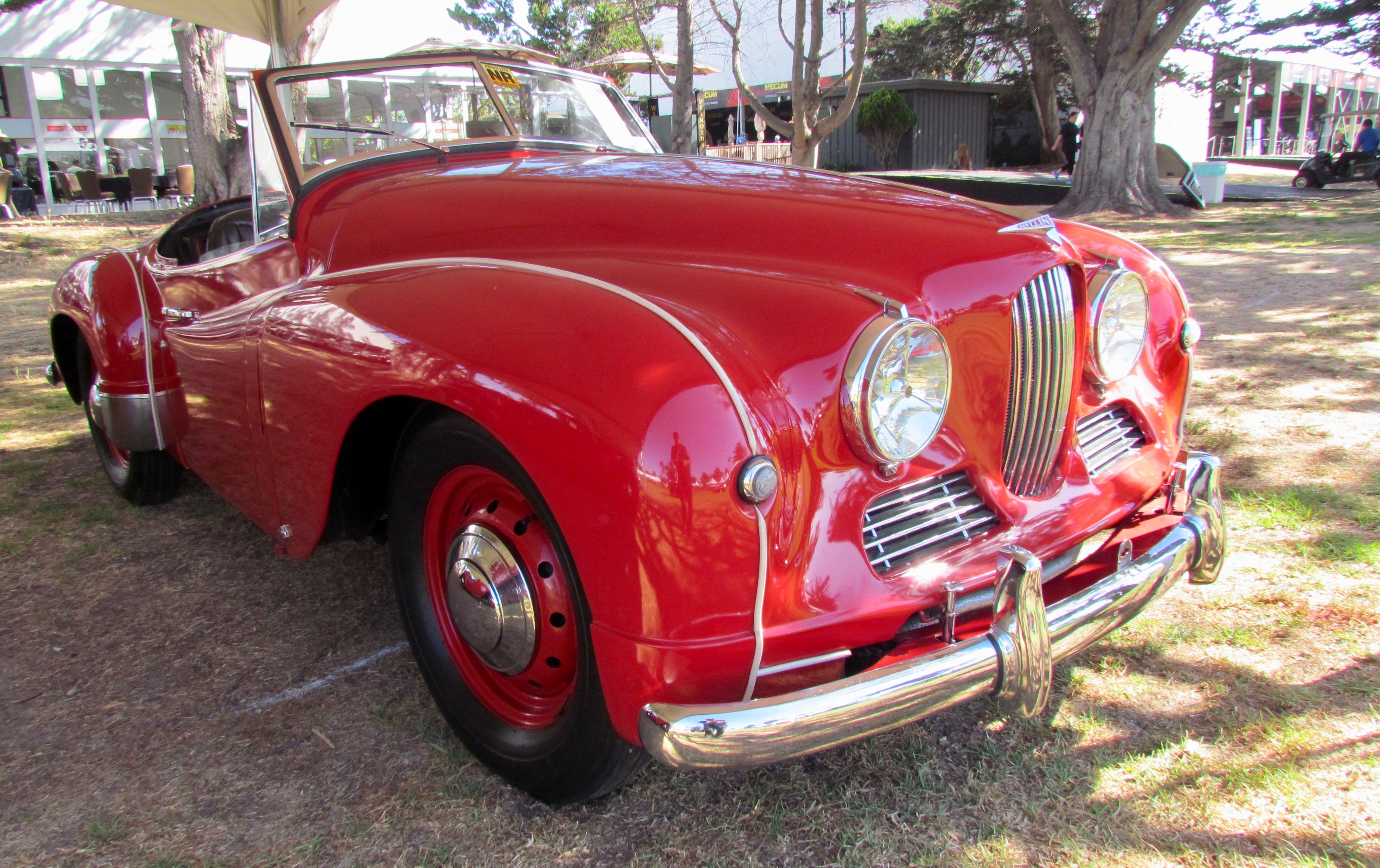 I love the swoopy fender forms on this British sports car, which reportedly was purchased in 1975 by restorer Reg Gilbert and was restored in the 1980s as documented by the Jowett Club Newsletter. The aluminum-bodied car has a 1.5-liter 4-cylinder engine and 4-speed manual gearbox. 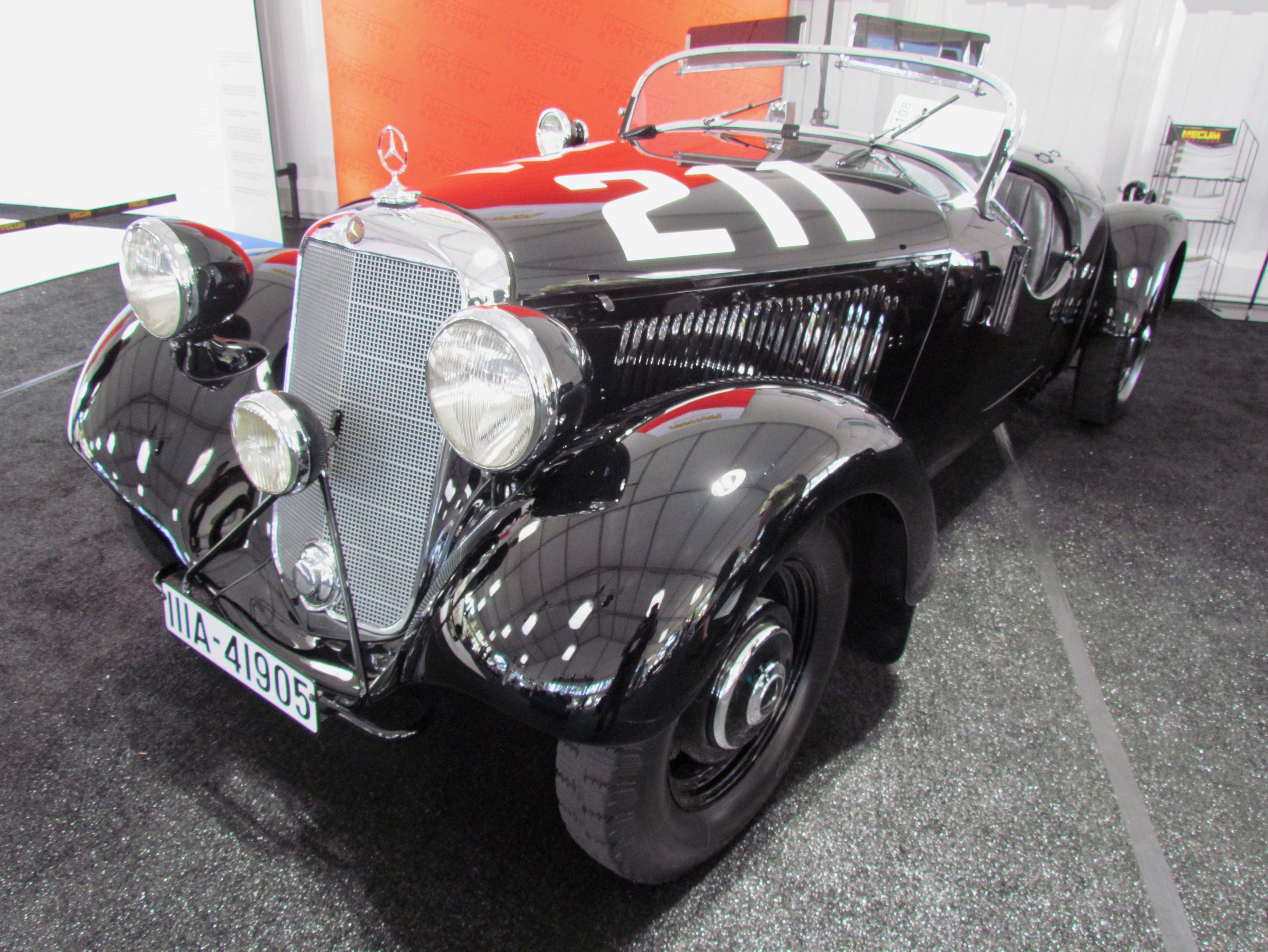 Here’s another sports car with wonderful lines, albeit in a much higher price class. This is believed to be the first of the 10 Alpine Racers produced and the only one in Gloss Black. The car was re-discovered by a doctor from New York while doing humanitarian work in Germany in 1950 and was brought to the U.S. and given to the doctor’s son. Warren Riter acquired the car in 1990 and did a concours-quality restoration with Horsepower Motorworks of Victor, New York. Again, this car has aluminum coachwork, but also some panels made from even lighter-weight magnesium. 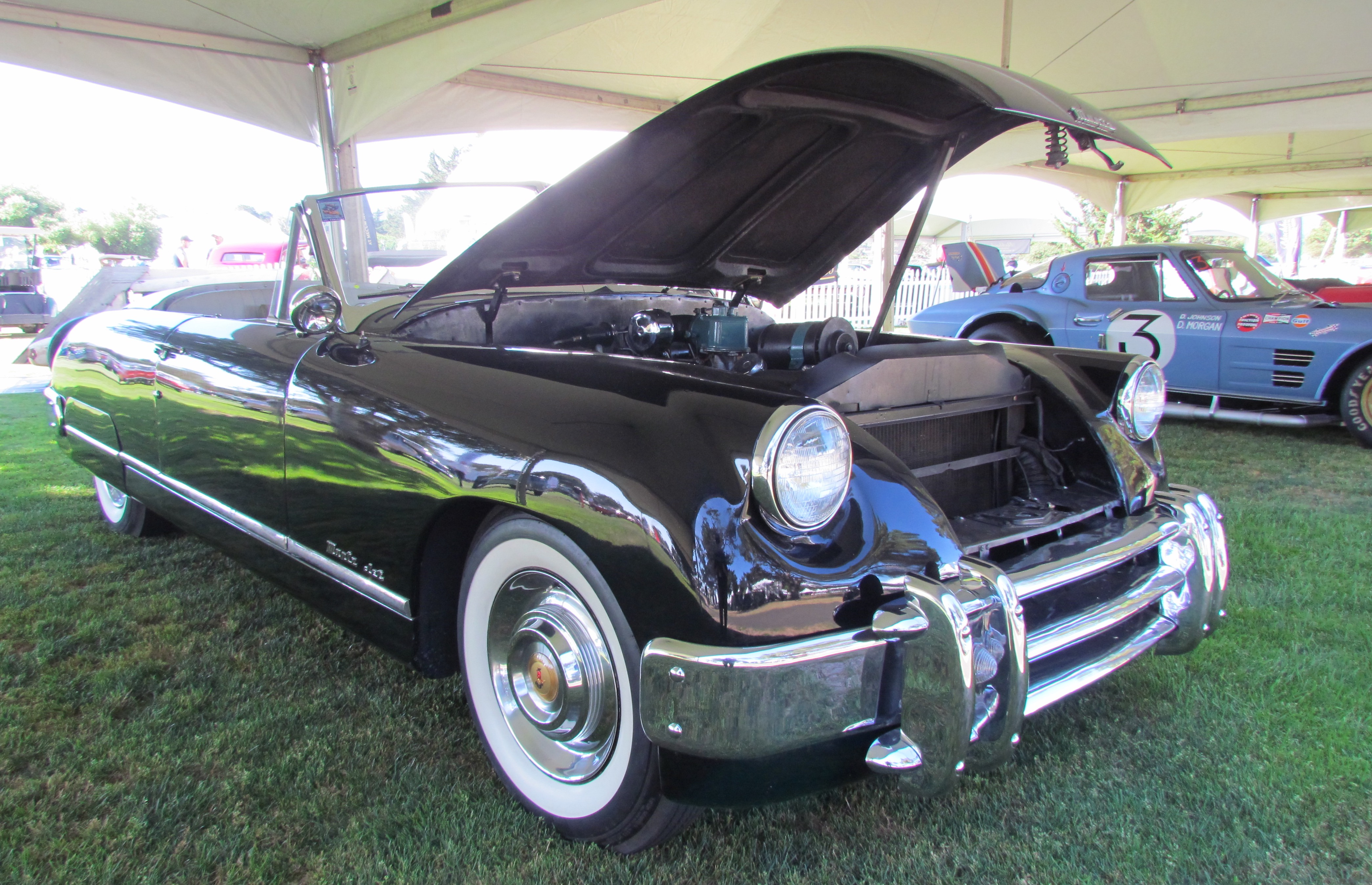 Mickey Rooney and Lash LaRue (remember him, the cowboy star with the whip?) were among those who owned Muntz Jets. Earl “Madman” Muntz became well known for selling television sets and other early consumer electronics, and at one point claimed to be the world largest car dealer. He also produced a series of aluminum-bodied sports cars based on a design by race-car builder Frank Kurtis. This one carries a 337cid Lincoln V8 linked to a GM automatic transmission. 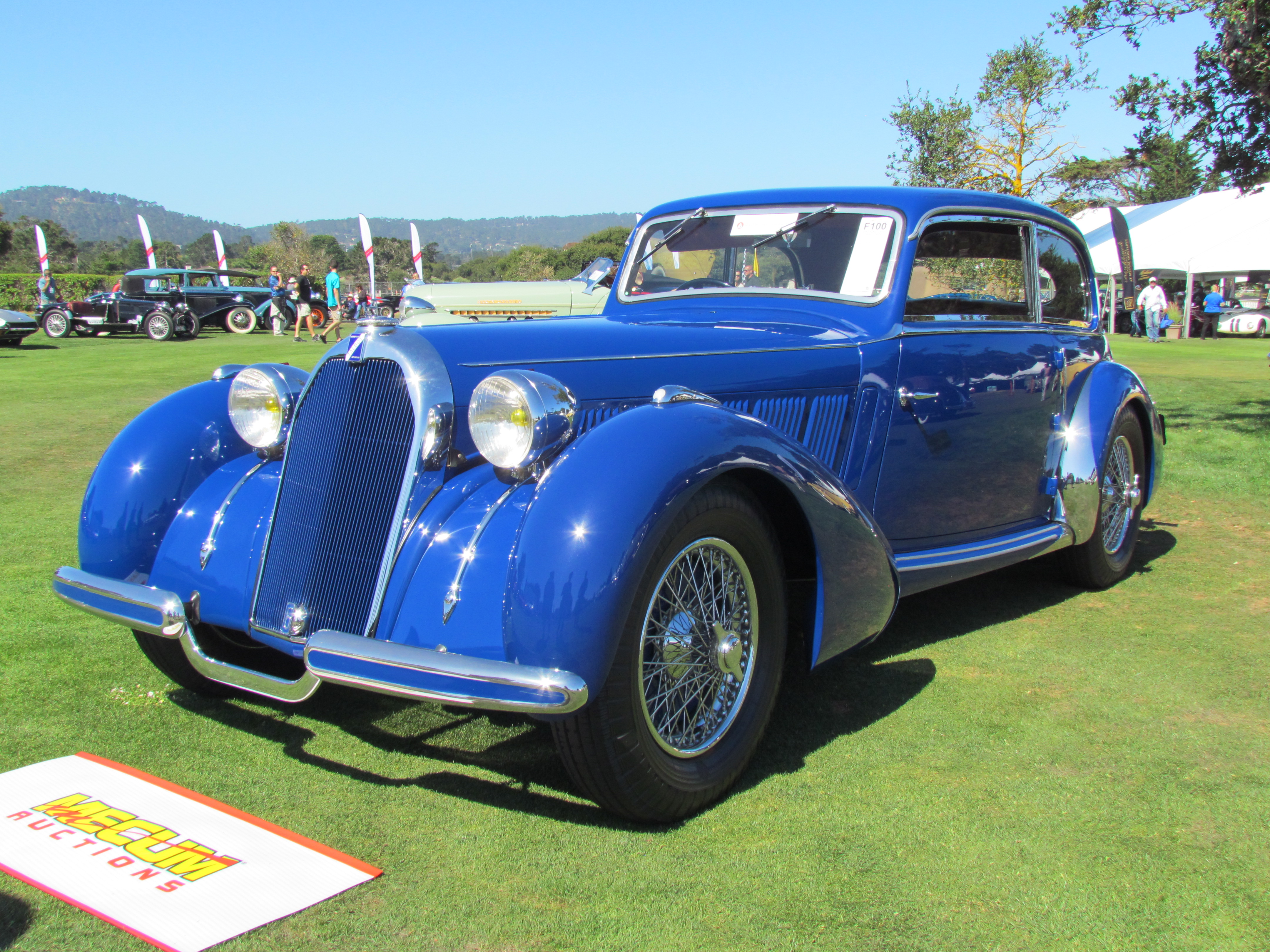 The Academy of Art University, an art and automotive design school based in San Francisco, is in the process of refining its extensive and well-respected car collection with plans to opening it as a public museum. In the process, it is selling some of its vintage vehicles and a few dozen of them are crossing the block at Mecum Monterey. If I’m picking just one, I suppose I could be satisfied with this 1939 Talbot-Lago T150-C coupe.