If you were paying attention back in 1969, you were among those stunned not only by the appearance but by the performance of the Mercedes-Benz C 111. The Wankel-powered, wedge-shaped, plastic-bodied experimental vehicle hit 62 mph in 5 seconds on its way to a top speed of 161.5 mph.

The car was the first of a series of C 111s that would inspire vehicle design and technology around the globe.

The 50th anniversary of that first C 111 will be celebrated April 10-14 when Mercedes-Benz sets up shop at the 30th annual Techno Classica show in Essen, Germany. Not only will all of the C 111 variants be on display, but so will the 1903 40 PS Mercedes-Simplex and the company’s latest experimental vehicle, the 2019 EQC.

But wait, there’s more: During the weekend, Jutta Benz will be on hand to share the story of her great-grandparents, Carl and Bertha Benz, with children attending the show.

The special vehicles in the Mercedes-Benz display include: 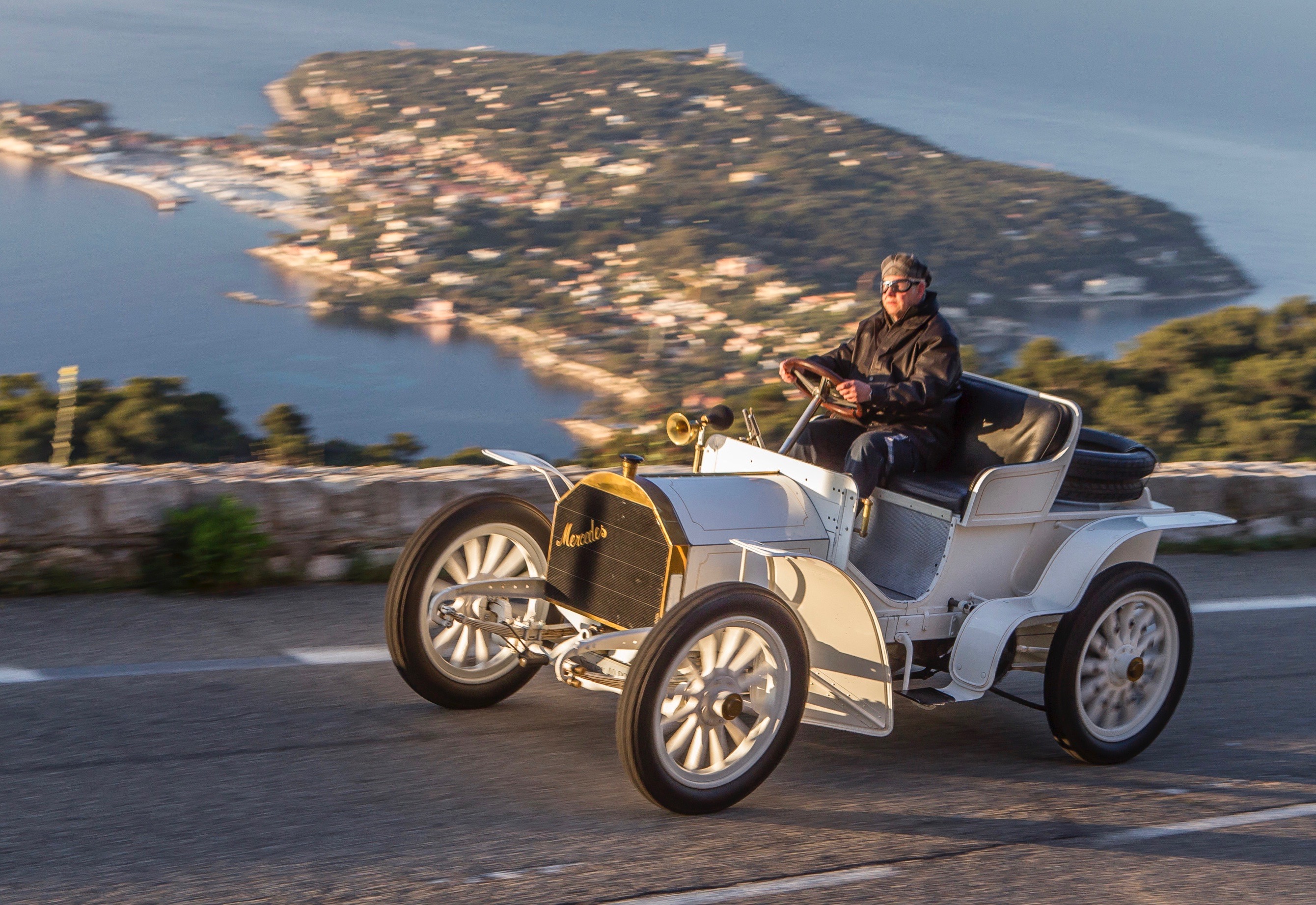 Launched in March 1902 to replace the Mercedes 35 PS, the “Simplex” add-on was intended to emphasize how easy the new high-performance model was to operate. Features included a long wheelbase, the light and powerful engine installed low and the honeycomb radiator integrated into the front end. The Mercedes 35 PS marked a departure from the horseless-carriage style that had dominated the industry. Mercedes considers the 1903 40 PS Mercedes-Simplex to be the first modern car. It continued in production through 1909, had a 6.8 liter 4-cylinder engine and a top speed of 62 mph. 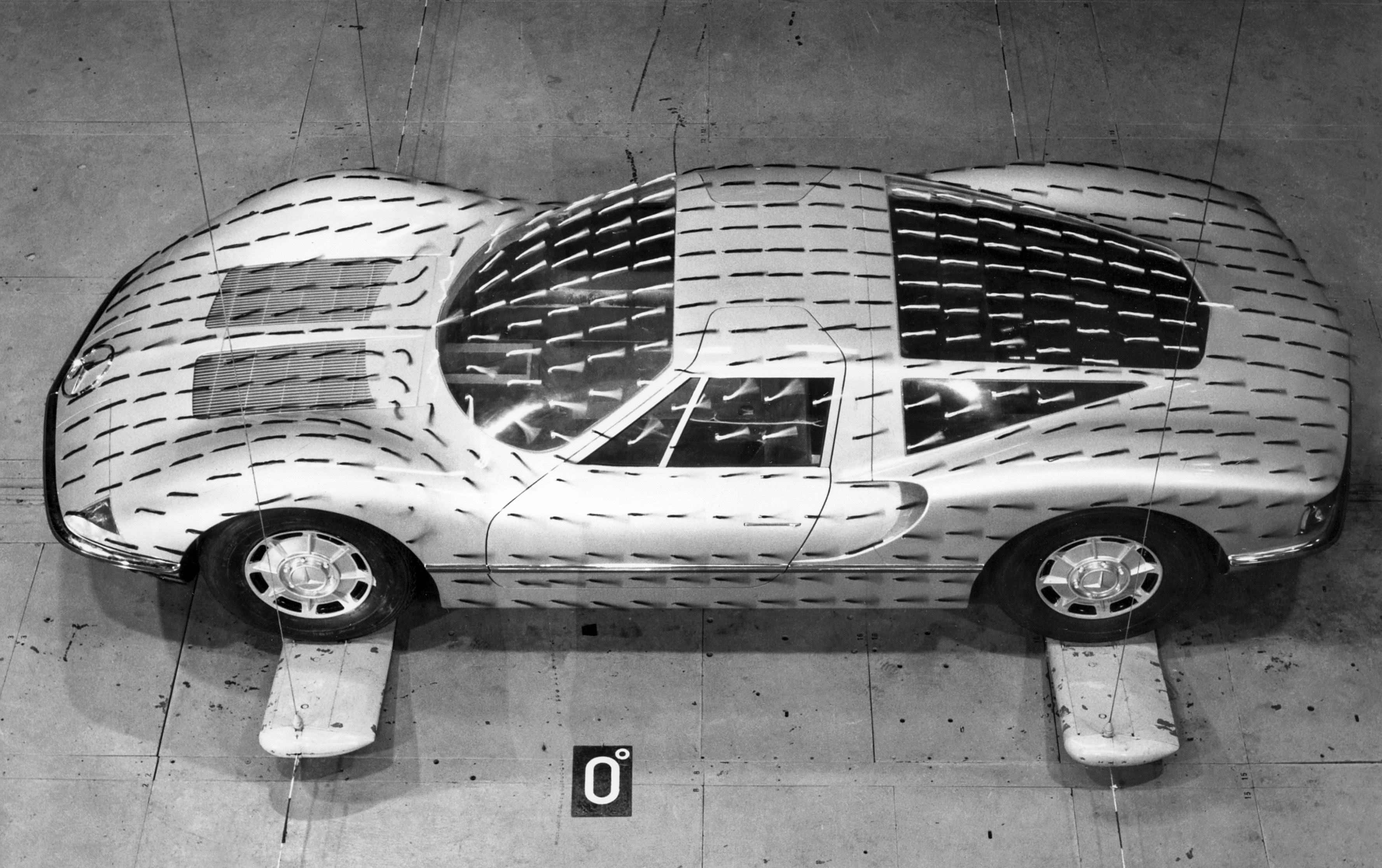 According to Mercedes-Benz, designers Giorgio Battistella and Paul Bracq worked feverishly on a mid-engine super sports car in the mid-1960s. the SLX was showcased in the spring of 1966 as a full-scale wooden model for wind-tunnel testing. “The prototype illustrated just how important the creative development step was to the C 111, which was presented only three years later,” Mercedes notes. 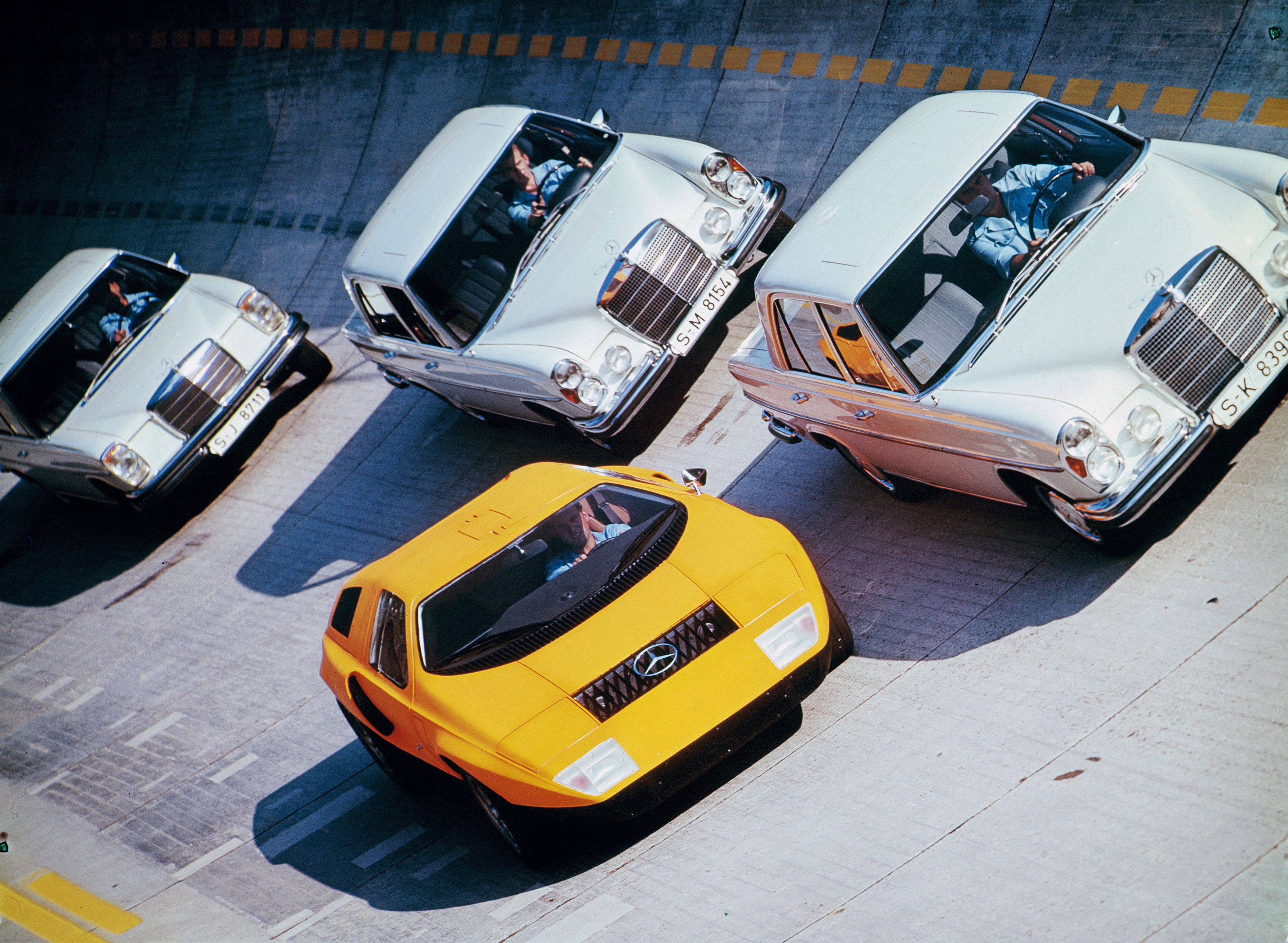 Displayed at the Frankfurt motor show in September 1969, “this ‘rolling test laboratory’ amazed visitors with its upward-opening gullwing doors, a pronounced wedge shape and an orange metallic finish,” Mercedes said. “Other innovative features included the fiberglass-reinforced plastic body and the powerful, three-rotor Wankel engine, which delivered outstanding performance.” The powerplant was mid-mounted and displaced only 1,800cc but provided 280 horsepower, good for more than 160 mph. 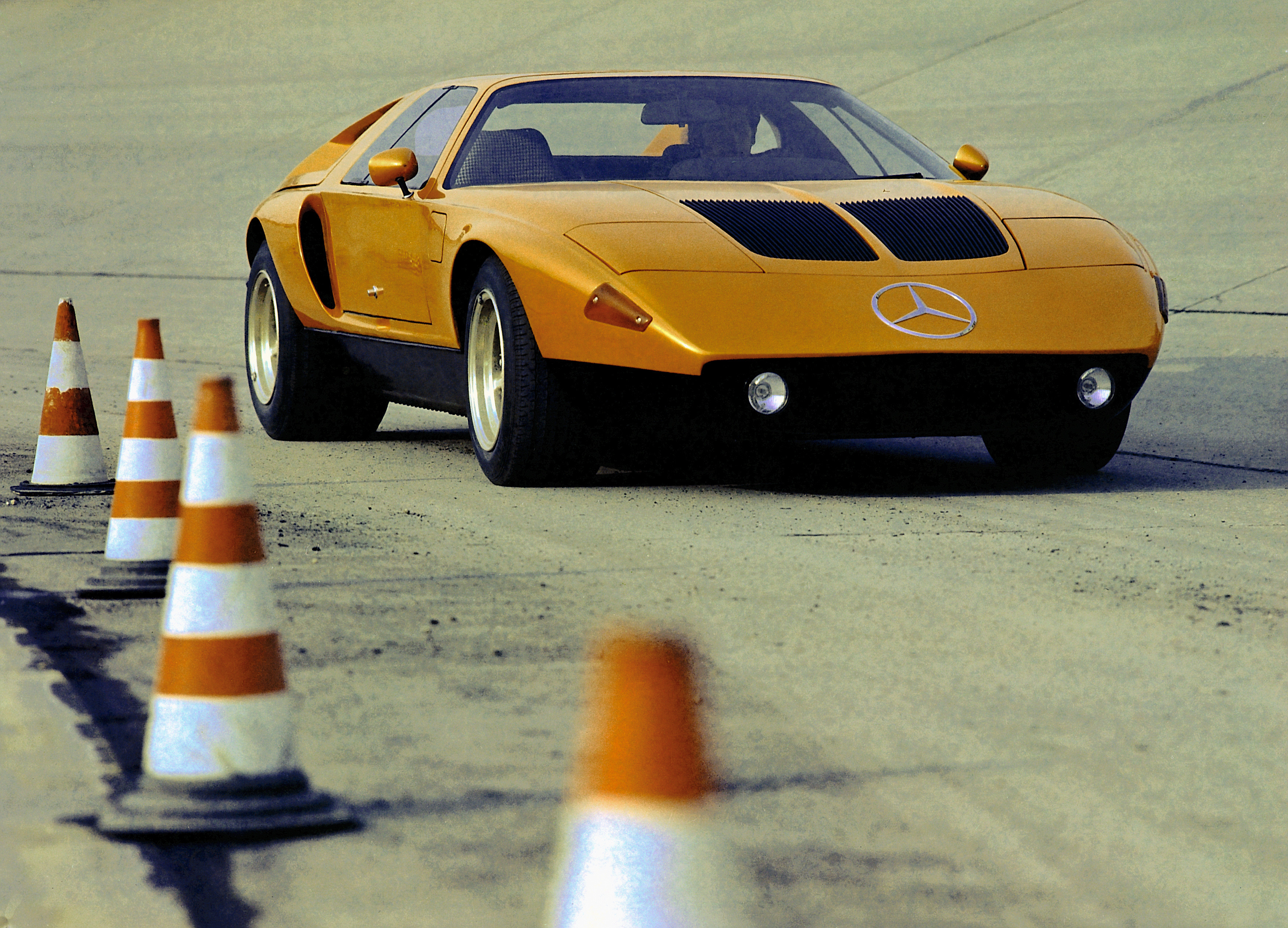 “Just six months after presenting the C 111, Mercedes-Benz once again caused a stir as a thoroughly revised version of the high-performance sports car with the Wankel engine made its debut at the Geneva Motor Show in March 1970,” the company said. “The C 111-II had even better performance thanks to its 257 kW (350 hp) four-rotor engine. With the redesigned body it was even more appealing than its predecessor and suitable for everyday use in every respect. Although numerous blank cheques arrived in Stuttgart, the C 111-II did not enter series production. Development of Wankel engines at Mercedes-Benz was also not pursued any further ─ contrary to original plans ─ and the engine range was eventually discontinued.” The C 111-II was a true supercar, achieving a top speed of 300 km/h (186 mph).

“One of the six experimental vehicles of the C 111-II variant presented in Geneva in 1970 was converted into a diesel-powered record-breaking car in 1976,” Mercedes reports. “To this end, the C 111-II was equipped with a 140 kW (190 hp) turbo-diesel engine based on the five-cylinder production engine to test the performance limits of the diesel passenger car and demonstrate its reliability. Outside mirrors and folding headlamps were dismantled for improved aerodynamics, and the handbrake was also removed. In June 1976, the C 111-II D was used on a 64-hour record-breaking drive in Nardò… The vehicle continued to set a total of 16 international records ─ and reach average speeds in excess of 250 km/h.” 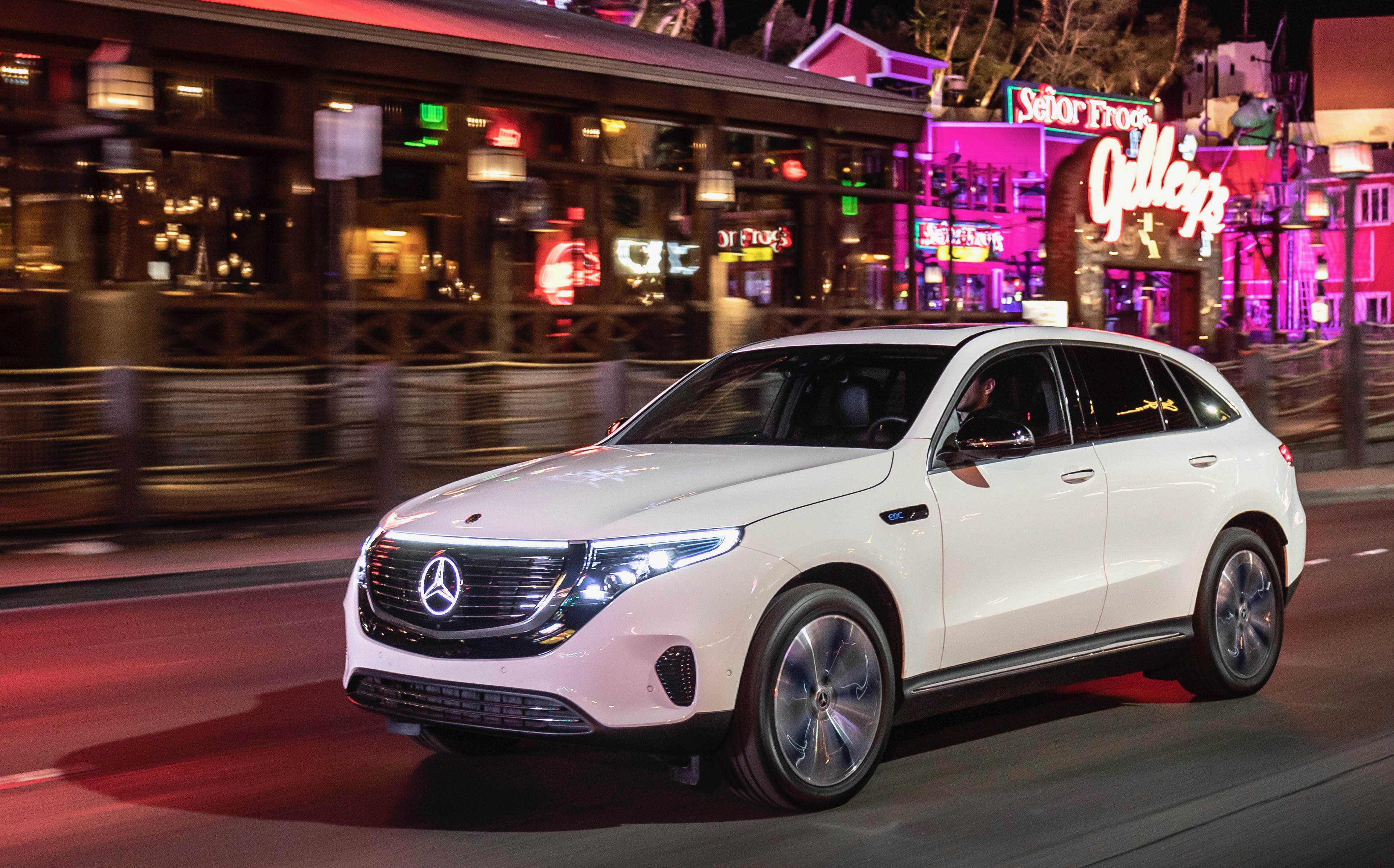 “Just as the Mercedes-Simplex was the first modern car to shape the future of the automobile more than 120 years ago, the Mercedes-Benz EQC likewise sets standards today as the first Mercedes-Benz model representing the new EQ product and technology brand,” Mercedes said. “The model symbolizes the beginning of a new era of mobility at Daimler characterized by the Mercedes-Benz initiative CASE (Connectivity, Autonomous, Shared & Services and Electric).”