There is a sensation that engulfs your being when you turn a well-balanced sports car into a left-hand corner and you sense the vehicle rotating with the driver’s seat as its axis.

Nearly 30 years after the Mazda Miata rejuvenated the genre of the classic British sports car — and, yes, we know it was and still is made not in Jolly Ol’ but in far-away Japan — we are very happy to report that sensation still comes with strapping yourself into what the specs sheet would have you believe is an underpowered collection of parts.

Consider: Four-cylinders, with no boost from turbo or supercharging. A measly 181 horsepower. A pitiful 151 pound-feet of torque.

But if you have been led to believe that in the current automotive environment you needed at least 700 horsepower and close to a thousand pound-feet to bring a smile to your face, you really need to find a way to fit yourself into a vehicle such as the 2019 Mazda MX-5 RF, which I’ve been driving for a week, and see how much fun can be had with a lot less power — and for a lot less than the nearly six figures you’ve come to think is the ante for such automotive fun.

No, the Miata is not going to carry you at autobahn speeds, but neither is it going to jeopardize your driver’s license. Forget 9/10s. Push it to even 80 percent on a curvy road and you’re having a blast and a half.

MSRP on the car I’ve been driving is $32,345. As-tested price is $38,635, in large part because this one is equipped with a special Brembo/BBS, Recaro Package, that installs Brembo brakes up front (and red calipers at all four corners), BBS forced 17-inch alloy wheels (bearing Bridgestone Potenza S001 P205/45 tires), heated Recaro Sport seats, side-sill extensions and rear bumper skirt, and a black roof.

Oh, and by the way, that roof is what Mazda calls its RF or Retractable Fastback, and which old-timey sports car enthusiasts would recognize as a Targa top, except instead of having to be manually removed and stowed, at the push of a button, the rear section lifts and the Targa section buries itself into a compartment behind the cabin, which now is open to the sky for an almost-roadster driving experience.

In some marvelous automotive architectural design and engineering, you still have nearly 4.5 cubic feet of trunk space even with the top submerged, enough for a couple of weekender bags.

When Mazda introduced the Miata back in 1989 at the Chicago Auto Show, the reborn British-style sports car was available only as a roadster, and only with a manual transmission. With the launch of the fourth generation in 2015, the retractable fastback version became available. (There had earlier been a removable hardtop option and a power retractable hardtop as well.)

The RF design has a fixed profile with features flying buttresses and the added security and sound-proofing of a solid roof overhead. The Targa-style top can be stowed or move back in place within 13 seconds, so even if you’re caught in a rain storm, you’re not going to get very wet. But you are going to enjoy an almost roadster-like driving experience.

Some of those upgrades are not included if you order the optional automatic transmission. Fortunately, our test was equipped with a six-speed manual, which continues to have wonderfully short throws so you can take advantage of all of the powertrain’s output.

For 2019 that output has been enhanced as part of an ongoing weight-saving “Gram Strategy” with lighter pistons and connecting rods, more-efficient exhaust valving, porting and camshaft, with a low-intertia dual-mass flywheel and a revised final drive ratio.

Even with some added weight from the roof structure and motors that move it, as well as new technology and safety features, the 2019 Miata remains faithful to the exciting sportiness of its predecessors. It’s a fun to drive. A blast. Carroll Shelby once told me that all any car really needed — not necessarily what the driver wanted but what really was necessary — was 170 horsepower. The 2019 Miata tops Shelby’s standard. 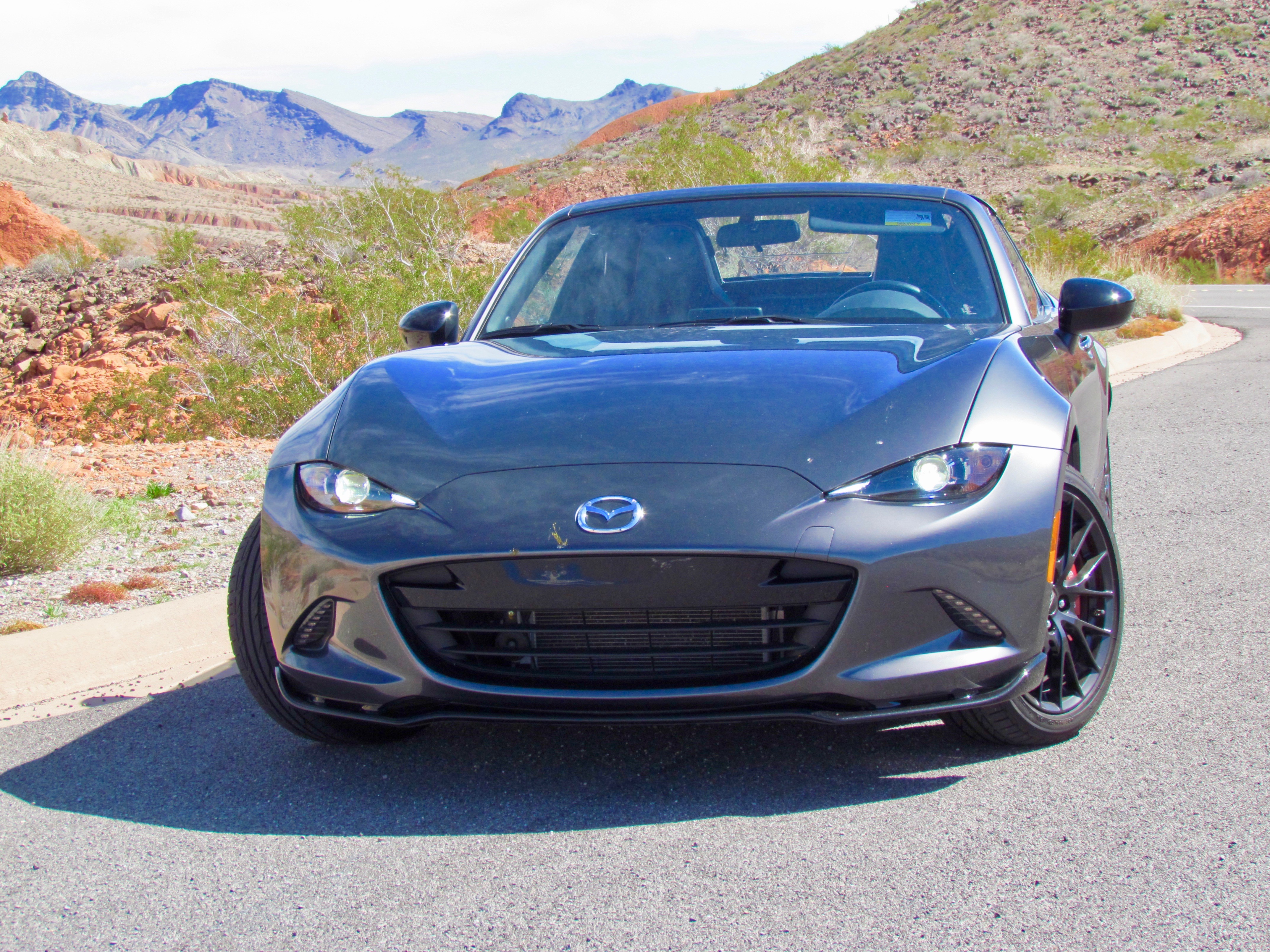 Performance is balanced, not insane. Yes, I wish my right knee wasn’t quite so close to the lower edge of the dashboard, but the tilt and telescoping steering column keeps me otherwise comfortable in the leather-covered Recaro driver’s seat, and the short-throw shifter falls immediately to hand.

The cockpit is snug. The cupholders are located at the rear of the center armrest, but then with three pedals, a steering wheel and six manually manipulated gears, you’re having too much fun to worry about taking a sip of something.