Some of the most striking cars of the Roaring Twenties were manufactured by E. Paul Du Pont, a member of the same well-known family that made a fortune producing paint and chemicals.

Based in Wilmington, Delaware, Du Pont Motors, Inc. was established during World War I to manufacture marine engines for use during the conflict. When the war ended and marine engines were no longer needed, the company shifted to automobile production. Their first car, the Model A, debuted in 1919 at the Commodore Hotel in New York, a venue that ensured the new automobile would be noticed by all of the right people.

As the 1920s progressed and the American economy boomed, Du Pont began to build ever larger and more luxurious vehicles targeted at the growing number of motorists seeking to proclaim their new affluence. They built four- and six-cylinder vehicles until 1929, the year that their largest car, the eight-cylinder Model G, debuted. 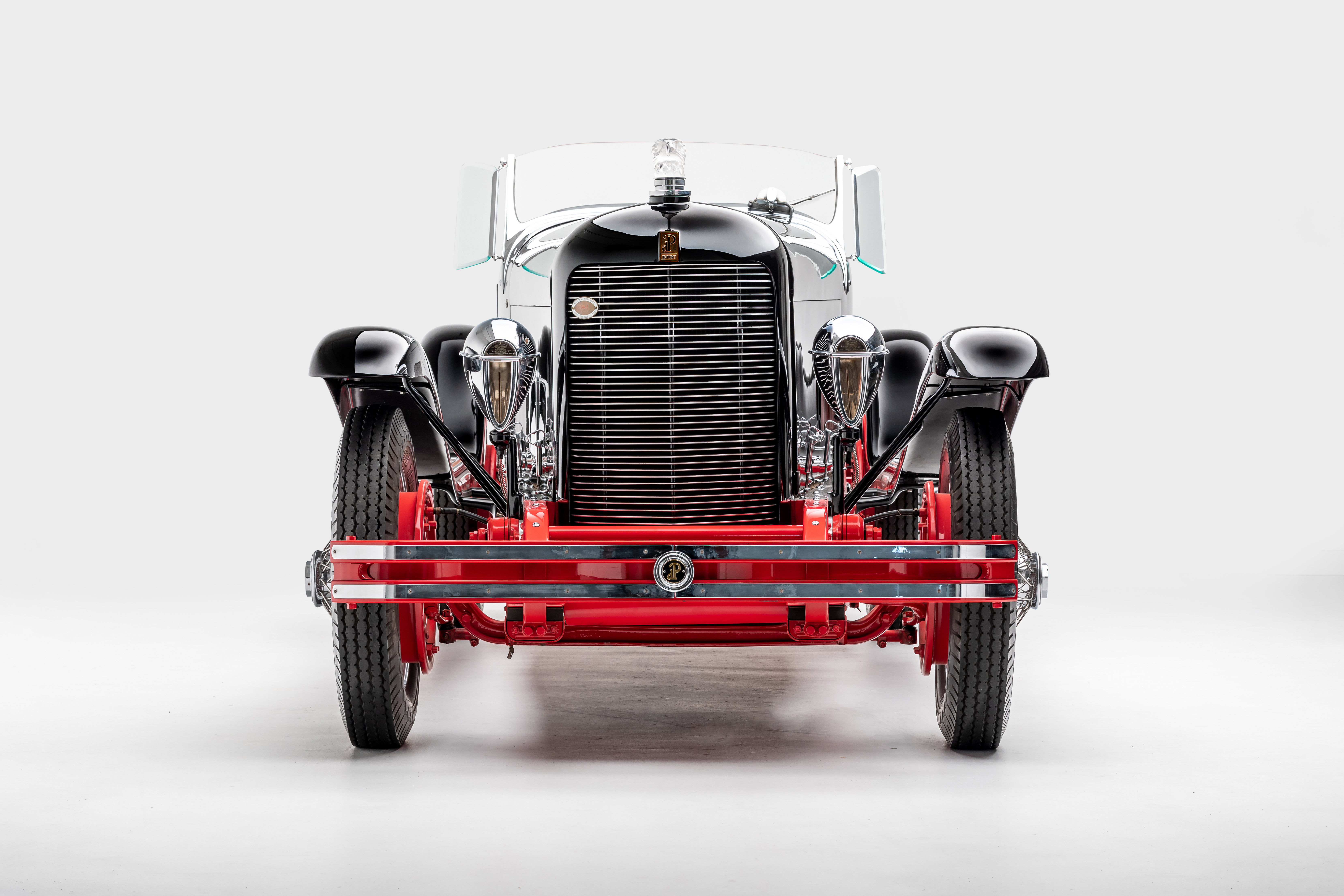 Desiring to prove the new car’s capability, the company entered four Model Gs in the Grand Prix d’Endurance at Le Mans. Then, to take advantage of the publicity generated by their participation in a competition of such international acclaim, Du Pont produced both two- and four-place versions of their race car for sale to the public.

A total of 273 Model G Du Ponts of all types were constructed in a variety of body styles — including a phaeton, coupe, sedan, victoria, limousine, convertible, and speedster. The smaller, lighter two-place speedster could reach approximately 100 miles per hour and sold for a high $5,335 when new. It could be ordered with either a disappearing or non-disappearing top. 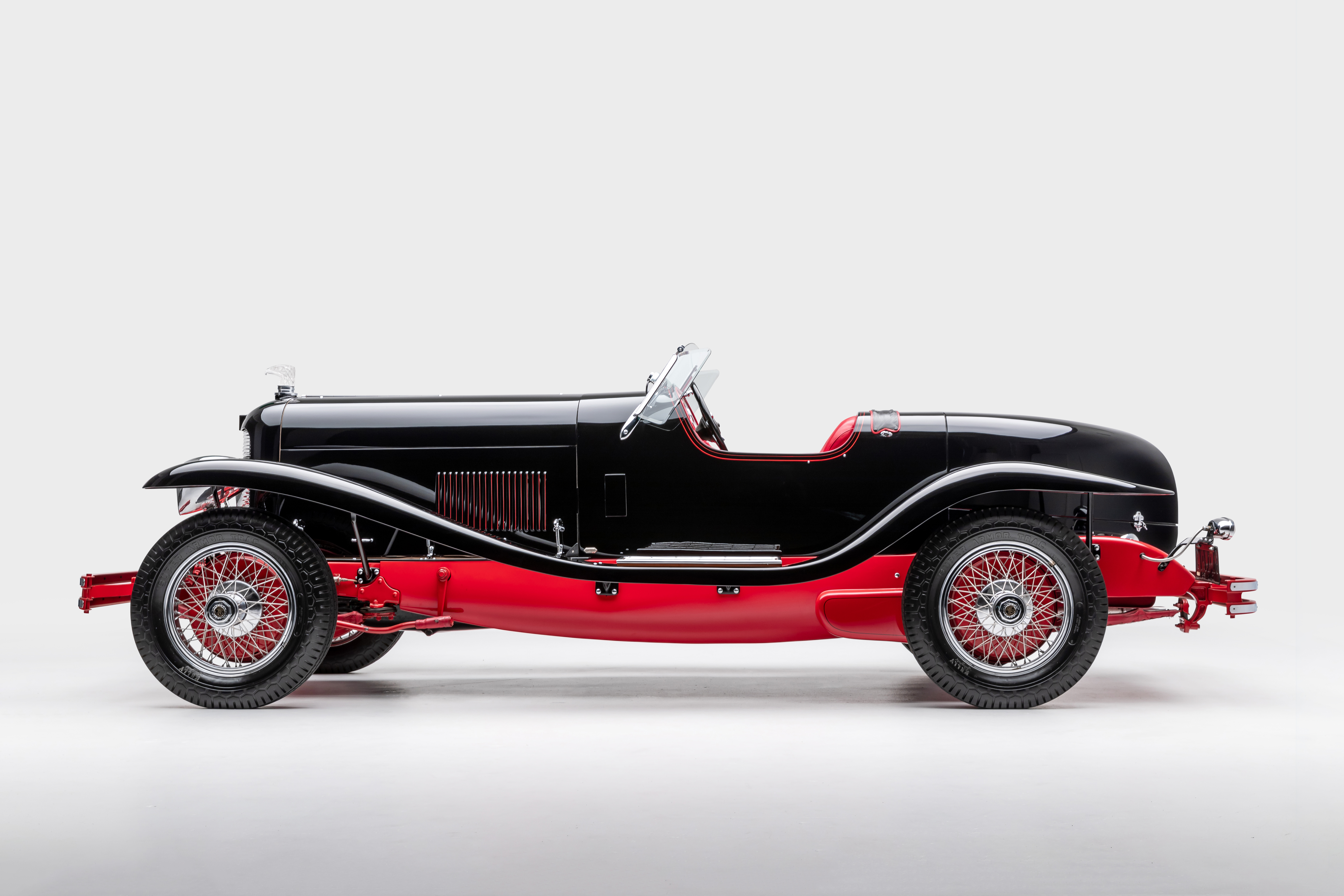 The press was enthusiastic about the powerful new model and it found favor with a large number of influential buyers. Famous Du Pont owners included Will Rogers, Jack Dempsey and Douglas Fairbanks, who received one as a gift from his wife, Mary Pickford.

All Model G Du Ponts had hand-built coachwork by some of the best known body makers of the day, such as Derham, Waterhouse and Merrimac, who coachbuilt the boattail Speedsters. The large majority of cars were equipped with flat radiators while the most sporting variants, including the Speedsters, had rounded radiator shells to enhance their Art Deco appearance. Attractive though inefficient, Woodlight headlights were fitted as standard equipment.

The Model G was powered by a Continental straight-eight engine modified by Du Pont for increased horsepower and fitted with an ersatz valve cover to give the appearance that it was equipped with overhead valves, an advanced feature during the 1920s. Customers could choose either a three- or four-speed transmission. 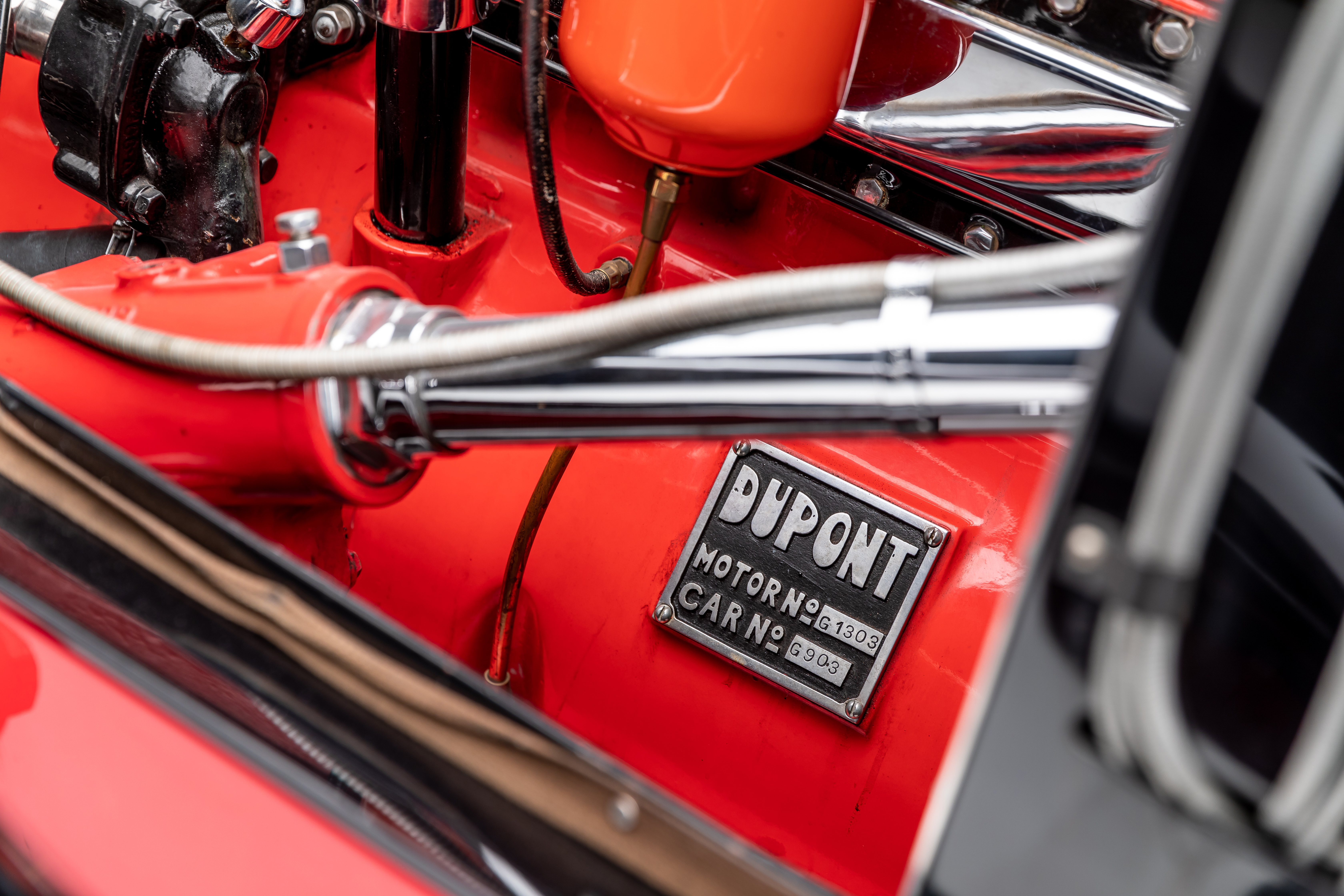 Records do not exist showing how many Du Pont Speedsters were originally constructed, although only nine are known to survive: three four-seat models, three two-seat models with a rounded rear deck, and three two-place boattails, such as the one delivered new to Los Angeles and sold by area dealer E.A. Van Trump, Jr. Inc. to W.H. Hodgeman complete with factory-installed disappearing top and optional four-speed gearbox.

After almost two decades in the hands of its original owner, the Du Pont was acquired in 1938 by Howard Newcome, who treasured the car for 20 years before selling it to the Harrah Automobile Collection.  The roadster remained in original, though worn, condition until the late 1980s when it was restored to its current concours standard — at which time the genuine Lalique Eagle’s Head radiator mascot was fitted.

The extremely rare Du Pont came into the possession of the Petersen Automotive Museum in 1999.  After a careful preparation, it was then shown at the Pebble Beach Concours d’Elegance, where it generated an overwhelmingly positive reaction from both aficionados and the general public alike. It has since been shown at numerous other venues, including The Quail: A Motorsports Gathering, the Palos Verdes Concours d’Elegance, and, most recently, at the Palm Springs Desert Classic, where it won the coveted trophy for Most Important Prewar Car. 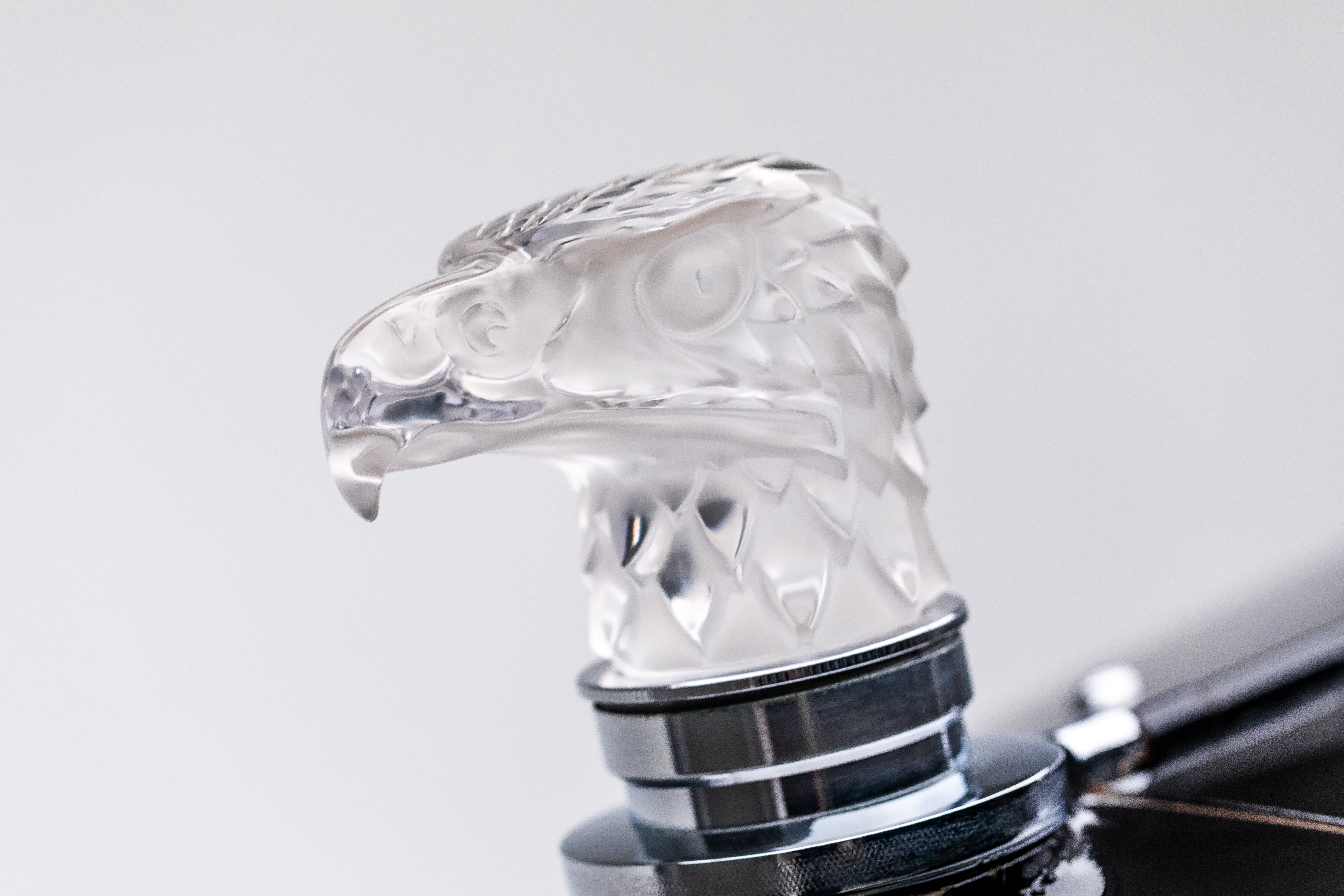 Driving the Du Pont offers a combination of surprising challenges and unexpected delights. Unlike modern cars that have a door for every seating position, accessing the cockpit involves entering through the single passenger side door and sliding across the bench seat and behind the wheel. Starting the engine requires careful manipulation of the choke and spark advance while pressing the floor-mounted starter button, but once underway there is seldom a need to make adjustments.

Though heavy, the Du Pont is not difficult to steer even at very low speeds and the engine has so much torque that shifting its four-speed transmission is rarely required, even going up steep grades. Yet while it has the appearance of a sports car, it is somewhat ponderous in corners and the hood is so long that it can be difficult to see the road ahead. It is not a car to be rushed. 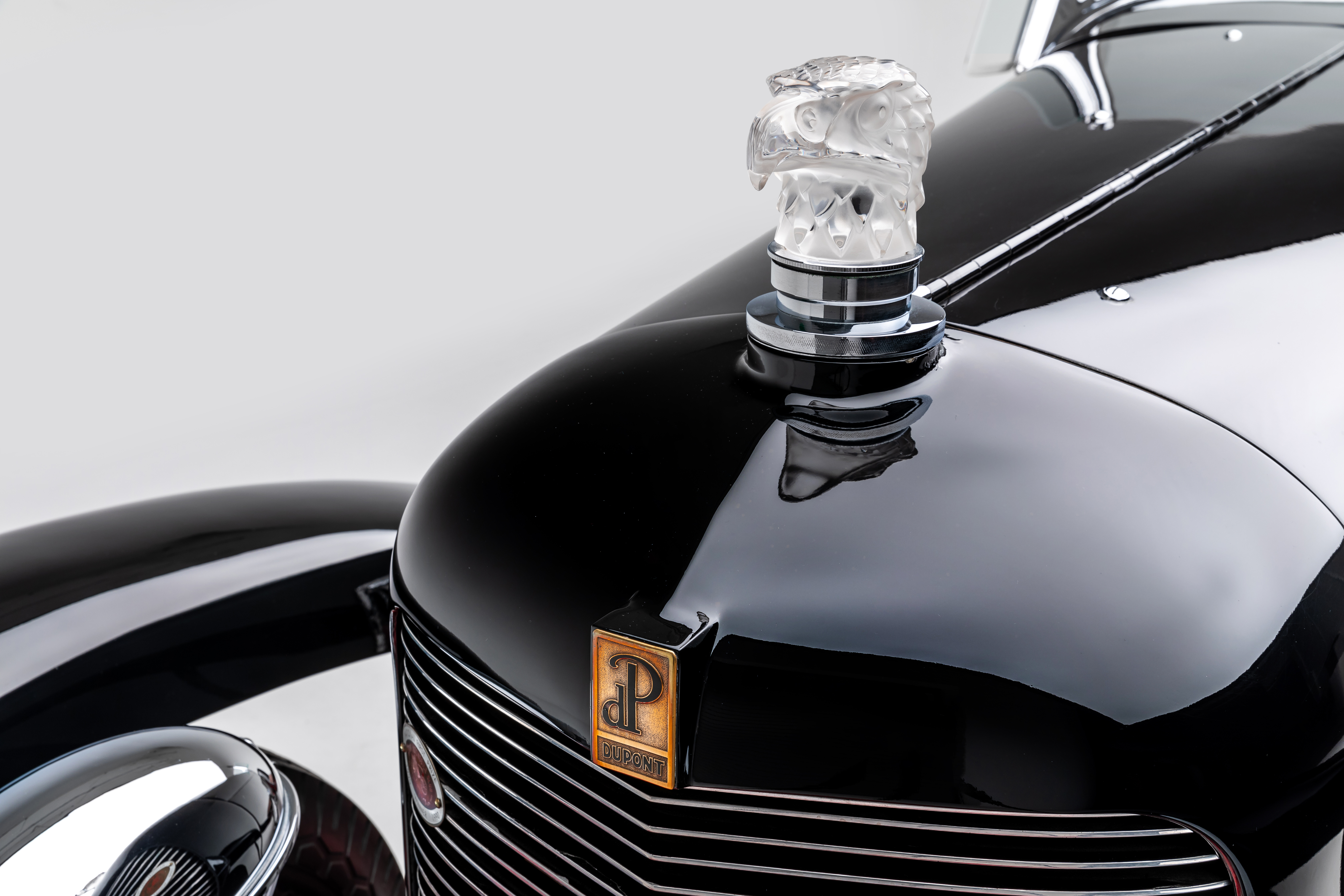 Unmistakably American, the Du Pont was intended for the growing stretches of open road that were beginning to connect major population centers during the late 1920s and early 1930s. Whether in Los Angeles traffic or on the lawn at the Pebble Beach Concours d’Elegance, it stands out as the embodiment of the carefree spirit of a more innocent time.