Despite being asked, “Are you mad, Anton?” a Belgian architect will attempt to complete the 2019 Peking to Paris rally in a three-wheeler similar to one that didn’t get all that far in the inaugural competition back in 1907.

Anton Gonnissen, 58, has completed three Dakars, four Rallies of Egypt and the UAE desert rally in cars, trucks and even on an ATV. He will enter the 2019 Peking to Paris event which begins June 2, in a 112-year-old Contal Mototri, a French vehicle like one of the five that started the 1907 event. Also competing in 190 were a Dutch Spyker, two French Dion Boutons, and the winning Italian Itala driven by Prince Scipione Borghese.

That earlier Contal Mototri was entered by Auguste Pons and Oscar Foucauld, both French, who became stranded in the Gobi Desert and nearly died while walking back to Peking.

According to a news release from the Endurance Rally Association, Gonnissen was inspired by learning of the 1907 entry travail, found one of the rare Contal Mototri three-wheelers still existing, put it through structural testing at Ghent University, made improvements to the chassis, wheels and engine and has prepared it for the rally, which led to the rally director from the Endurance Rally Association questioning the architect’s sanity.

But the real question of sanity should be directed to Gonnissen’s navigator, Herman Gelan, another architect who will be sitting out front in the vehicle’s “suicide” seat. Though at least Gelan’s seat is mounted above the front suspension. There is no shock-reducing system at the rear of the three-wheeler, although Gonnissen has installed the seat from the modern Harley Davidson motorcycle saddle to replace the original “bottom crusher.”

Although he has competed in marathons and triathlons, this will be Gelan’s first participation in a motoring challenge.

With Gelan out front and Gonnissen at the rear, the route covers 8,600 miles and 36 days.

“The story for Auguste Pons was a short one,” Gonnissen is quoted in the Peking to Paris rally news release. “Stranded without petrol early in the race they couldn’t be rescued by the other competitors as they were ahead of them. They ended up drinking the water out of the radiator, and then started their perilously long walk back to Peking in the heat. They nearly died and the Contal is still out there covered by sand somewhere.”

Regarding his own Contal Mototri, Gonnissen said, “We have tried to keep as many original parts as possible, which is why some components of the original trike will be in place. In some cases we have simply had to beef up the chassis with the endurance rally and the finish in mind.

“We know this will be a life changing event, but it could turn us, ordinary men, into heroes if we can get the Contal Mototri all the way to Paris and finish the job for Auguste Pons 112 years on.” 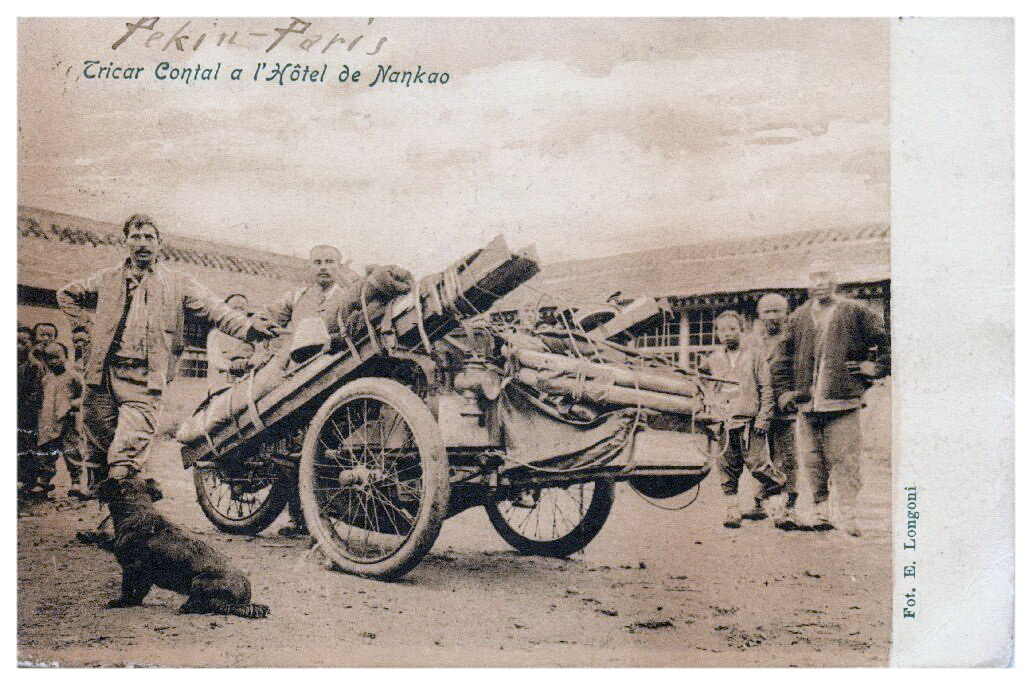