Albert Crocker was so confident in his motorcycles that he sold them with a guarantee: If any Crocker owner was beaten in a race against an Indian or Harley-Davidson machine, Crocker would refund the purchase price. Reportedly, no one ever asked for their money back.

“The crème de la crème of American V-twins, Crocker motorcycles are legendary for their performance, amazing styling and the can-do spirit of their builder, Albert Crocker,” Mecum Auctions says of one of the stars of its upcoming and 28th annual Las Vegas Vintage & Antique Motorcycle Auction, scheduled for January 22-27 at the South Point hotel and casino just south of The Strip on Las Vegas Boulevard.

The auction will offer 1,750 motorcycles to bidders. Among the stars of the auction is the 1939 Crocker Big Tank that is part of the nearly 240-motorcycle consignment from the MC Collection of Stockholm, Sweden, where the museum has been “a world-renowned showcase of mechanical art and design.”

The museum is downsizing its collection as part of its move to a new location. The Big Tank Crocker has a pre-auction estimated value of $400,000 to $500,000.

Al Crocker left Northwestern University at the turn of the 20th century with a degree in engineering and went to work for the Aurora Automatic Machine Company, which produced engines for Indian and its own motorcycles under the Thor brand. He not only designed and developed motorcycles, but he raced them. While racing, he met Indian executives who recruited him to their company.

He worked at Indian’s headquarters in Springfield, Massachusetts, until 1919, when he opened an Indian dealership in Denver. Five years later, he took over Indian’s Midwest distributorship in Kansas City and in 1930 Crocker moved to Los Angeles, where he purchased yet another Indiana dealership.

He would convert that building into the headquarters of his own motorcycle business, recruiting his former engineering boss at Indian, Paul Bigsby, to join him in producing motorcycles for dirt-track “Speedway” racing competition.

At first, Crocker built Speedway frames for Indian engines he and Bigsby modified. In 1933. they introduced their own 500cc Speedway racer, which won nine of 12 heats in its debut on the dirt track at Emeryville, California.

“Demand was instantaneous for replicas,” Mecum notes, “but Crocker had limited production facilities, so only 31 Crocker Speedway models were sold.”

It wasn’t long, however, before Crocker “turned his attention to the project which would hammer his name in stone: the big V-twin,” Mecum adds.

Crocker and Bigsby produced a new overhead-valve, hemi-head V-twin engine in 1935 and were intent on making not only the fastest production motorcycle in the world, but also the strongest and best-handling. 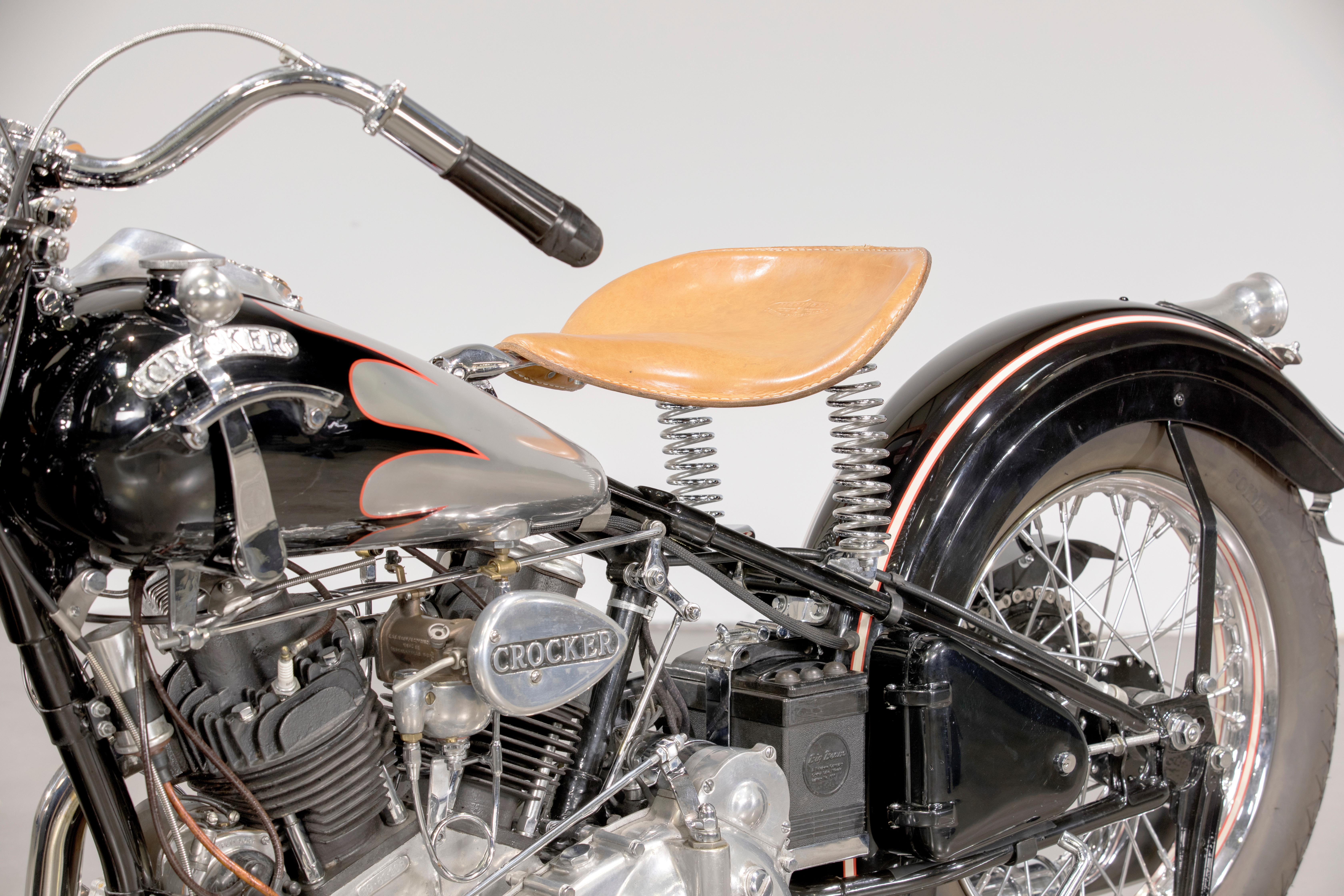 Though production motorcycles, each was bespoke with the buyer getting to specify such things as engine displacement, which could range from 62 to 100 cubic inches. Even the 62cid engine pumped out as much as 60 horsepower, some 40 percent more than competitor machines.

Starting with the 28th Crocker V-twin, the cylinder heads were redesigned and larger fuel tanks were offered. The company produced 72 of its V-twins by 1942, when production ended because of World War II. Crocker did not resume production after the war, and he lived until 1961.

After the war, Bigsby would produce steel guitars and became famous for his invention of the “whammy bar” for electric guitars. 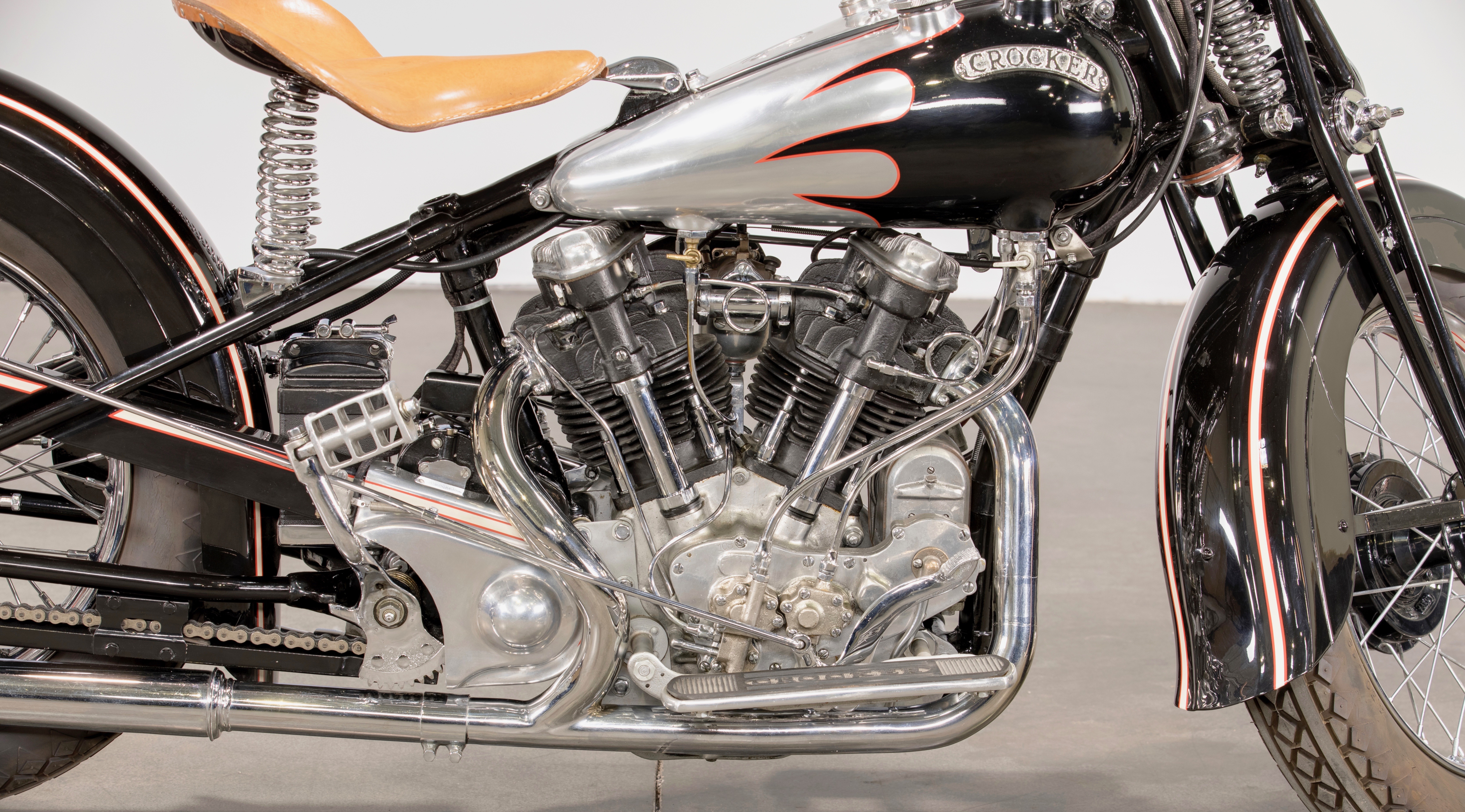 The 1939 Crocker Big Tank on offer from the MC Collection “is a genuine, gorgeous and legendary machine,” according to Mecum.

“It’s listed in the Crocker Registry, powered by Big Twin engine with serial number 39-61-108, and (was) restored by Michael Weigert in Germany, which was overseen by Crocker expert Chuck Vernon. It was previously owned by Joe Steffen of Carmel, Indiana, and it retains its 1959 Idaho title.

“With so few produced, the opportunity to buy a guaranteed real Crocker is a rare event; this machine has a long provenance, and it’s a simply exceptional restoration.”

The machine has been part of the MC Collection for more than a decade.