How the Grinch stole history

Editor’s note: As a holiday treat, we share this Christmas card from the Seal Cove Auto Museum in Maine.

Every Who down in Seal Cove liked Old Cars a lot… But the Grinch, who lived north of Seal Cove, did NOT! The Grinch hated Autos! The whole Seal Cove Museum! Now, please don’t ask why. No one quite knows the reason.

It could be his head wasn’t screwed on just right. It could be, perhaps, that his shoes were too tight. But I think that the most likely reason of all, May have been that his heart was two sizes too small.

Whatever the reason, his heart or his shoes, He stood by the Museum, hating the Whos, Staring o’er the road with frown that could kill, At the big red building, perched on the hill. For he knew every Who down in Seal Cove, wholehearted, Was busy now, cranking a Ford to get started.

“And they’re polishing their brass!” he snarled with a sneer, “Tomorrow they open! They’re getting in gear!” Then he growled, with his Grinch fingers nervously drumming, “I MUST find some way to stop Opening Day from coming!”

And THEN they’d do something he liked least of all! Every Who down in Seal Cove, the tall and the small, Would stand close together, with Brass Era horns blowing. They’d stand hand-in-hand, and would start storytelling – They’d show their visitors the insides and outs, Of these cars, their history to learn all abouts.

Then he got an idea! An awful idea! THE GRINCH GOT A WONDERFUL, AWFUL IDEA!

“I know just what to do!” The Grinch laughed like a rat. And he made a quick chauffer coat and a hat. And he chuckled, and clucked, “What a great Grinchy trick!” “With this coat and this hat, I look so slick!”

THEN He loaded some car jacks and heavy-duty straps, In a ramshackle car carrier truck, complete with maps. Then the Grinch said, “Let’s go!” And the big truck he drove, Toward the Seal Cove Museum with its Brass Era trove.

When he came to the building, across from the pond, The old Grinchy hissed, “With the cars I’ll abscond!” And he sneaked through the door, evil thoughts in his head. Then he looked all around, ‘mid the old cars he tread.

The cute little Fords were all placed in a row. “These Model Ts,” he grinned, “are the first things to go!” Then he slithered and slunk, with a smile most unpleasant, Around the whole room, he took every car present!

Cadillacs! And Maxwells! A wooden Peugeot! Stanley Steamers! A Corbin with brass all aglow! He pushed each car down through the hall, Then he loaded them up in the truck, one and all!

And as the Grinch was getting all ready to go, He heard a small sound coming in through the snow. He turned around fast, and he saw a small Who! Little Cindy-Lou Who, who was not more than two.

The Grinch had been caught by this tiny Who daughter, Who while walking by had spotted this rotter. She stared at the Grinch and said, “Chauffer man, why,” “Why are you taking our antique cars? WHY?”

But, you know, that old Grinch was so smart and so slick, He thought up a lie, and he thought it up quick! “Why, my sweet little tot,” the fake Chauffer lied, “There’s a light on this Mercer that won’t light on one side.” “So I’m taking it home to my garage, my dear.” “I’ll fix it up there. Then I’ll bring it back here.” 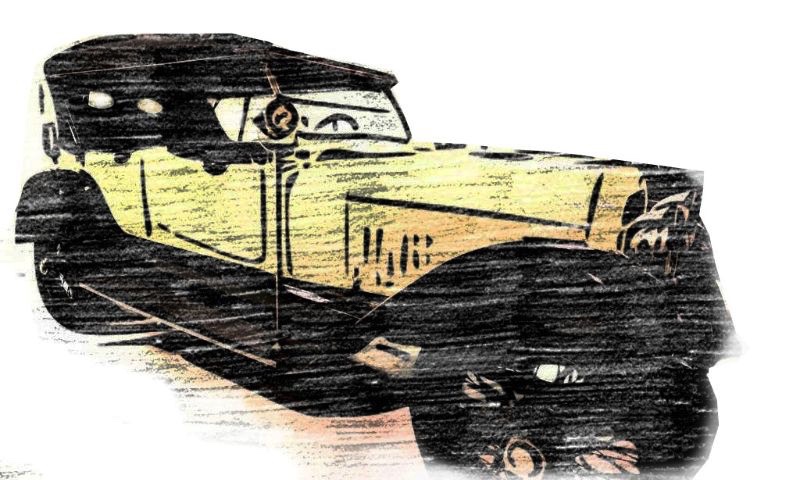 And his fib fooled the child. Proud how he’d lied, He got her her coat and he sent her outside. Then the last thing he took was the old boa horn! Off he drove in his truck, leaving Seal Cove forlorn.

It was quarter past dawn… All the Whos, fast asleep, All the Whos, still asnooze when he packed his truck deep, Packed it up with the Crane! The White! The Holsman! The Knox! And the Kimball! The old Stoddard Dayton!

Two thousand feet up! Up Acadia’s summit, He rode with his load to the tiptop to dump it! “PoohPooh to the Whos!” he was grinchishly humming. “They’re finding out now that Opening Day isn’t coming!”

“They’re just waking up! I know just what they’ll do!” “Their mouths will hang open a minute or two, Then the Whos down in Seal Cove will all cry BooHoo!” “That’s a noise,” grinned the Grinch, “That I simply MUST hear!” So he paused. And the Grinch put his hand to his ear.

And he did hear a sound rising over the snow. It started in low. Then it started to grow. But the sound wasn’t sad! Why, this sound sounded merry! It couldn’t be so! But it WAS merry! VERY!

He stared down at Seal Cove! The Grinch popped his eyes! Then he shook! What he saw was a shocking surprise! Every Who down in Seal Cove, the tall and the small, Was sharing car stories! With no autos at all!

He HADN’T stopped Opening Day from coming! IT CAME! Somehow or other, it came just the same! And the Grinch, with his grinch-feet ice-cold in the snow, Stood puzzling and puzzling: “How could it be so?” “It came without autos! It came without cars!” “It came without motorcycles, headlights or horns!”

And he puzzled three hours, till his puzzler was sore. Then the Grinch thought of something he hadn’t before! “Maybe,” he thought, “History isn’t the ‘stuff.'” “Maybe History… perhaps… in itself is enough!”

And what happened then? Well…in Seal Cove they say, That the Grinch’s small heart grew three sizes that day! And the minute his heart didn’t feel quite so tight, He whizzed with his load through the bright morning light,

And he brought back the autos! And the horns blowing crisply! And the Grinch, HE HIMSELF! Shared tales of car history!