The Volland Store gallery in the rolling Flint Hills near Alma, Kansas, might seem an unlikely place for a vintage motorcycle exhibit, but motorcycles have been an integral part of this building’s history since it was constructed in 1913.

Otto Kratzer, one of the original owners of the original Volland general store located eight miles west of Alma on old K-10 highway, was such an avid motorcyclist that he and Gene Hawes set off for California on their Indian motorcycles in October of 1914. Kratzer also liked photography and he recorded the life in and around the community of Volland, now mostly gone. But there are numerous pictures of him with his motorcycle.

In 2012, Patty and Jerry Reece purchased the Volland store to save it because the roof and floors had fallen into the basement. The exterior was in excellent shape so the structure was rebuilt from the inside out. The building is a gallery and event space and exhibits of various kinds are held throughout the year.

In 2016 I suggested an October vintage motorcycle exhibit called Time Machines as a way to honor Kratzer’s California adventure and his history with motorcycles. In addition to showcasing nine significant bikes in the gallery, the event is a gathering place for local enthusiasts who like to ride the rolling, winding roads of the Flint Hills. The two-day exhibition includes food trucks and music on the lawn.

There are several well-known motorcycle collectors in Kansas and the high-quality bikes on display were as breathtaking as expensive jewelry. Here are a few: 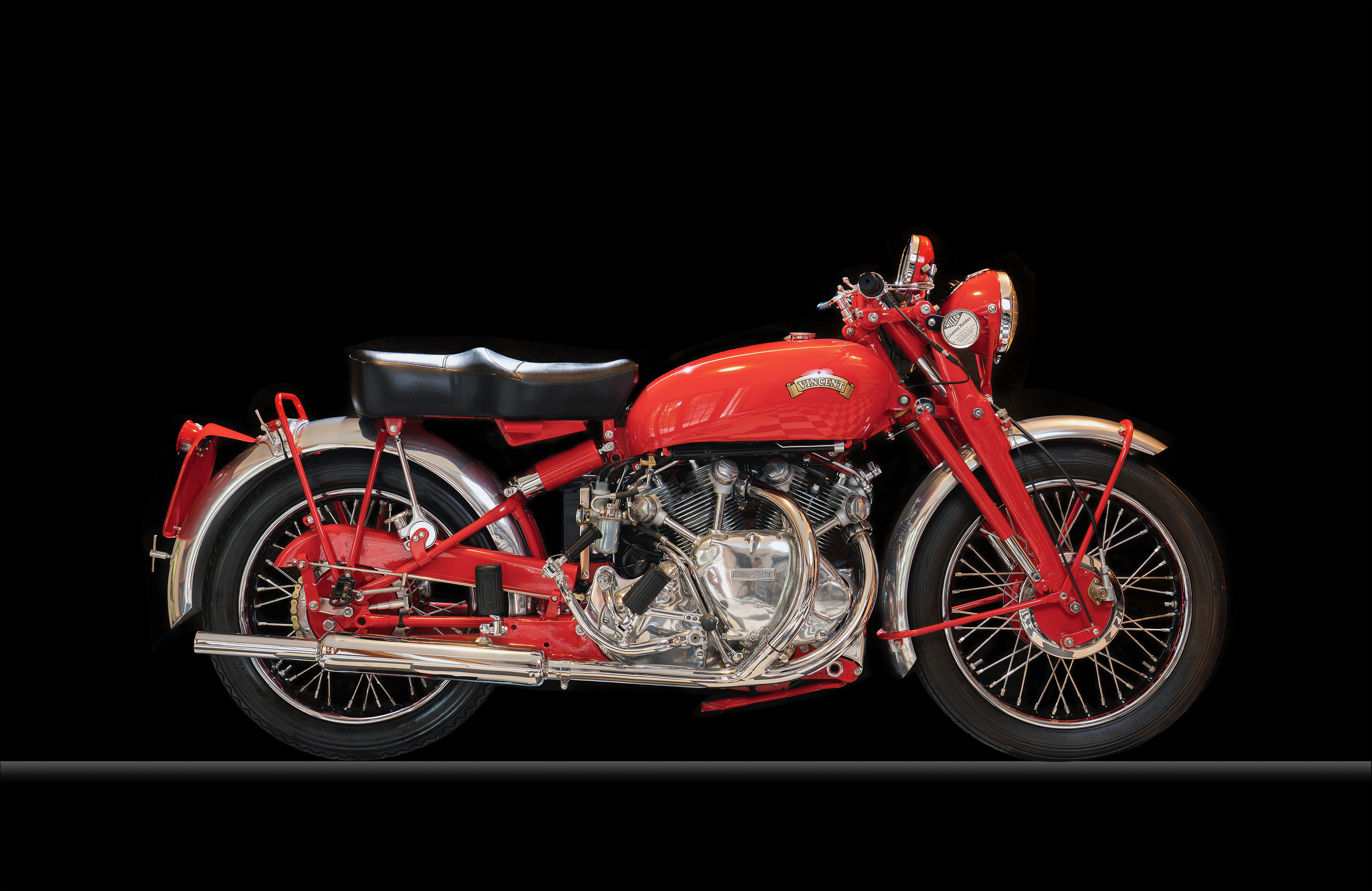 A 1950 Vincent Red Rapide: The Red Rapide is extremely rare and thought to be one of the most collectible motorcycles in the world. The 998cc V-twin engine is known for its power, even today. While most Vincent motorcycles were black, in 1950 Phil Vincent reached a sales agreement for Indian Sales Corporation to be his American agent. Indian was used to bright motorcycles and asked for bikes in a color other than black. It is estimated that 107 were sprayed Chinese Red and the color became part of the name. Dale Keesecker of Washington, Kansas, restored this model. 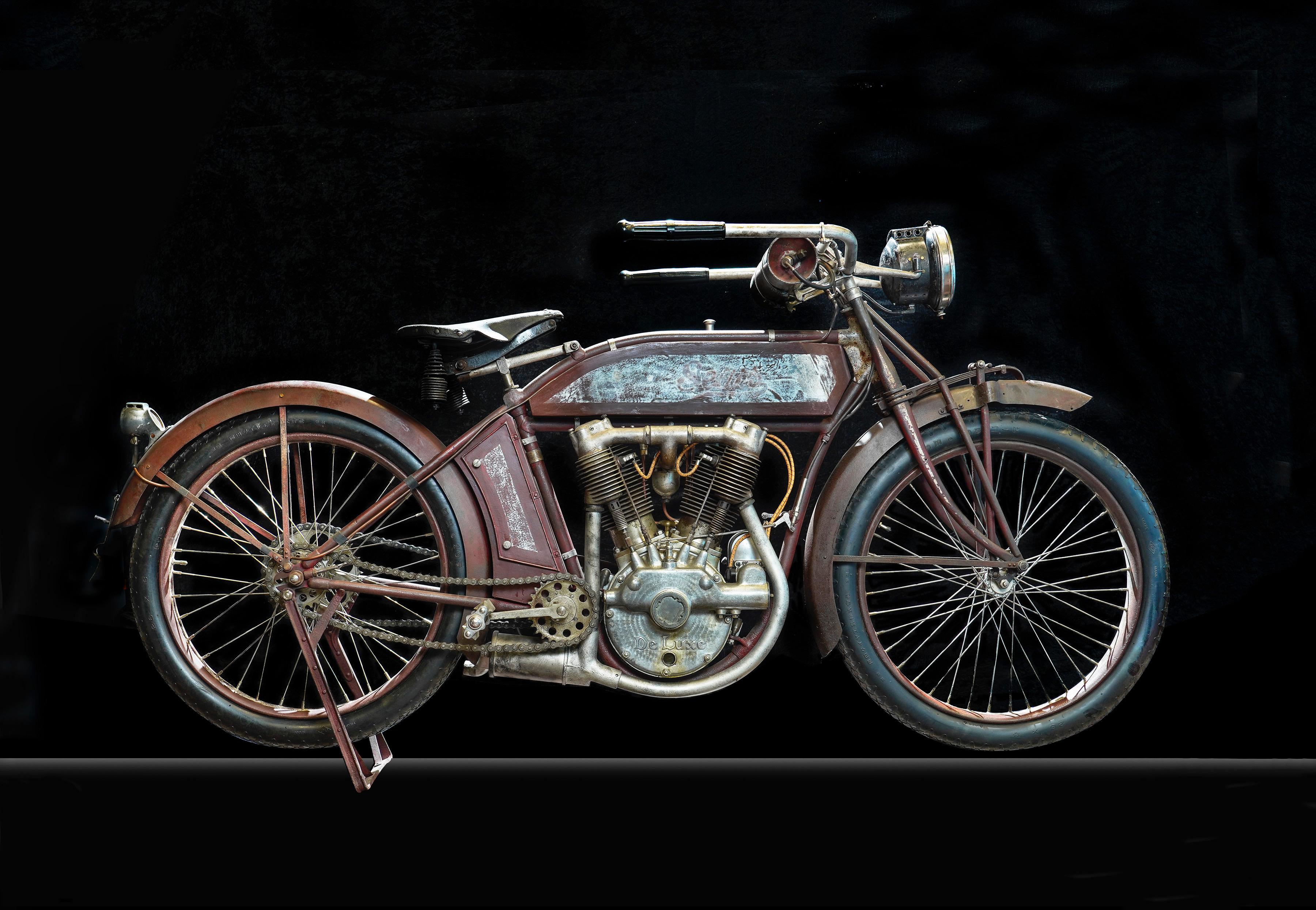 1913 Sears De Luxe: Sears Roebuck and Company added a motorcycle to its catalog in 1912. The De Luxe Dreadnought Twin had a V-twin engine was purchased from F.W. Spacke Machine Company of Indianapolis. It delivered 9 horsepower. Dan Holman of Gardner, Kansas, owns it. 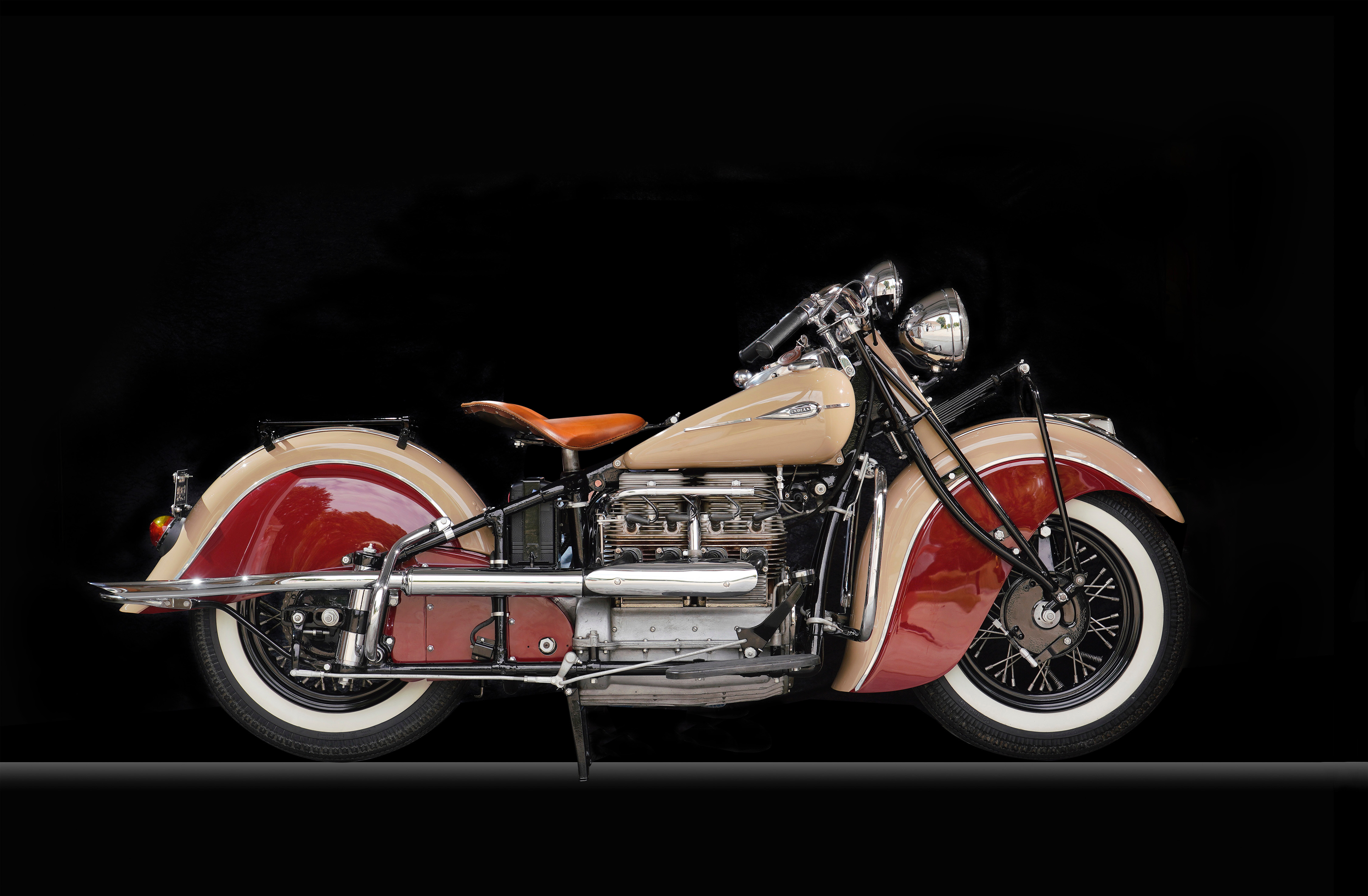 1941 Indian Four: The 1941 Indian Four’s deco styling is two-wheeled elegance. Indian bought the Ace Motorcycle Corporation in 1927 and it quickly turned out the four-cylinder Indian based on the Ace and it was sold from 1928 to 1942. The 77-cubic-inch engine was updated with a five-bearing crankshaft and in 1940 the large, decorative fenders were added as was a plunger-type rear suspension.  Jim Justice of Overland Park, Kansas, is the owner. 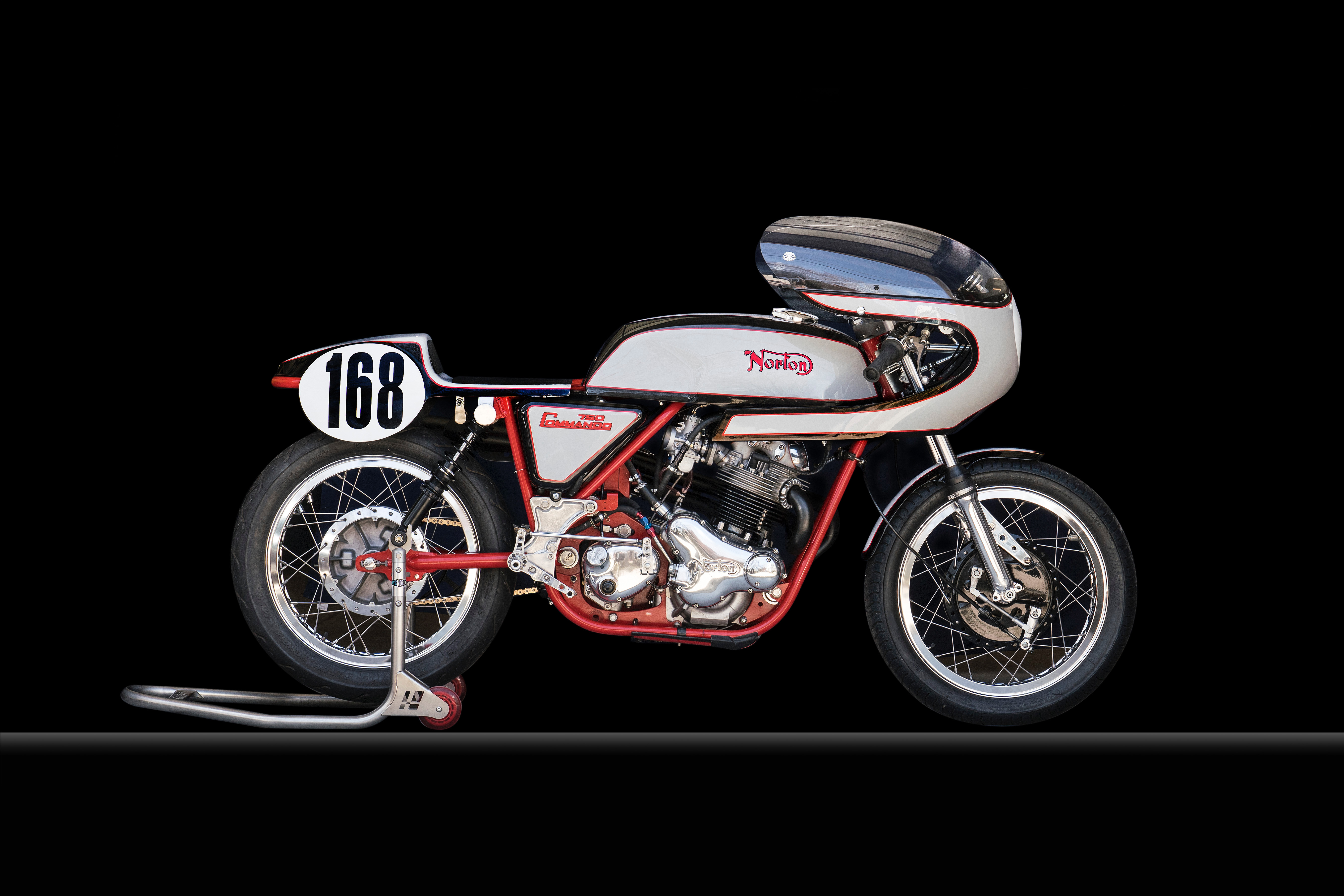 1972 Norton Commando: Ken Tripkos picked up his Norton Commando as a basket case. He meticulously rebuilt the Combat engine, added electronic ignition, a Dunstall gas tank and a Dresda fairing. It is no trailer queen because he raced it in three American Historic Motorcycle Racing Association road races. His best finish was a third in class at Road America in Wisconsin. 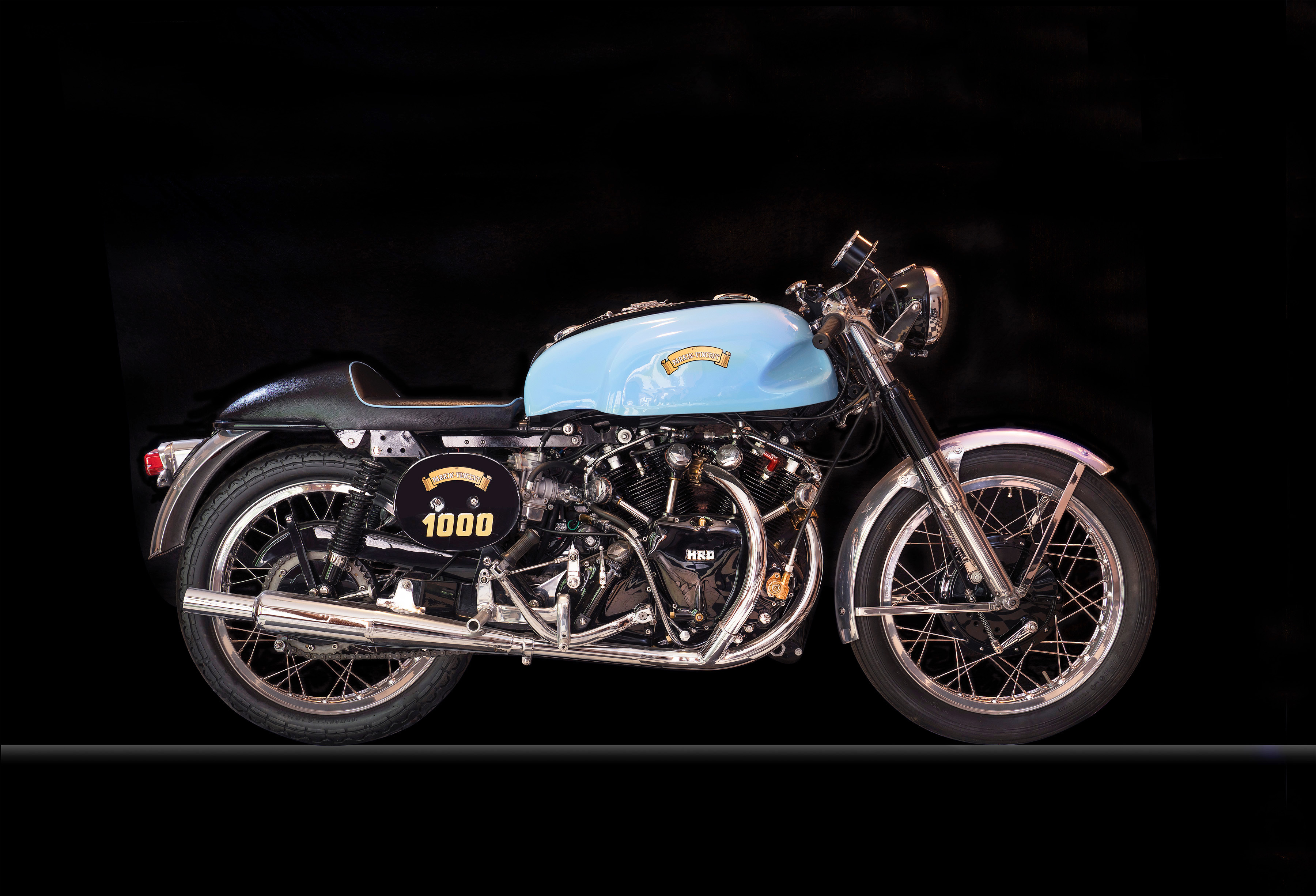 1962 Parkin Vincent: This remarkable 998cc-Vincent is the actual machine developed and raced by Derek Parkin of England. In 1962, after racing his Black Shadow for several seasons, andvusing his Black Shadow as a starting point, Parkin decided to create a production machine that could challenge the best from Norton and Triumph. Parkin completed the bike in 1967 and scored six firsts, three seconds and one third out of 10 events. Dale Keesecker of Washington, Kansas, restored it. 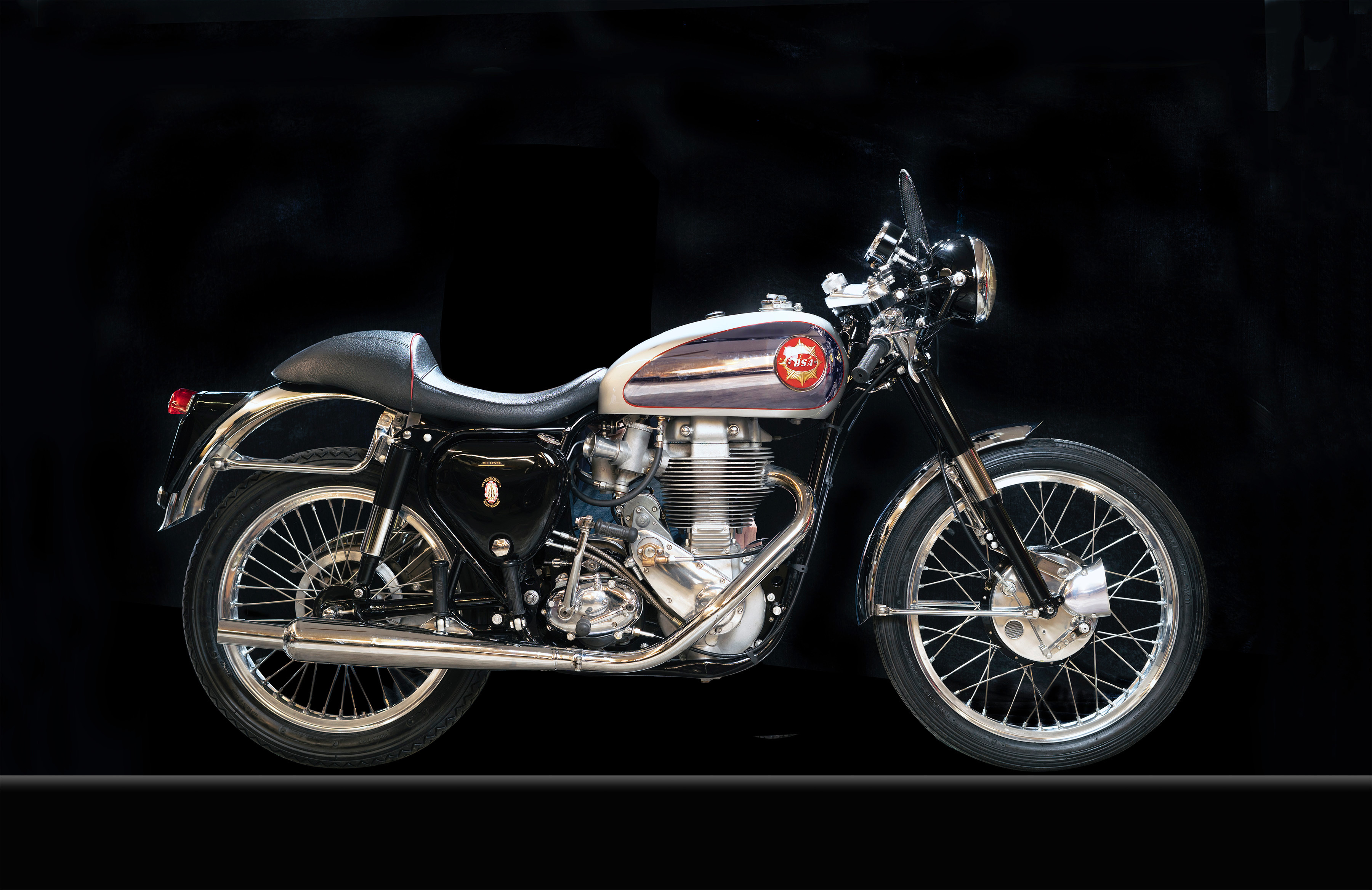 1955 BSA Gold Star: Dan Lowery of Lawrence, Kansas, is a BSA collector. His Gold Star is configured as a Clubman that you might find in the United Kingdom. It has an RRT close-ratio gearbox, a racing seat, four-gallon Clubman tank, clip-on handlebars and rear-set foot pegs. Gold Stars, made from 1938 to 1963 in 350cc and 500cc models, dominated the Isle of Man TT in 1956.

Part of the Volland Store’s legacy is that it is once again a center of community activity whenever there is an exhibit. Next year’s motorcycle exhibition will be October 19-20. Alma is just south of I-70 about 90 miles west of Kansas City.

Tom Strongman
Tom Strongman has been writing about automobiles, both new and vintage, as the automotive editor of the Kansas City Star for more than 25 years. He left the paper in 2001 to become its Contributing Editor. His work is syndicated in 20 newspapers through the Universal Uclick Syndicate, the St. Louis Suburban Journals and the Columbus Dispatch. He writes a monthly column for AAA's Home and Away Magazine website and a chain of suburban lifestyle magazines. He authored "Wheels of Dreams," a coffee-table book that is a compilation of his vintage car stories. He has covered several Formula One races plus the 24 Hours of Le Mans.