The show must go on, even without host Gene Winfield

About 100 miles north of Hollywood, past the Angeles National Forrest near Rosamond on the western fringes of the Mojave Desert, the 11th annual Winfield and Watson Custom Car and Hot Rod Gathering, sponsored by The Tossers Car Club, was held this past weekend.

It may be a desolate piece of real estate near Edwards Air Force Base, but the Gene Winfield Custom Car Shop is something of a Mecca of “Kustom Kar Kulture,” Winfield, one of the gurus of early Kustom Kar fabrication, annually throws this “Mojave Pilgrimage” where the likes of the late George Barris, Bill Hines, and Sam and Chip Foose have shown up in the past, as well as well-known pinstripers and custom painting alumni who  demonstrate their talents throughout the day. 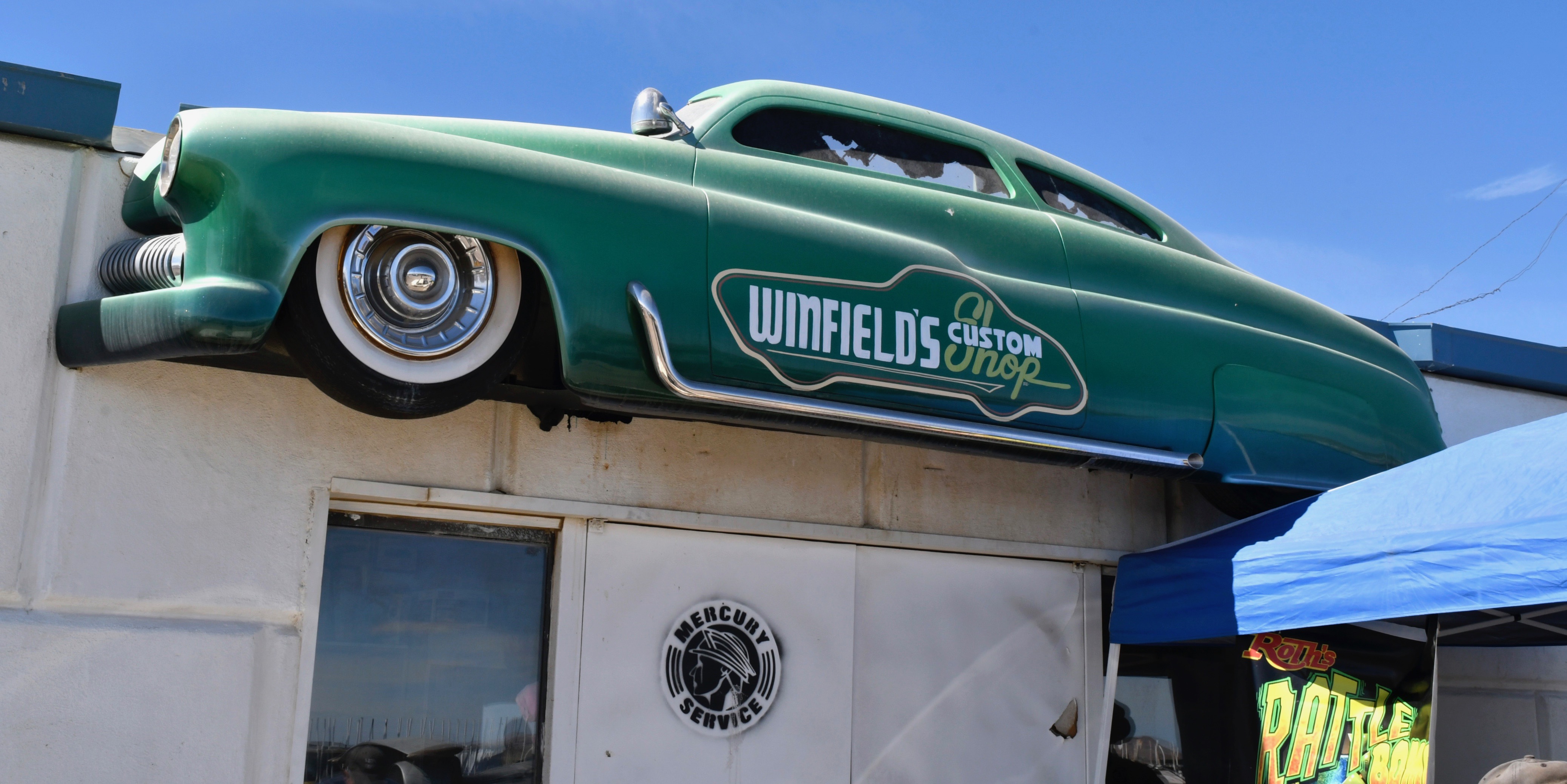 But this year the 91-year-old Winfield wasn’t present for his own party. He was on a car-show tour of Europe and while in Finland sustained a broken hip that required surgery and he is awaiting transport home. Due to the cost of the special aircraft needed for such a trip, a gofundme effort has been launched while doctors to evaluate his condition.

Winfield is an American automotive customizer and by the mid-1960s his innovative designs were recognized by the Hollywood film industry. In 1982, he worked with Syd Mead creating 25 vehicles for the film Blade Runner.

Television studios also commissioned Winfield in the 1960s to do vehicles for The Man From U.N.C.L.E. (Piranha car), Get Smart (Sunbeam Tiger), Batman (Reactor driven by Catwoman), Star Trek (Shuttlecraft “Galileo”), as well as Bewitched and Mission Impossible.

The Piranha car in The Man from U.N.C.L.E. was a plastic bodied car with a Chevrolet Corvair engine in the rear and was meant to show the usability of ABS plastic as an automotive material.

It’s always a pleasure to get out of Los Angeles, so the relaxing two-hour cruise through the Antelope Valley past the historic Willow Springs Raceway to Winfield’s place, a living, breathing salvage yard of treasures, was a welcomed get-a-way. Five acres of what was once a wrecking yard is now a trove of used car parts that blanket the spread.

Right at the entrance off Sierra Highway each year, Winfield stages a custom car. This year the field was a little lite due to thunder and lightning in the LA area, but notable customs made the pilgrimage to Winfield’s isolated shop.

The star car on display that was the car that put Winfield on the custom car map, the gorgeous Jade Idol. This work of art was a 1956 Mercury two-door hardtop that Winfield designed and restyled for Leroy Kemmerer. The car took two years to build and is finished with one of Winfield’s noteworthy fade-paint jobs in multiple tones of candy and pearl greens over a pearl white and black base and some gold powered for extra sparkle.

A pearl white naugahyde and green velvet interior with front seats that swivel (“cocktail” chairs) is accented by a television. It also has  instruments that move with he steering column hub.

Two other favorite builds of Winfield were the Solar Scene, a chopped and channeled, Buick Nailhead-powered 1950 Mercury with front seats that pivot outside of the car, and the Reactor, a futuristic aluminum show-car built on a Citroen chassis with twist steering and featuring a semi-bubble windshield and top, with a turbocharged Chevrolet Corvair drivetrain up front.

The show this year also featured a charity art auction to benefit the Alzheimer’s Association and The Progeria Research Foundation.