What Bob wants at Russo and Steele’s Scottsdale auction

By far the most-dramatic and action-packed collector car sale of Arizona Auction Week, Russo and Steele has grown into its new-and-improved location at Salt River Fields in Scottsdale (technically, the big sports complex is part of the Salt River Pima-Maricopa Indian Community, but it’s just across the road from the Scottsdale border).

And of all the auctions this week, R&S seems to have the widest spread of cars on its docket, from entry-level fun vehicles for hobbyists to high-end muscle cars, classics, sports cars and late-model exotics. Truly something for everybody at this sale.

This is the signature home-base event for the Scottsdale company, and more than 800 cars are expected for the four days of bidding, today through Sunday. Wednesday morning, there was a strong crowd of potential bidders examining the prospects.

Russo and Steele – which unabashedly calls itself “The epicenter of the collector car universe!” – has several unique features among auctions, such as an in-the-round staging format set up like a bowl-shaped arena. And, of course, the excited shout-outs of auction owner Drew Alcazar – “Sold! Sold! Sold!” – as he pumps up the crowd with his ringmaster antics.

I prowled through the three open-sided tents where the cars are on display, and found quite a few that I would like to own. I narrowed them down to these 10 (plus a funky bonus shot at the end): 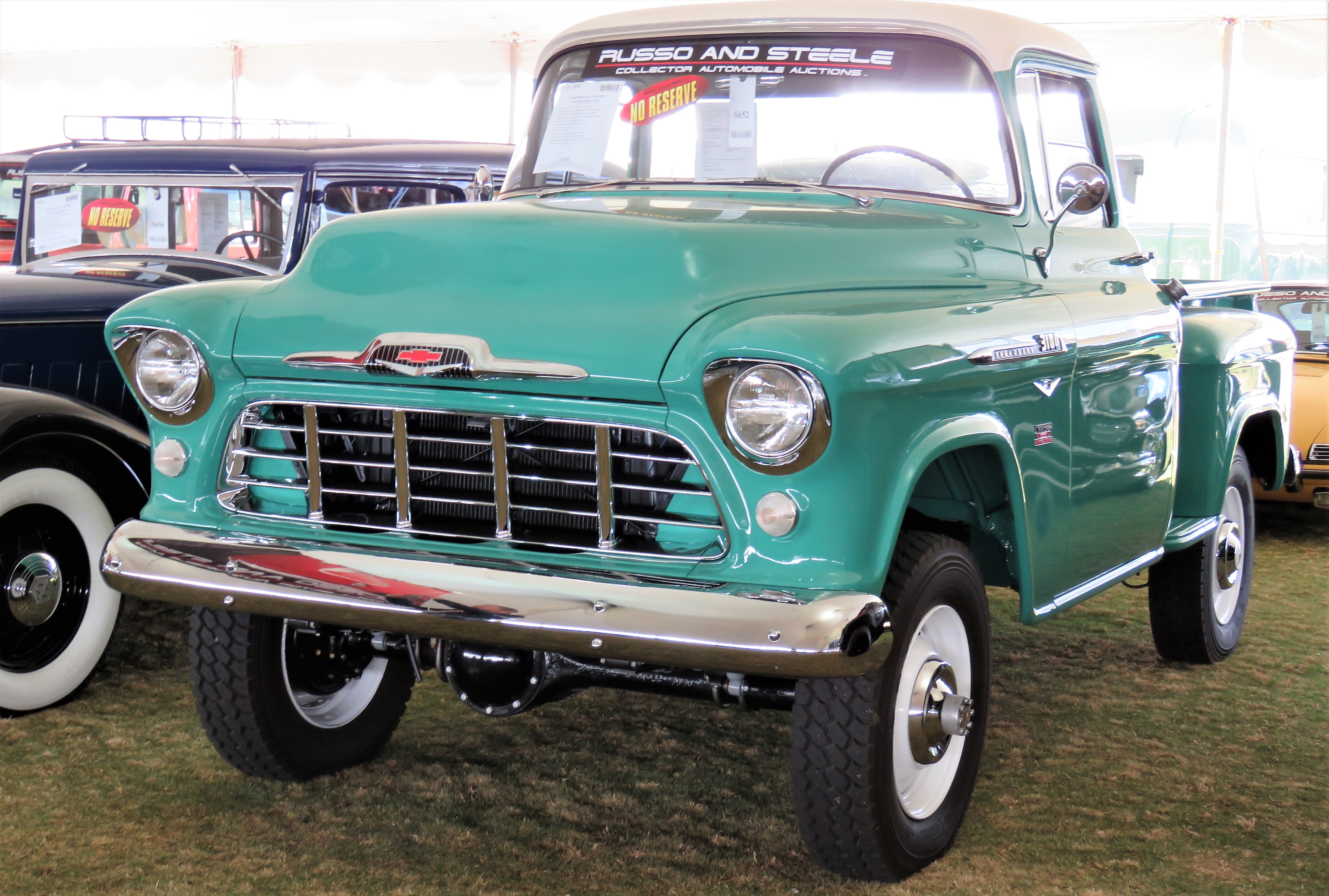 NAPCO provided four-wheel-drive systems for trucks after WWII, mostly seen on Chevrolet and GMC vehicles. This beauty looks to be an original NAPCO in fully restored condition, according to the catalog info. This would be so much fun to own and drive in the boonies, although I’d be loath to get any scratches in its lovely paint job. 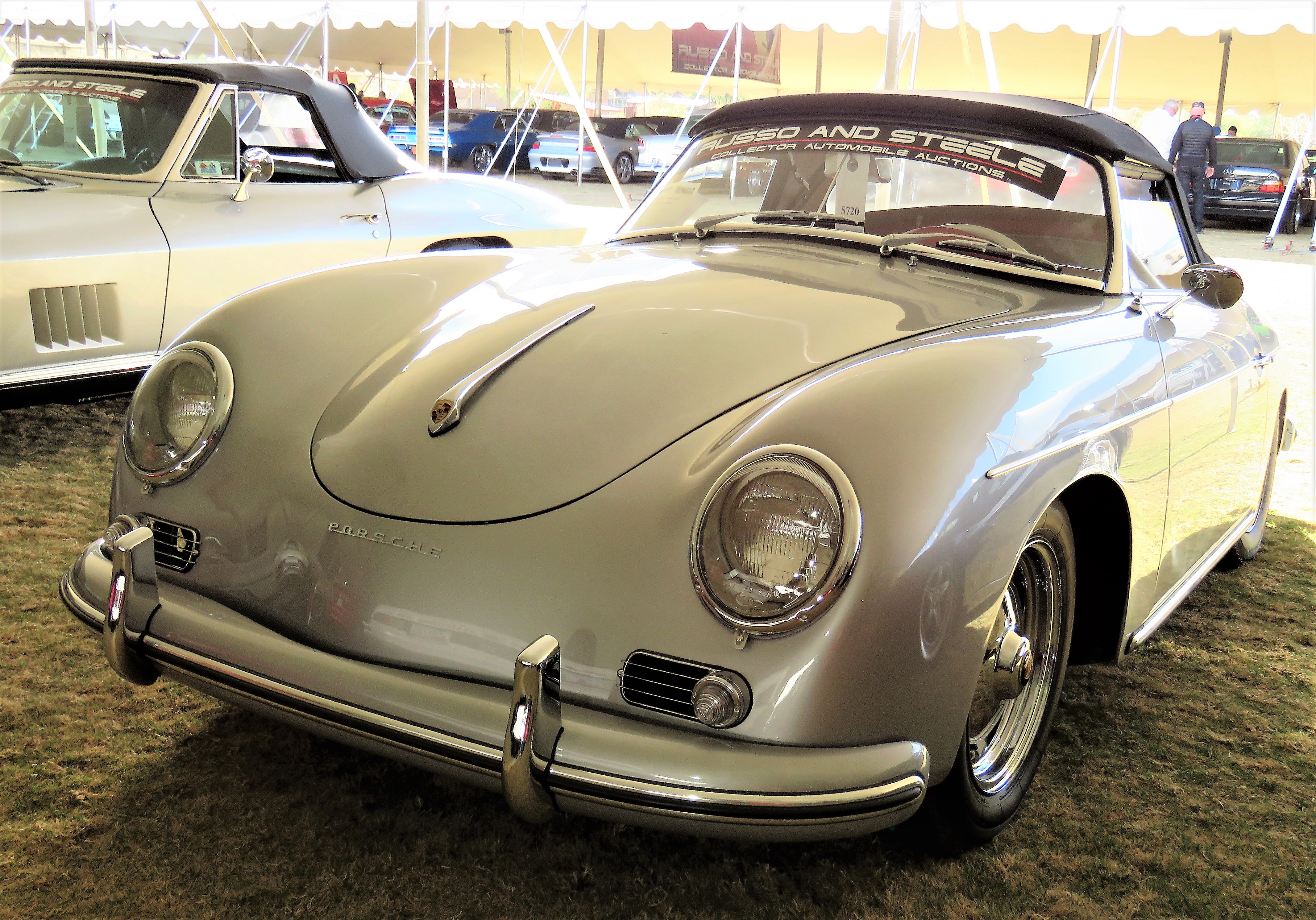 Russo has quite a few good-looking 356s on the field, but this is the one I’d most like to have. Not a Speedster with its simple roadster trim (and ever-growing resale value), the convertible has a much higher comfort level with regular seats, door panels, roll-up windows and a better-tailored top. This one is powered by the upgraded Super flat-4 engine for better drivability. Nicely painted with good chrome, and it appears to be ready to go. 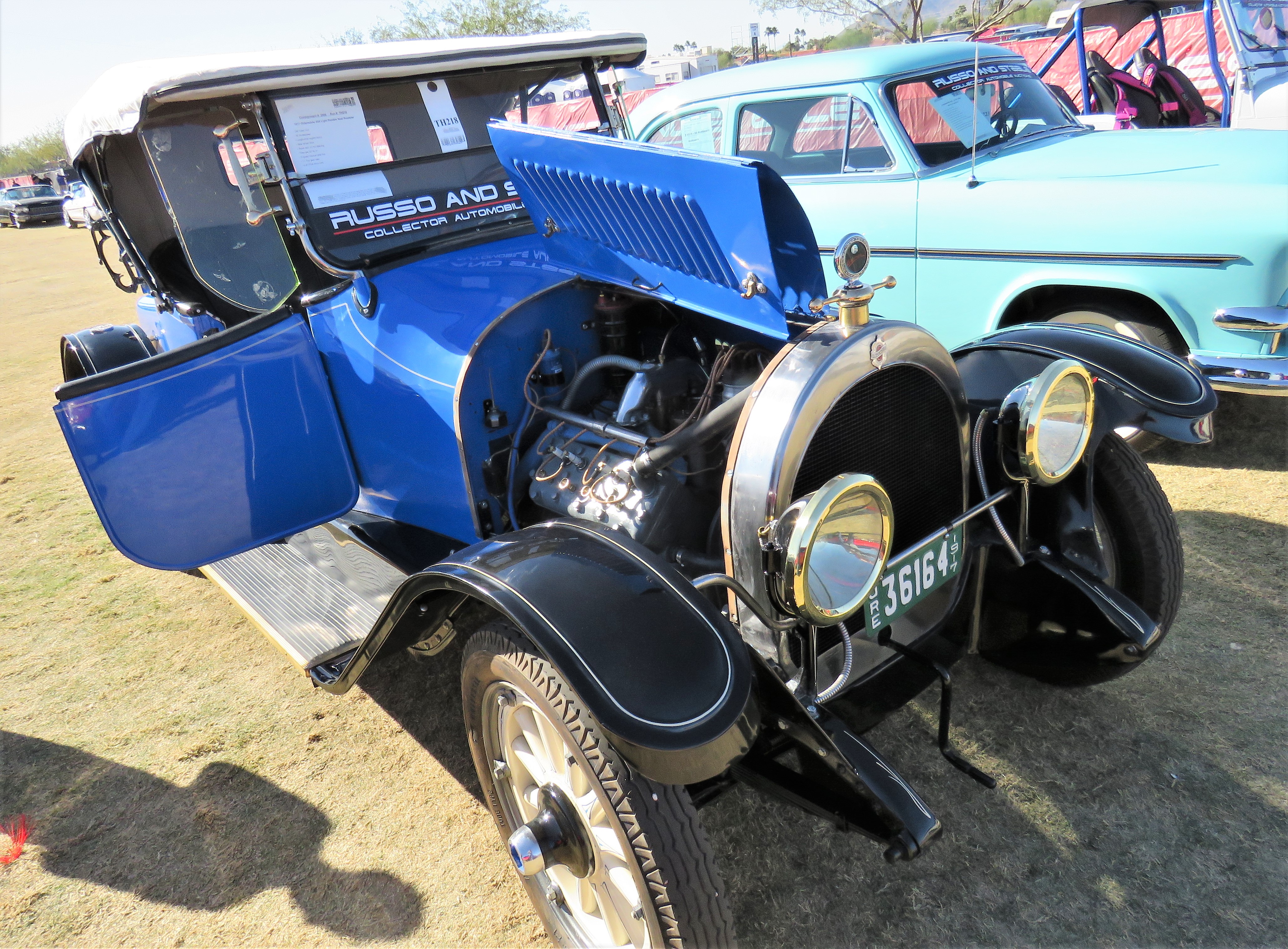 I encountered this veteran with its enthusiastic owner, who gave me a tour of its then-advanced features, such as a 58-horsepower flathead V8, many years before Ford rolled out its version. With an attractive patina to its blue paint and walnut wood trim, this Olds would be a great entry into the world of early automobiles for some handy hobbyist. 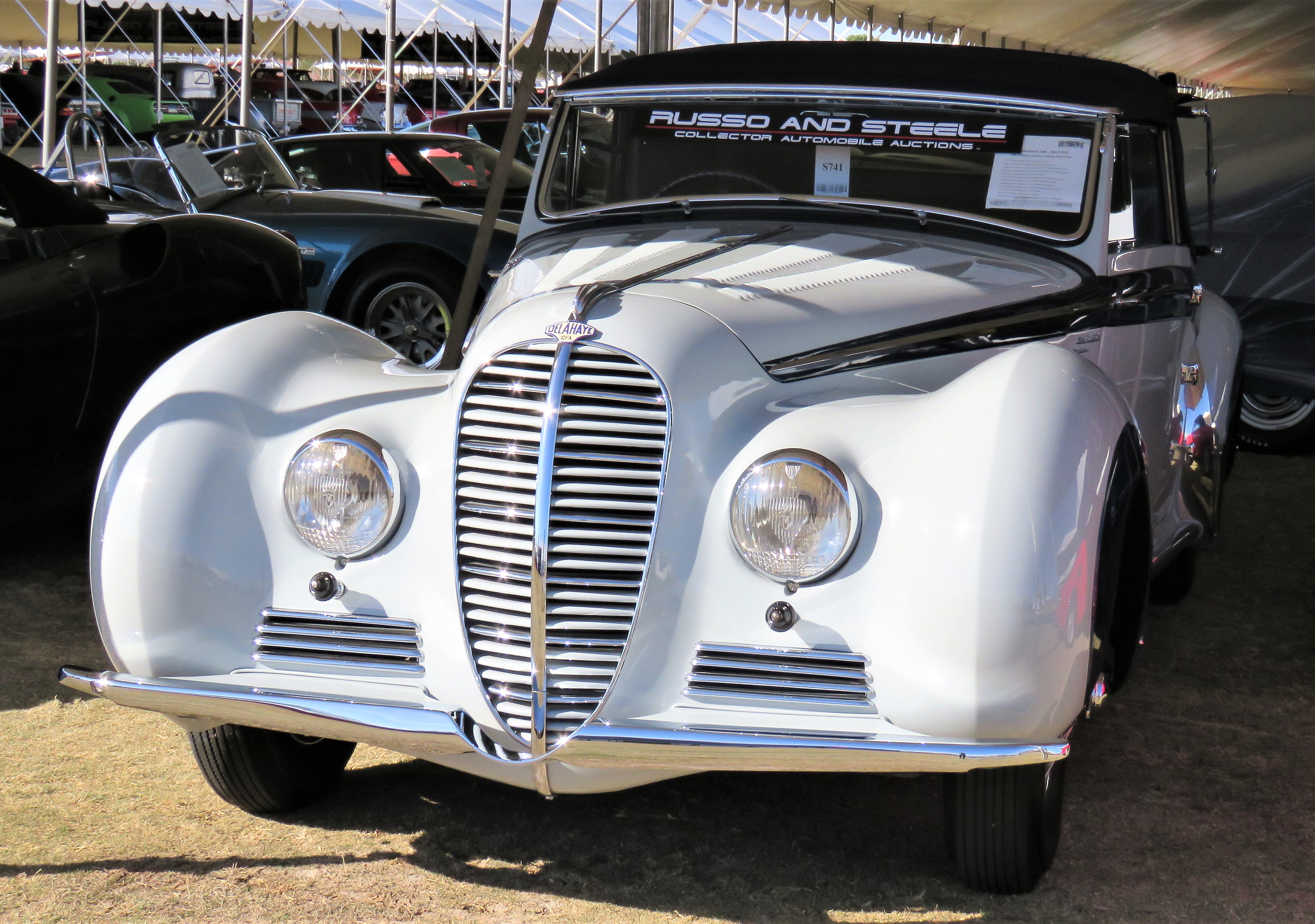 The French classic with its rare coachbuilt body is an unusual standout at R&S, a fine-art piece among the more-durable fare. Totally restored and in sparkling condition, the Delahaye debuted at the 2006 Meadow Brook Concours d’Elegance in Michigan and was shown at the 2007 Amelia Island Concours. The car has a complete history of ownership, and it is really quite an aristocrat. 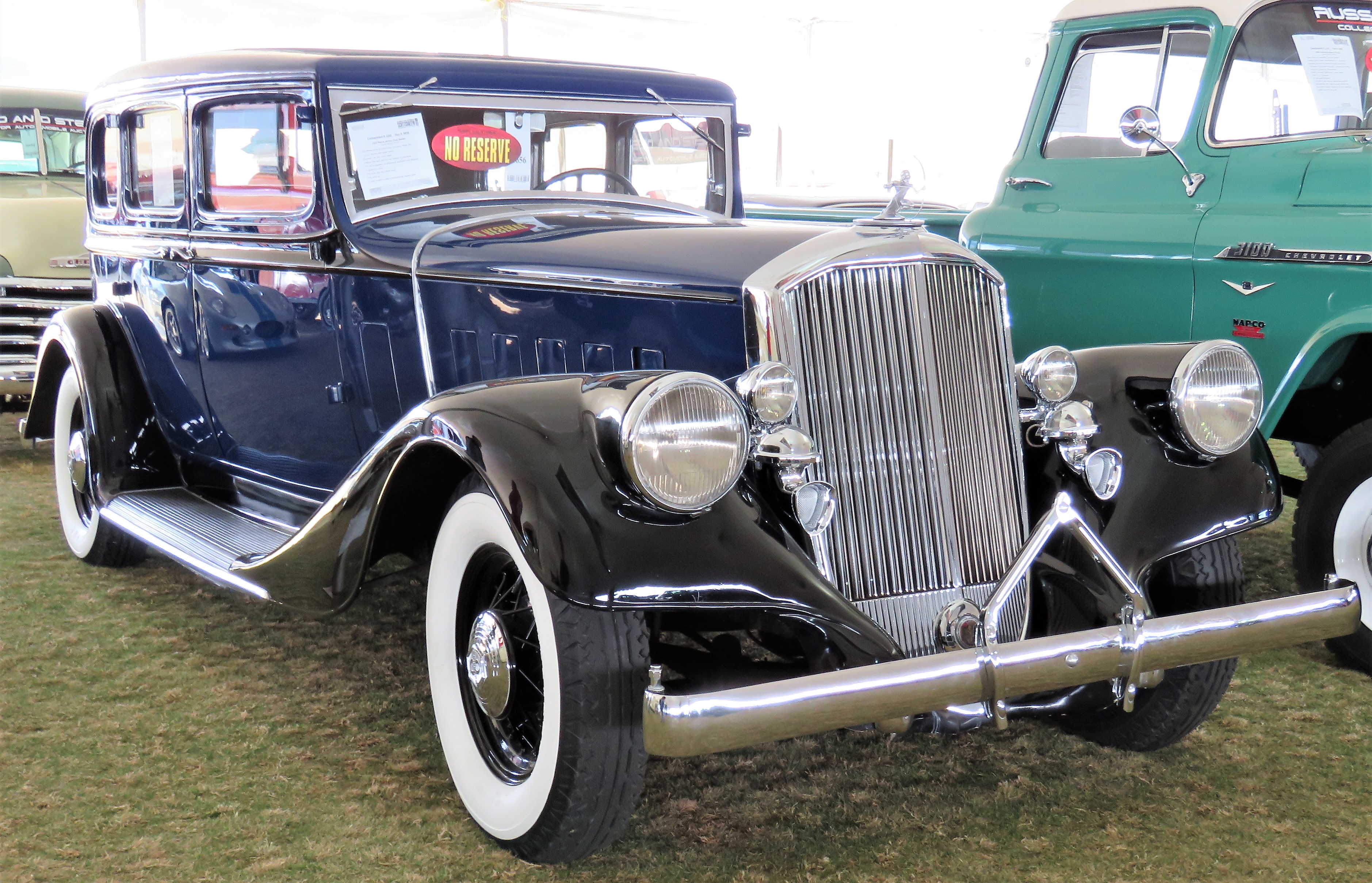 Here’s another worthy classic, a fine-looking all-American sedan that appears to be ready for show or tour. And it’s offered at no-reserve, which means somebody might drive off in this pre-war honey at a bargain price. The car looks terrific, in and out. 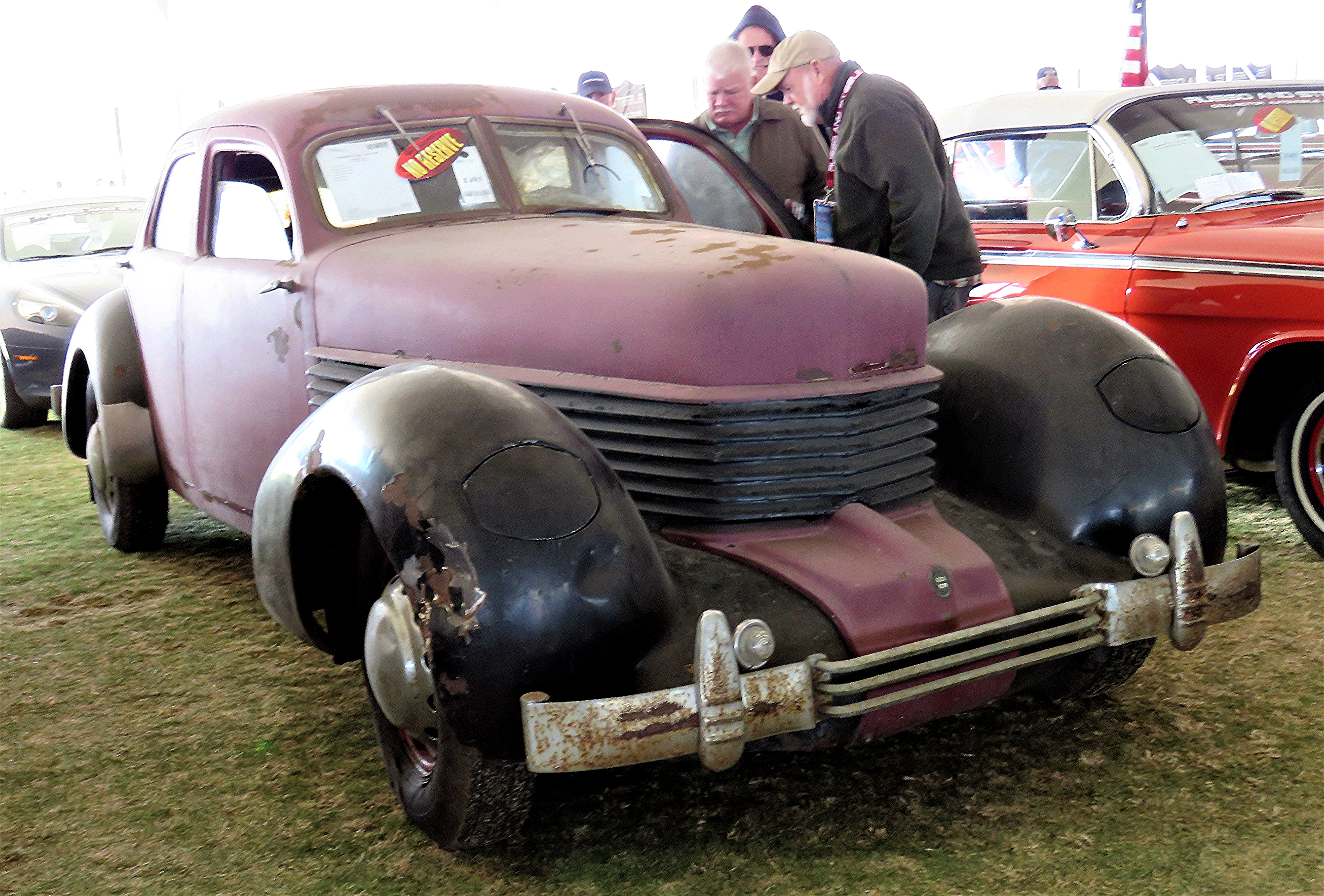 Looking for an interesting project? This Cord in derelict condition should keep you busy for a while. Stored for the past half century, and I’d say not all that carefully, this car needs it all, although such a potentially stunning sedan with its iconic Gordon Buehrig “coffin-nose” styling could be worth the effort. Just take a deep breath, open your wallet… 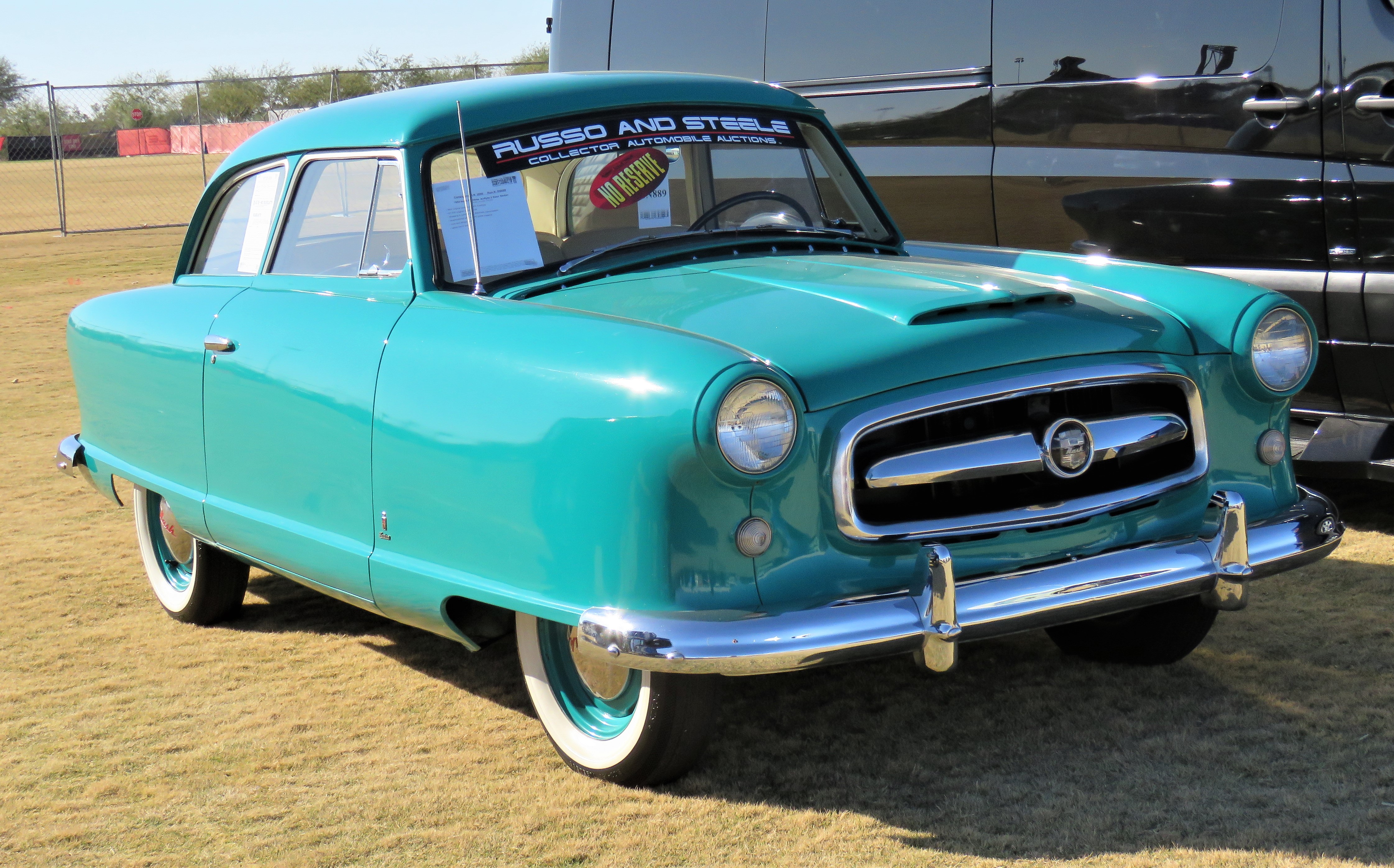 OK, I found this little critter totally charming, and I’m tempted to sign up as a bidder. Don’t ask me why. But I will say that its petite, inverted-bathtub styling nerdishly appeals to me. These cars are more-often seen as either wagons or convertibles, famously driven by Lois Lane in the Superman movies, and I believe the coupe is more unusual. This one has been upgraded with a six-cylinder Ford Falcon engine and automatic transmission. 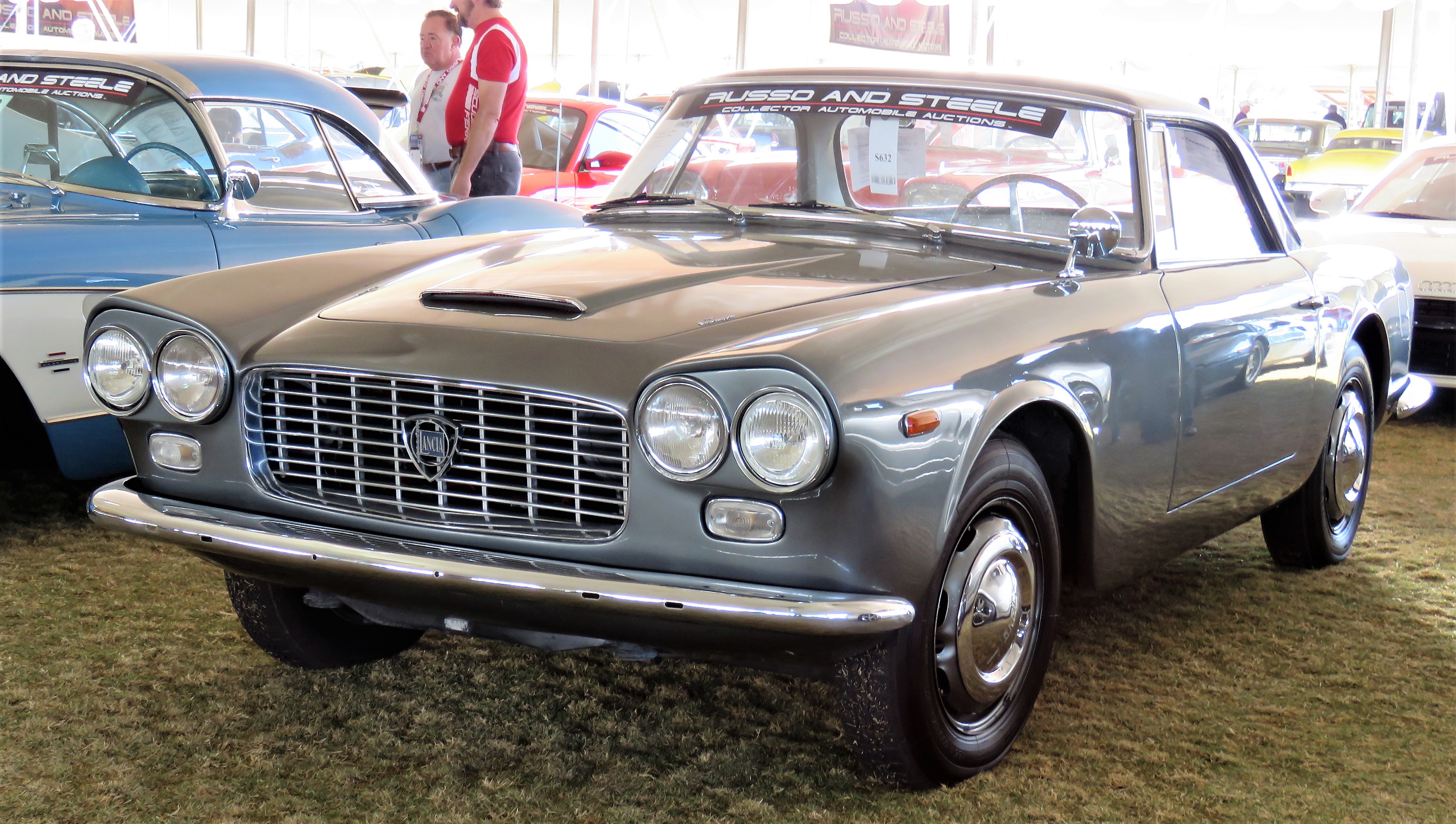 This is a fairly rare model featuring bodywork by Touring, and it looks very interesting in the mid-century style of Maseratis and Ferraris. Powered by one of Lancia’s sturdy narrow-angle V6 engines, this would be the perfect cruiser for arriving at an Italian festo just to say Ciao. 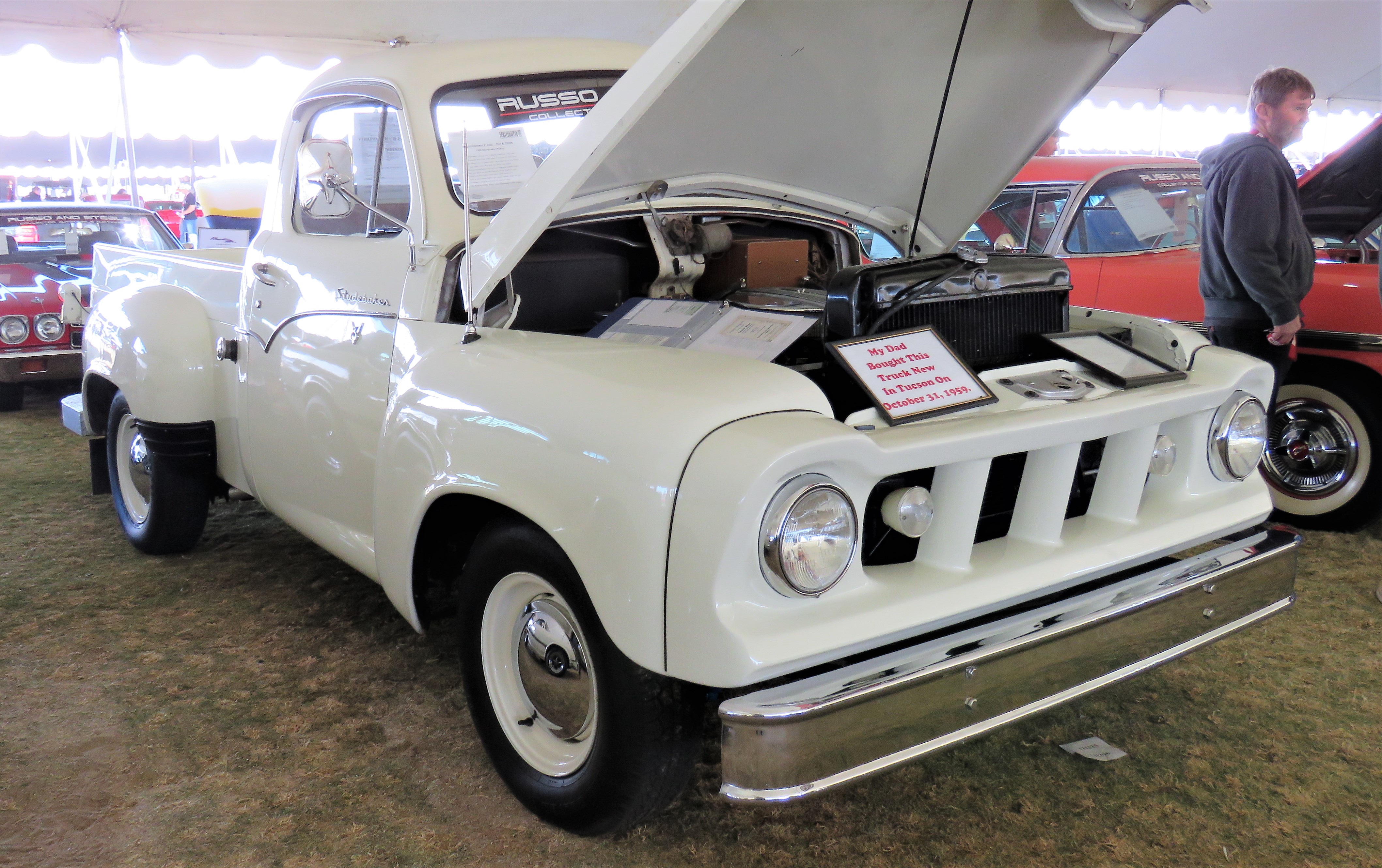 “My dad bought this truck new in Tucson on October 31, 1959,” reads the placard propped up on the nose of this gleaming white pickup. It looks to be in exceptionally well-loved condition. I like the styling of ’50s Studebaker trucks, which have a certain utilitarian flair. This one is well-equipped with a V8 engine (the description says it’s a “new Studebaker crate engine,” which seems odd since the company closed down many decades ago) and a three-speed transmission with overdrive for highway driving. 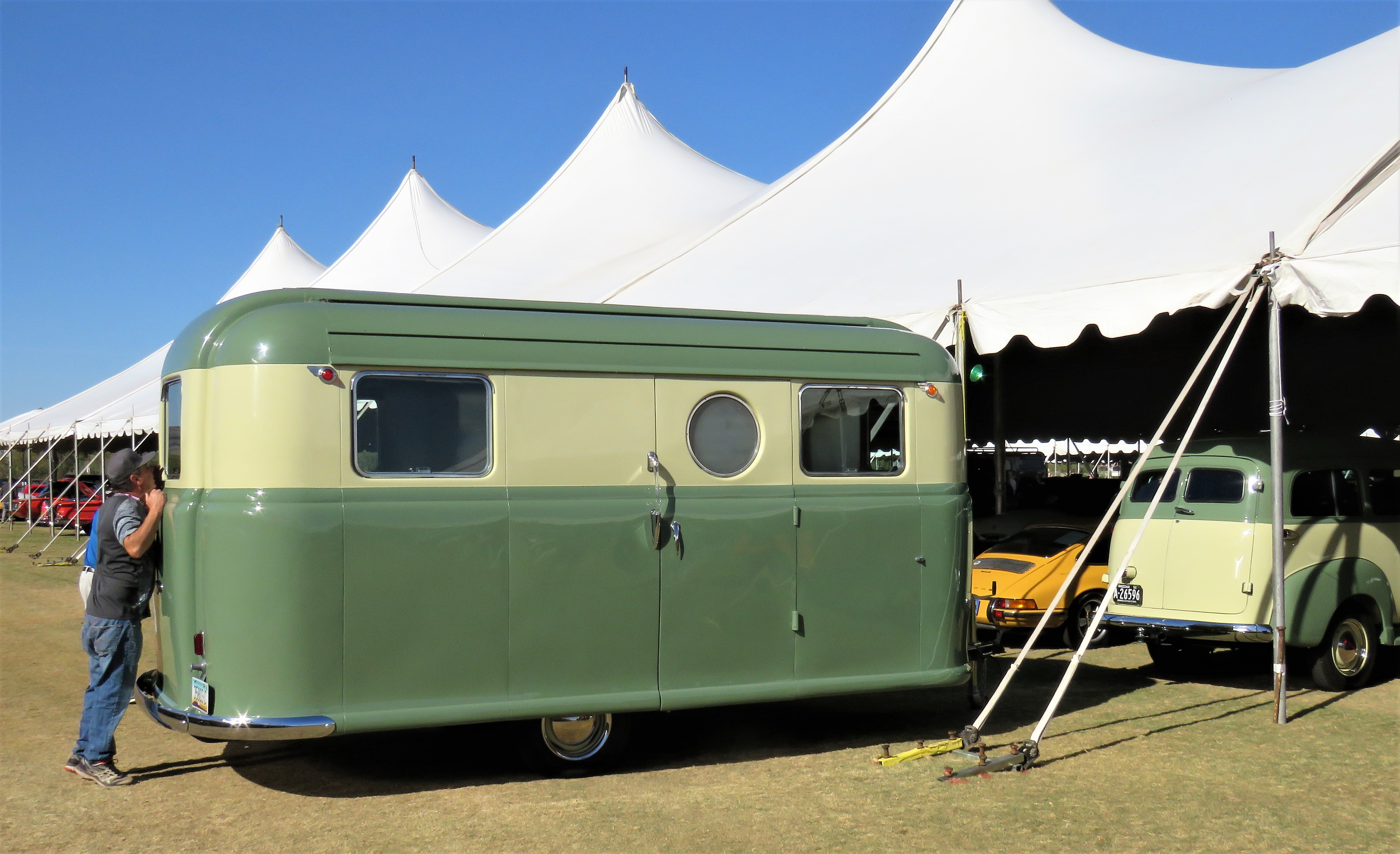 Here’s the ultimate vintage camper setup, a totally gorgeous Chevrolet SUV hitched to an equally gorgeous camping trailer in matching colors. The seller, who calls the massive trailer “every girl’s doll house,” says the truck and camper were meticulously restored to original. It’s a fabulous rig that attracted loads of attention, with most people standing on tiptoes to peer in the camper’s windows.

No, I’m not considering this strange “artwork” as something to buy, just thought you folks might like to see one of strangest custom critters on the planet. What is it? Who knows?