Its location a closely kept secret for decades, the 1968 Ford Mustang GT that was the “hero” car in the movie Bullitt was displayed Sunday evening at the North American International Auto Show in Detroit, where it took part in the unveiling of the new and 50th anniversary 2019 Bullitt Mustang.

After its use in the making of the movie, where it was driven by Steve McQueen, the car had been purchased in 1974 by Robert Kieman, and became the family driver until being put away in secret storage.

The car was inherited in 2014 by Sean Kieman, Robert Kieman’s son. Sean contacted Ford and worked with the car company for the joint unveiling.

Recently at the Ford Design Studio, Steve McQueen’s granddaughter, Molly, was introduced to the “hero” car.

“You know, it was never our intention to keep this car a secret from everybody,” Sean Kieman was quoted in a Ford news release. “It just kind of happened with life.

“I’m just completely buzzing to join with Ford and the new Bullitt and show this car to the world on one of the biggest stages there is.”

Two identical Mustangs were used in the filming of the movie that starred Steve McQueen. The car the Kieman’s purchased was the “hero” car, the car driven by McQueen in the filming of regular driving. The other car was the “jump” car, Mustang serial No. 8R02S125558, which was re-discovered last year in Mexico.

The 2019 Bullitt Mustang is to be available in dealers’ showrooms this summer, powered by a 5.0-liter V8 engine that is linked to a manual transmission manipulated by a white cue-ball shift knob.

“This new Bullitt is, as Steve McQueen was, effortlessly cool,” Darrell Behmer, Mustang chief designer, is quoted in the Ford news release. “As a designer, it’s my favorite Mustang – devoid of stripes, spoilers and badges. It doesn’t need to scream about anything – it’s just cool.”

“When making a Bullitt, there are certain things it absolutely must have,” added Carl Widmann, Mustang chief engineer. “It has to have the right attitude, it has to be unique in some way from a Mustang GT, and more than anything, it has to be bad ass.”

In conjunction with the announcements at the Ford news conference, the Historic Vehicle Association announced that the 1968 Mustang Fastback, serial No. 8R02S125559, has become the 21st automobile on the National Historic Vehicle Register, which is a partnership between the HVA and the U.S. Department of the Interior, the Historic American Engineering Record, and the archives of the Library of Congress.

“The 1968 Ford Mustang Fastback (“Bullitt”) is associated with one of the most epic stars in film history and an automotive chase scene that helped propel McQueen to perpetual stardom,” said HVA president Mark Gessler.

“This was the moment when McQueen became “the king of cool.”

“It was the first movie he created on his own and had all the signature qualities for which he aspired. He played an understated cop, fighting the good fight, against all odds.  What he needed was a car to complete his image to enhance his persona.  The 1968 Ford Mustang Fastback was just that car.”

“From our vantage point it is among the most important automotive artifacts of the twentieth century.  It has the incredible combination of Hollywood royalty and decades of an honest family’s ownership and the secret that engulfed its mystery.

“As it is revealed today, it marks a moment on this 50th anniversary for America to look back at a time when McQueen and a 1968 Mustang Fastback could captivate popular culture.”

In another news release, this one from Hagerty insurance, collector car expert and insurance executive McKeel Hagerty said, “The rediscovery of the Bullitt Mustang is huge in the car world. Many people consider the chase scene featuring it to be one of the best, if not the best, car chase scenes of all time.

“The mystery of where it’s been for 40 years only adds to its allure. There were only two Mustangs used for filming, and this was the one actually driven by Steve McQueen, the ‘King of Cool.’ Everyone probably assumed it was gone for good, and now it turns up in mostly unrestored condition, modifications made for filming, and with the original interior, including the seats McQueen himself sat in. That’s remarkable.”\

The HVA quoted Sean Kieman noting that the car has been subject of “rumors, Myths and dead-end searches” for many decades.

“These stories evolved and took on a life of their own and the car became something of a holy grail in the old car world — waiting to be rediscovered,” he said. “Today we revealed the car to the general public and it is pretty much the way my parents bought it back in 1974.” 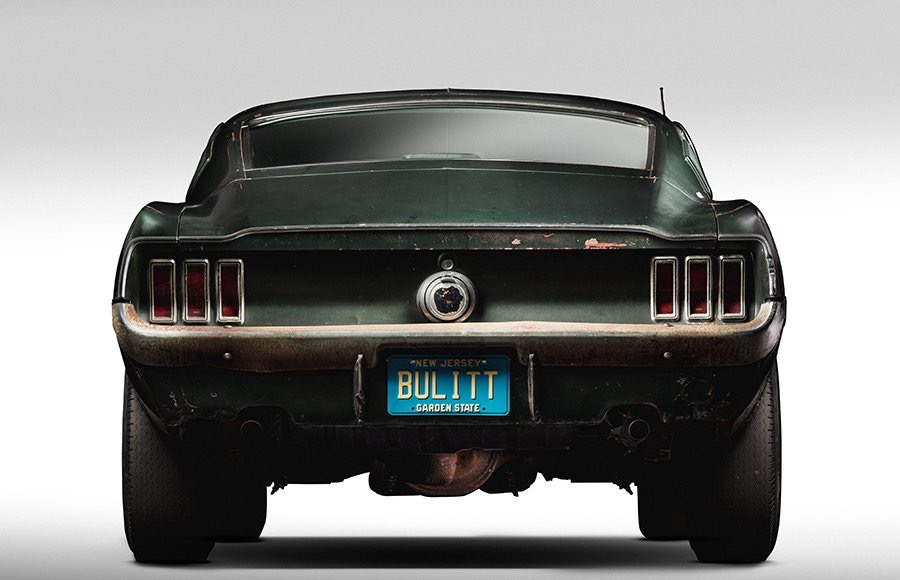 He said his parents bought the car based on an advertisement for it in the October 1974 issue of Road & Track magazine. The ad was placed by the car’s owner, a New Jersey detective named Frank (Marranca), just like McQueen’s character in the movie as Frank Bullitt.

“We’re not exactly sure how much my dad paid, but it was around six grand,” Kieman is quoted. “It was quite a bit of money back then for used ’68 Mustang Fastback. In fact, it was about twice to four times the going rate.”

Kieman said his parents both were 26 years old at the time. His father took a commuter train from their home in Madison, New Jersey, to New York City for his job in the insurance business and his mother, Robbie, who taught third grade at the St. Vincent’s parish school, drove the Mustang.

“God only knows what those kids must have thought,” Kieman said. “Mo must have been pretty cool.”

The car had a straight exhaust and no sound insulation, which had been removed by the movie production crew. When the Kiemans bought the car, they found the rear seat belts hidden beneath gaffer’s tape.

“In 1977 my dad got a call from Steve McQueen. Steve had tracked down the prior owner, who gave him our phone number. McQueen wanted the car. He was a guy that was not used to hearing the word ‘no.’ But my dad told him, ‘no thanks, we are not interested in selling’.

“McQueen followed up with a letter reiterating his interest, saying he wanted the car back and offered a trade or something as long as it wasn’t ‘too much monies.’ Dad never answered that letter, Bullitt was part of our family.”

Sean said he and his father had plans to restore the car after its long storage. After his father’s death, he rebuilt the engine, replaced the aging carpets, and added a new steering wheel, though similar to the one used in the movie.

He said the car was repainted soon after the filming, in part to hide damage that had occurred during the making of the movie.

He also said the front bumper and valance were replaced in the 1970s after his grandfather backed his car into the Mustang.

The HVA is working with the Kieman family to take the 559 Bullitt Mustang on a national tour.

Pick of the Day: Will 1971 Husqvarna 250 gain from Steve McQueen Effect?