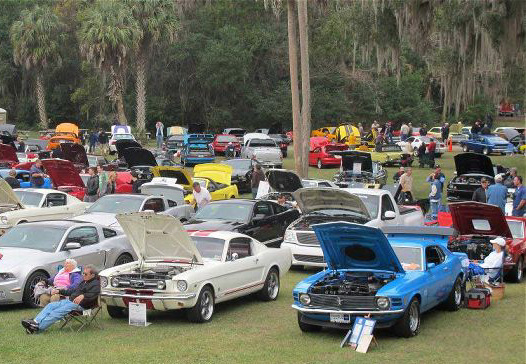 Ocala, Florida probably doesn’t ring a bell with most people, but Ford fans know Ocala as home to the Silver Springs Ford and Mustang Roundup. Kicking off the new year for more than two decades, this annual show has drawn a veritable army of Fords from all over the country to the swamps of Silver Springs State Park.

The setting and overall essence of the Roundup is unconventional for a car show, but it’s by design. National Parts Depot, the show organizers, decided long ago that they would follow their own rules and etiquette; and that this event would focus on two things: Fords and fun.

“Roundup is where people unite under a single cause, which is to have a good time,” said Derrick Putnam, National Parts Depot project manager.

The laid back atmosphere, live music, food and family activities are what distinguish the Silver Springs Roundup. It removes the focus from winning and emphasizes camaraderie. This is partly the reason why the Roundup is the largest Ford gathering in the nation.

“We don’t crowd all the Mustangs in one part, and all the trucks in another. If two buddies want to show together, we let that happen, regardless of what their driving,” said Putnam.

The 24th and final Ford and Mustang Roundup is scheduled for this Saturday, January 13. Ford fans will certainly be mourning the loss of this beloved show, but National Parts Depot is making sure Roundup will live on as a cherished memory after Saturday.

A festival of Fords in Florida