In 1957, the U.S. auto market was awash in innovation and design. The Big Three had people flocking to showrooms to see their newest offerings and a little Swedish company decided it wanted to try its hand at coaxing some of those excited buyers towards an offbeat, 3-cylinder, 2-stroke sedan designed by aircraft engineers. After all, what could it hurt?

The company, Saab (an acronym for Svenska Aeroplan Aktiebolaget), managed to sell 1,410 of the odd-looking little vehicles that first year from a lone distributorship in New York state, but the journey began, and an enthusiastic base of Saab enthusiasts followed.

Tom Donney was barely out of diapers when those first Saabs arrived at the New York dock and his introduction didn’t fully take place until he was 13 and wanted the opportunity to take two family Saabs (a ’63 and ’64) that were languishing in the backyard and create a drivable car he could pilot around tiny Carson, Iowa.

Opportunity led to obsession. Today, Tom and his wife Patti own some 150 examples of the brand, including that first pair he used to create his first cruiser.

But let’s not jump too far ahead. As Donney explains it, to drive a Saab meant learning everything he could about repairing the car, and by the time he was 16 he had was working at World Wide Imports, an Omaha, Nebraska, Saab, Fiat, Lotus and Suzuki dealership, where he was mentored by Ray Pharcher, who eventually became well known among the Saab faithful as a go-to source for all things Saab.

The young mechanic absorbed everything he could from the dealership experience and went on to get a two-year automotive degree from Iowa Central Community College. Donney describes those years as a struggle as he worked with various shops in the local area but decided (with $25 in his pocket) to start his own operation. Fort Dodge Transmissions was born from the hard work of both Tom and Patti and children.

“It gave us a decent living,” Donney said, and allowed the couple to devote time to those beloved Saabs.

The ensuing years brought more business to Fort Dodge Transmissions and eventually the formation of Tom Donney Motors, where the couple began to build a collection of the quirky vehicles and establish their own reputation as Saab experts. In addition to hanging onto the original two Saabs that began the saga, the Donneys started acquiring Saabs of all vintages and models, the oldest being a 1950 92 that was driven all over the U.S. by the late Larry Williams.

Of course, during these years, Saab was changing. The company launched the luxury compact Saab 900 in the late 1970s and produced that platform until 1998. It was the first vehicle with factory-installed seat belts (1958) and introduced a diagonally divided brake system with double brake circuits in 1964, far ahead of any domestic auto producer.

The brand was innovative, particularly when it came to safety and was always in the top 10 vehicles for safety ratings right up until its demise in 2014.

The Donneys weren’t distracted by Saab’s financial struggles, however. They continued to search out the best examples of the marque, sometimes having vehicles shipped from European owners. Saab was restructured as a company in 1989 and General Motors acquired a 50 percent stake. In 2000, Saab was a wholly owned GM subsidiary.

GM sold Saab 10 years later to Dutch automaker Spyker, but later tried to block Spyker’s effort to sell Saab to a Chinese company. A new company, National Electric Vehicle Sweden, was formed in 2012, but lost its license in 2014. Saab EVs are now produced under a Chinese manufacturing agreement.

Saab’s heritage is celebrated at the Saab Car Museum in Trollhättan, Sweden, with a 120-car collection located in one of the former Saab factory buildings.

In North America, there were 10 vehicles in a Saab Cars Heritage Collection. Five were purchased by the Donneys and the other five by another Saab enthusiast, Bill Jacobson.

Thus the Donneys came to own what likely is the largest vintage Saab collection in the world and plan to establish a Saab museum in Sturgis, South Dakota, which annually hosts thousands of motorcycle riders during a huge bike week gathering. They hope to open the museum sometime in 2018.

But why in Sturgis? Well, Tom Donney helped coach the Black Hills State University football team from 1990 to 2014 and his travels from Fort dodge to Spearfish took him through Sturgis, which he figured would be a great place for a museum featuring quirky Swedish vehicles.

The Donneys have purchased a 28,000-square foot building sitting on seven acres of land that formerly housed a lumber yard and later an auto dealership. The site sits directly off Interstate 90 (exit 32) and couldn’t be any easier to access for travelers exploring the glorious Black Hills. 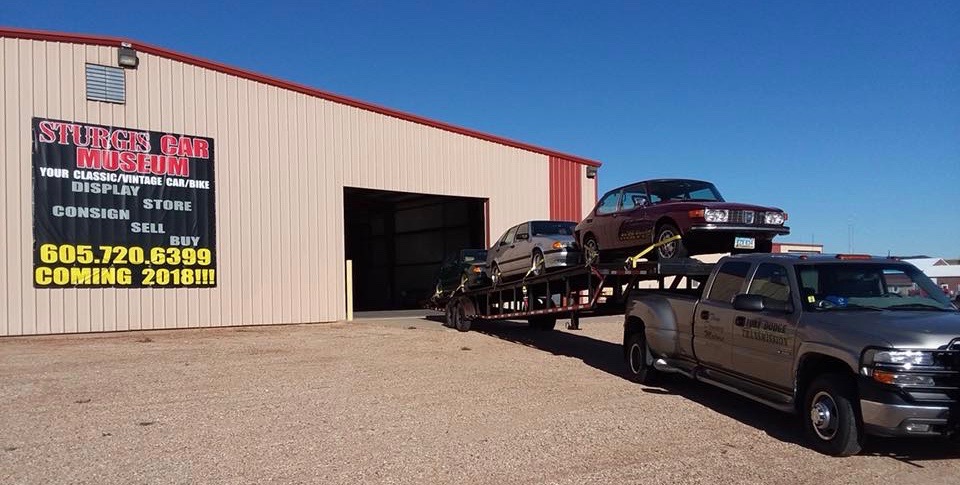 They plan to use half of the building to display cars and the other half for restoration and repair services. They also may offer Saab rentals as way to introduce people to the cars.

“We want to attract all types of automotive enthusiasts,” Tom Donney said, “so we’ll be including some other vintage vehicles in addition to the Saab brand.”

Plans also include a current parts sales business that will bring even more parts availability to Saab enthusiasts worldwide through a partnership with eSaabParts.com. For many years, the Donneys have made available parts they’ve been able to find to repair most any Saab built, and they feel the demand will continue to be strong for Saab vehicles.

Jim Volgarino
At age 12, Jim Volgarino peeked under the hood of his grandfather’s 1957 Oldsmobile and saw a Rocket 88 for the first time. He was hooked. Following stints in the Air Force, the newspaper business, the printing business, and the teaching business he’s finally settled into his first love… automotive writing. He’s covered everything from Bonneville Speed Week to the Lambrecht Chevrolet auction in Pierce, Nebraska, from his home in Cedar Falls, Iowa. He’s owned pretty much anything and everything with a motor and wheels. Currently, he’s restoring a 1964 Chevrolet Impala SS 409.