The little (Lexus) engine that could

How much horsepower is enough? Carroll Shelby once told me it was 170, a figure he based on observation and research into what it took to propel a car and its occupants down the road at reasonably enjoyable speeds. You figured Ol’ Shel’ would know. Although, with his next breath, he said he and his crew were working on an engine with 1,000 horsepower to cram under the hood of a Ford Mustang.

And don’t forget, it was Shelby who found a way to shoehorn a Ford V8 into the engine bay of a small British sports car to create the Cobra, a venomous vehicle that clobbered Corvette and embarrassed Enzo. 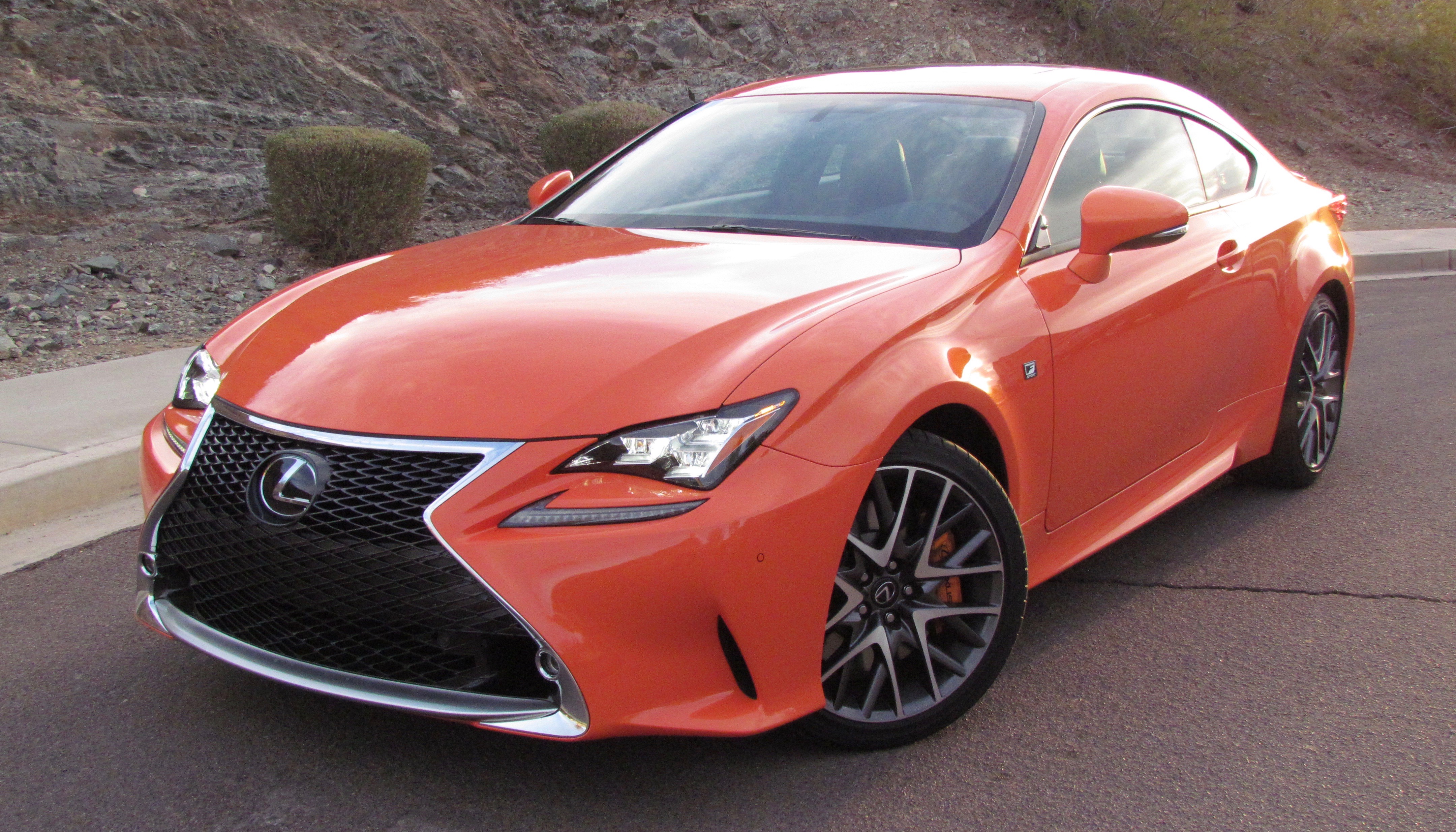 As Shelby showed us, big things could come in little packages. And they still do. Case in point, the 2.0-liter turbocharged engines that have propelled the vehicles I’ve been driving for the last two weeks.

Officially the 8AR-FTS, the engines are 4-cylinder units with their respiration boosted by intercooled, twin-scroll turbochargers.

Turbocharging a four-banger is nothing new, but these engines are in Lexus vehicles. The engines not only breathe through valvetrain operated by dual-overhead camshafts with dual variable valve timing, but feature “intelligence-wide” technology, which Lexus says allows the engines to switch between traditional Otto and fuel-conserving Atkinson cycles.

Another technological enhancement is what Lexus terms D-4ST direct injection which splits fuel delivery between high-pressure direct injectors and low-pressure ports, according to engine load. 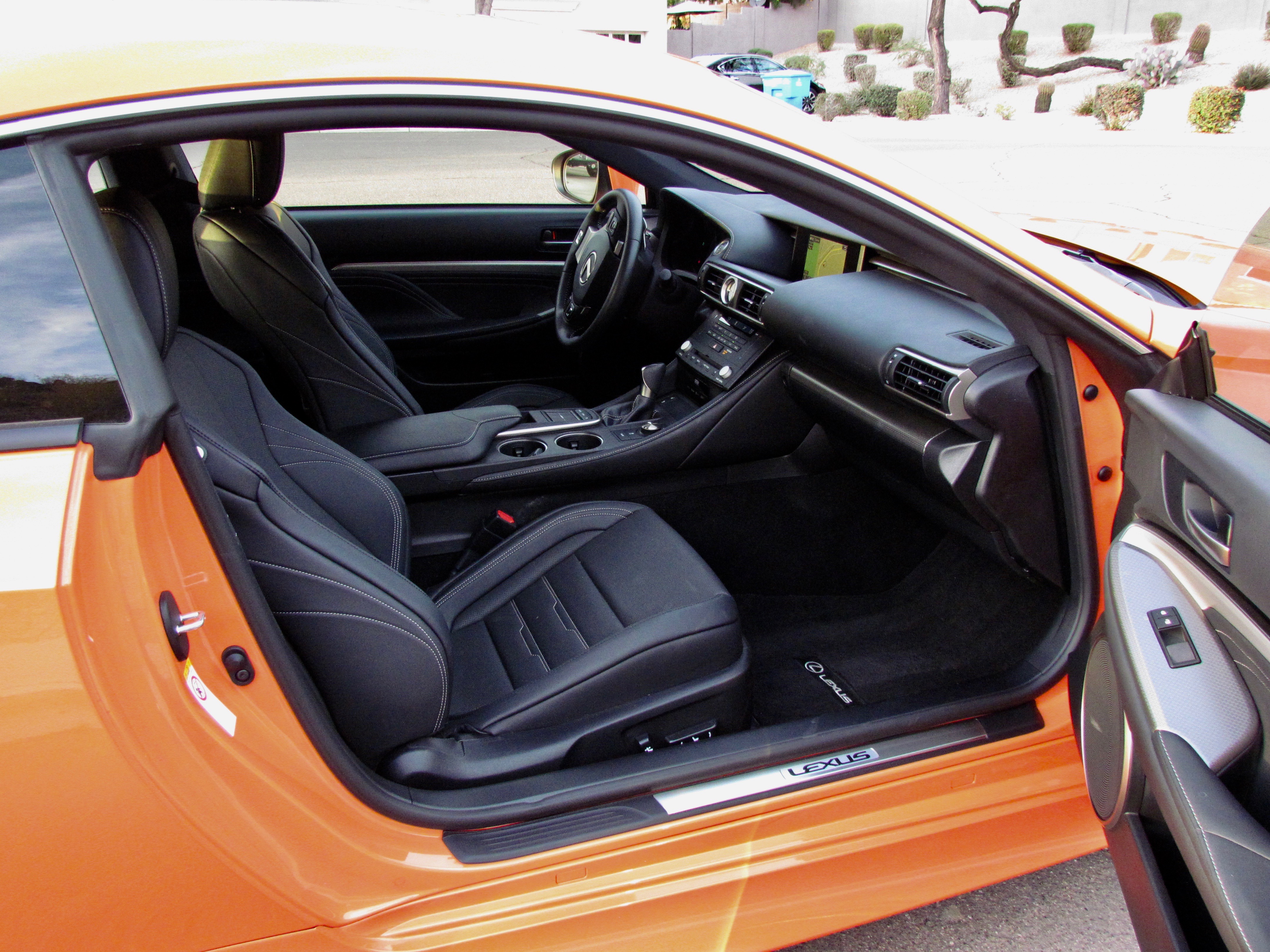 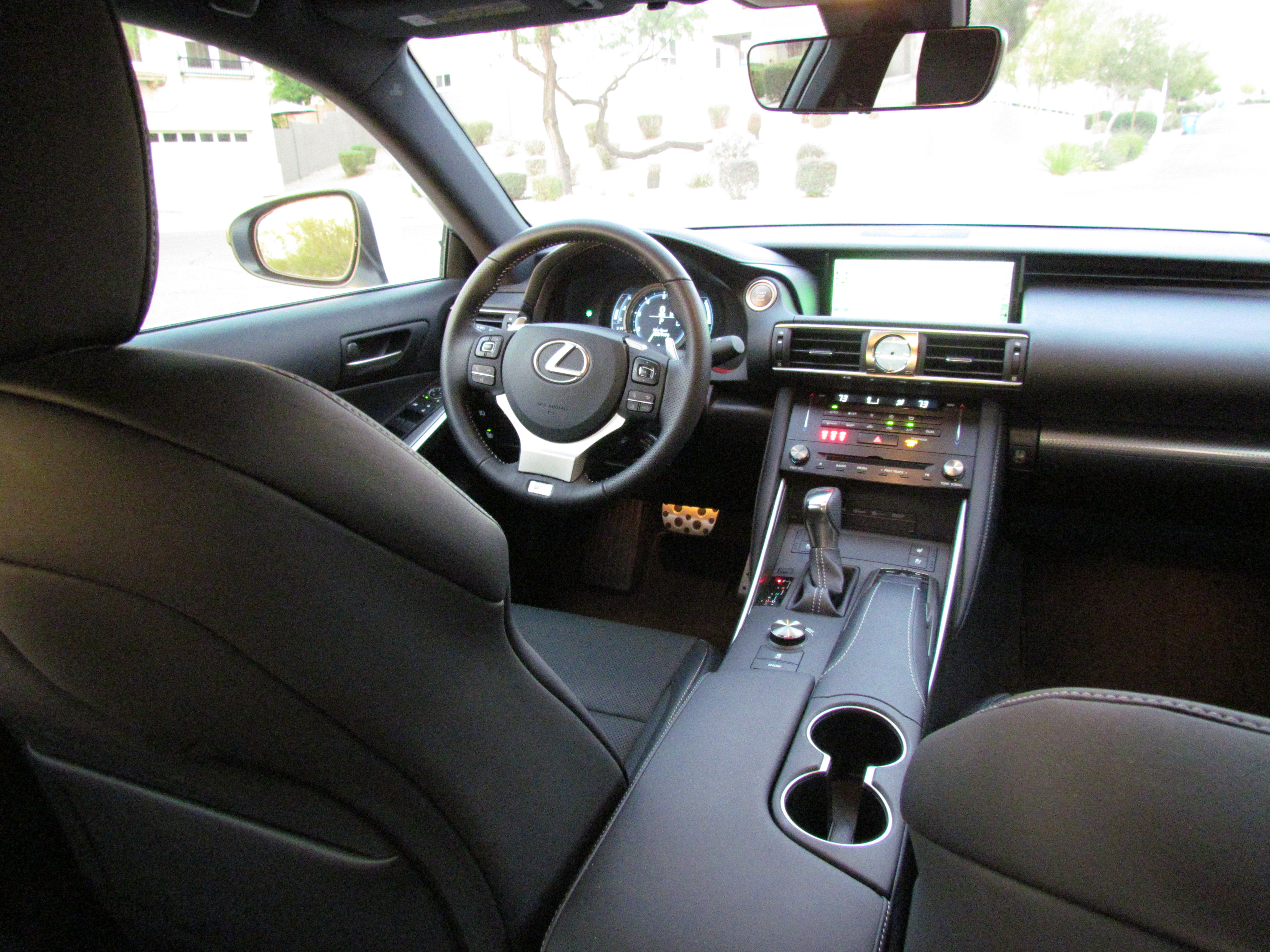 Think in terms of having your cake and eating it too. Yes, the engine wants to burn premium fuel, but in return it pumps out 241 horsepower and, under load, 258 pound-feet of torque, with a torque plateau rather than a peak and spanning all the way from 1,650 rpm to 4,400.

And yet, the engine gets Low-Emission III/Ultra-Low certification and, in a compact IS sedan, is rated at 22 mpg in town and at 32 on the highway.

Or you can forget the numbers, turn the switch on the center console to Sport mode and have a blast driving a compact vehicle that has its engine up front and its drive wheels in the back, just as an automotive deity like Shelby would want them.

Yes, Shelby would want a manually shifted transmission, but the 8-speed multi-mode automatic in the 2017 IS 200t is pretty responsive and offers paddle shifters on the steering wheel if you choose to use them.

Front suspension is double wishbone with multilink geometry at the rear. Both ends get stabilizer bars and in the car we tested, F Sport option tweaks. Front brakes are 13.15 inches in diameter and both front and rear have ventilated rotors. Standard wheels are 17 inches but the F Sport package bumps that to 18s, with the rears a half-inch wider than the fronts and with high-performance summer rubber on all four corners.

And while this is a Lexus that comes with contemporary nanny technology, Lexus does it right. For example, instead of trying to steer you back into your lane should you venture over near the stripe that defines you portion of the road, all you get is a little vibration in the steering wheel. No audible arguments or robot-knows-best steering input. Hey, this engine is cool and I want to clip apexes. Bad enough with a backseat driver, I don’t need one up front with cameras and such as well.

I had the opportunity to try the turbo-4 not only in the IS sedan but also in the 2017 RC200t coupe. Strange, thing, however. While the coupe looks better, in part because of its Molten Pearl orange color, it wasn’t as much fun to drive, which makes no sense until you dig down into the specifications charts.

While the sedan with two extra doors and window motors, etc., weighs in at 3,583 pounds, the coupe is actually heavier, at 3,737 pounds, according to Toyota’s specifications sheet. And that’s in base trim. The one I was driving was packed with around $11,000 in optional equipment, which figures to add even more weight for the turbo-4 to pull around. 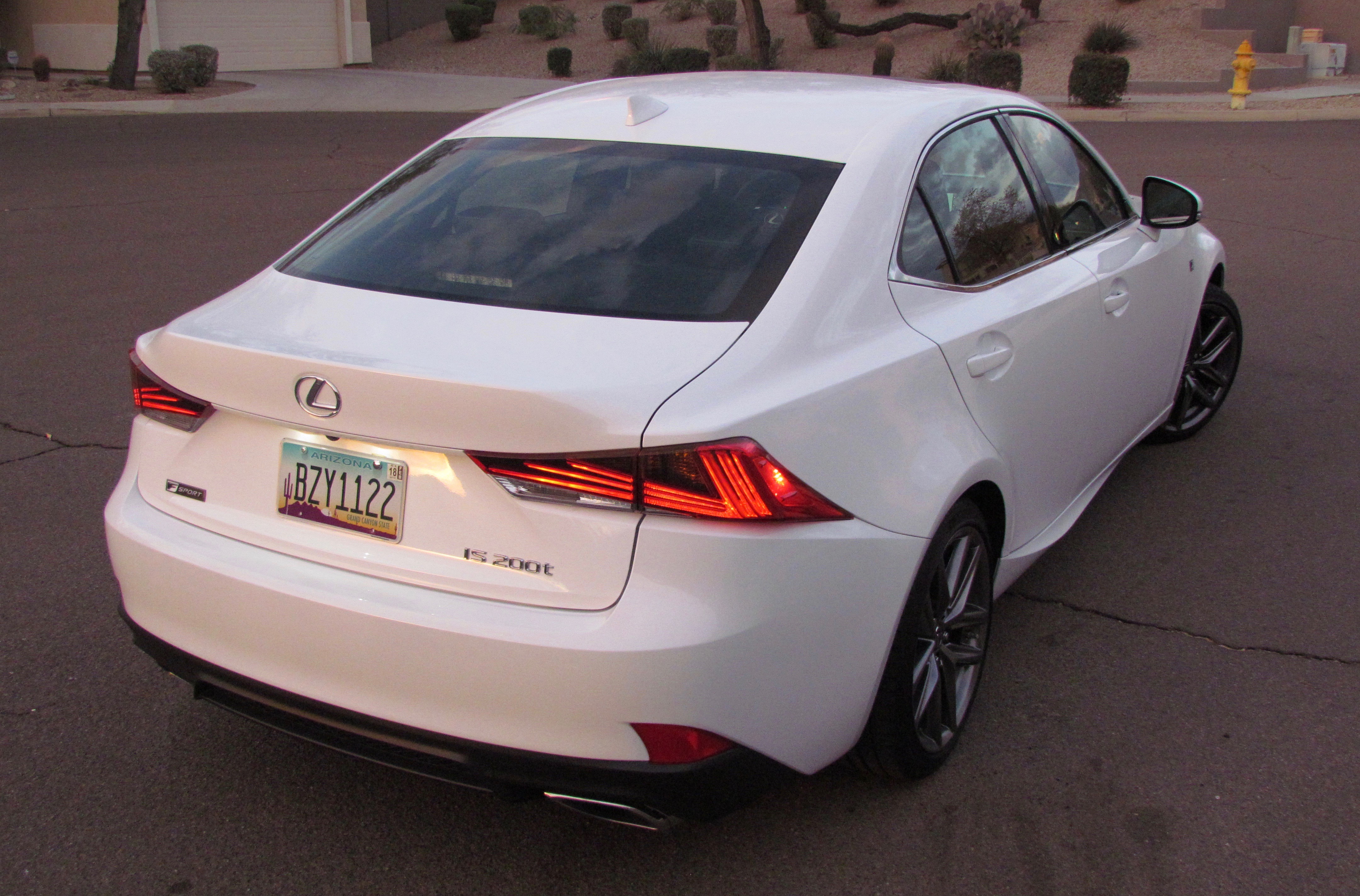 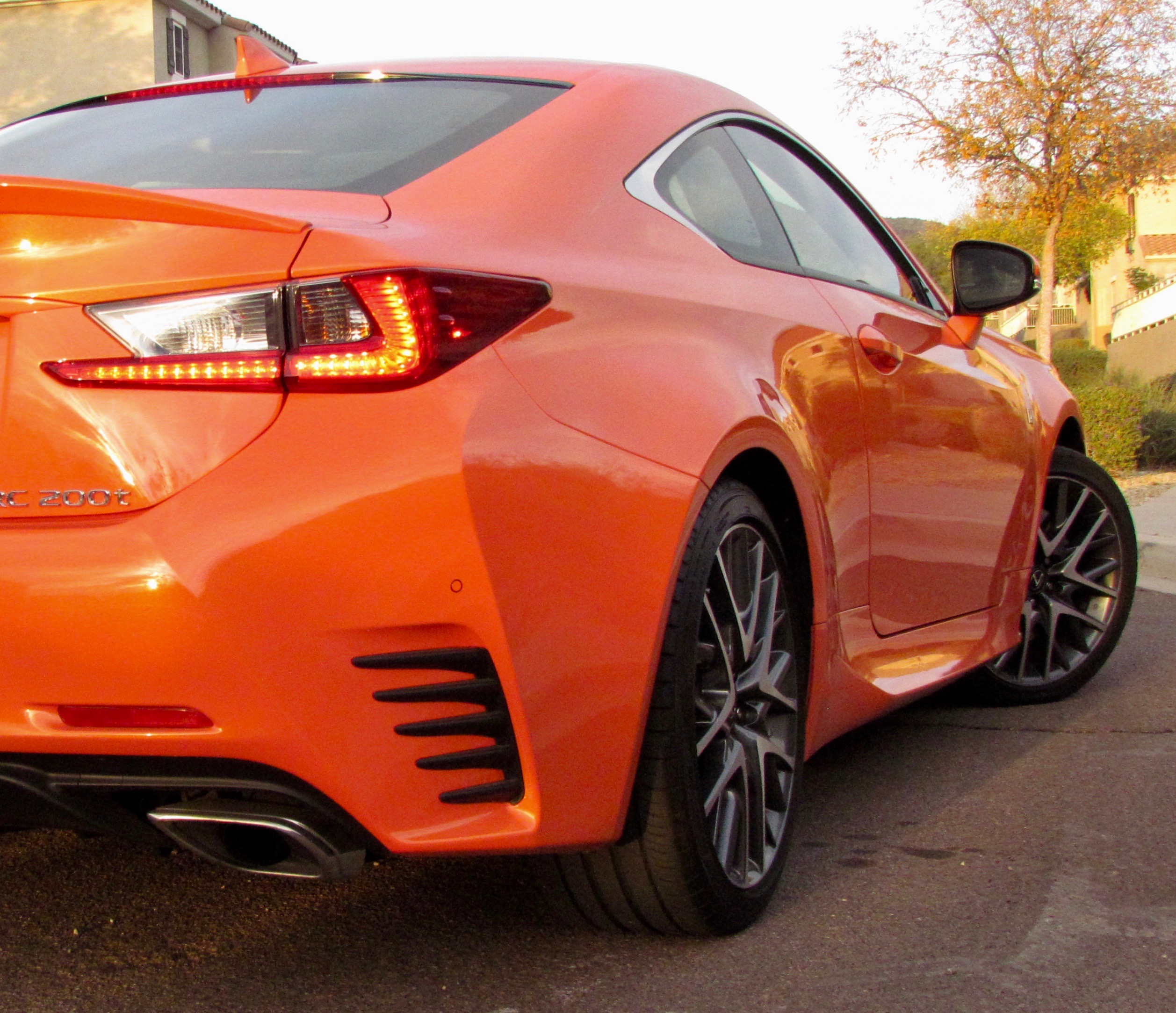 Maybe it was the coupe’s sleeker shape or sexier color, but I also found myself wishing that the car came with a manual shifter, which certainly would have helped with the fun factor, and maybe kept me busy enough that I didn’t notice that the two-door felt heavier than the four.