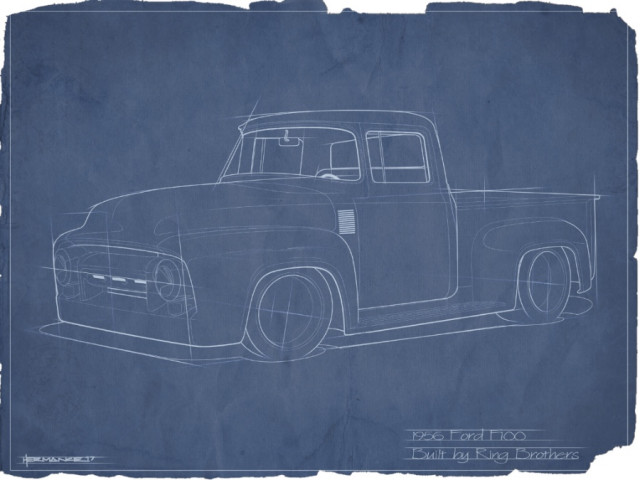 Ringbrothers will return to the SEMA show this November with another custom creation. Following last year’s multiple debuts, which included the G-Code Camaro, Cadillac Madam-V, and more, the custom car shop announced plans to reveal a 1956 Ford F-100 pickup truck.

Ringbrothers calls it “Clem 101” and it will benefit from a familiar (read: awesome) formula. Like many of its other builds, the 1956 F-100 will blend modern technology and design with old-school looks. The company says it will ride on a boxed frame built from scratch and boast a modern suspension setup. Under the hood, Ringbrothers plans to stuff a 5.0-liter Coyote V-8 crate engine. No word on power or other specifications just yet, though.

From the sound of it, Clem 101 will be a restomod with a very modern twist. Wider rear fenders, a Flowmaster exhaust system are part of the build, and from the looks of it, the truck will ride quite low to the ground. Finally, Ringbrothers says a coat of “Speedy P Green” paint will coat the exterior, selected from BASF’s Glasurit line.

The list of notable SEMA concepts planned for this year’s show is growing already, but the aftermarket community always stops and listens when Ringbrothers has something to show. The company will reveal the 1956 F-100 on November 1 at the Ringbrothers booth.

I wasn’t ready: My first time at the SEMA Show in Las Vegas