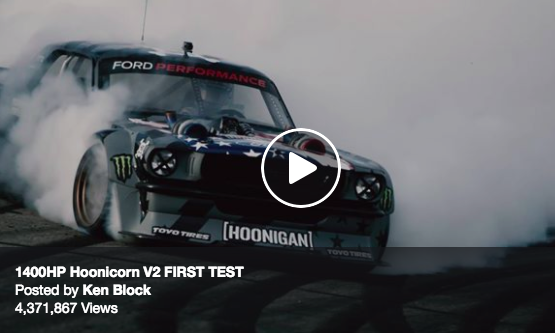 Horsepower is a dangerous thing. Fast may be fun, but it can also be pretty darn scary. 1,400 horsepower? That’s “frightening,” according to Ken Block.

The star rally driver used the adjective to describe his Hoonicorn, which is based on a vintage Ford Mustang body. In conjunction with his upcoming Climbkhana at Colorado’s Pikes Peak, the team installed a few power upgrades to the Hoonicorn, which included a twin-turbo system that provides 21 psi of boost. Said boost is then fed to a 6.7-liter V-8 engine running on methanol for the grand total of 1,400 hp. Previously, the Hoonicorn was making around 850 hp, Block says.

Block said the amount of power on tap is “bizarre” since he has to shift through gears so quickly and the Toyo Proxes R888R tires are always in the mood to spin as they seek traction. In fact, the extra 550 additional horsepowers are so substantial, Block says he needs to “relearn” the car. As he describes in the video, the steering and acceleration input he normally uses doesn’t play well with the newly-added performance upgrades.

Understanding how the more powerful Hoonicorn behaves is essential for Block to safely execute the wicked driving stunts that we will see in Climbkhana. One wrong input and Pikes Peak becomes a very scary place. Block reiterates the frightening amount of power one last time and says everything he’s learned about driving powerful, all-wheel drive cars has been thrown out of the window. Thankfully, it seems he’s tamed the Hoonicorn and Climbkhana should be a real treat.

What’s it like to drive the 1400 horsepower methanol-fed twin turbo Hoonicorn V2? Terrifying. And it takes a LOT for me to admit that! Ha. Check out my reaction to testing this beast for the first time ever, along with some great testing footage, in the video below.