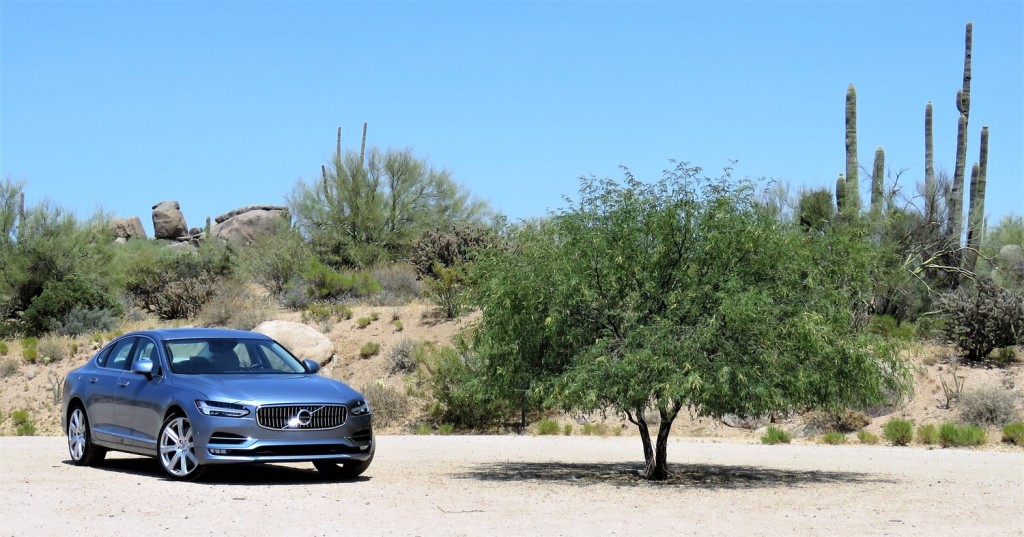 I was a Volvo fan back when they were boxy and quirky, and we had a couple of kids to cart around. The favorite was a funky 245 wagon, the ultimate brick on wheels, yet actually fun to drive, partly because of its four-speed manual transmission with electric overdrive, which activated with a “clunk.”

The all-new 2017 Volvo V90 Cross Country T6 wagon seems stunningly futuristic compared with our old Volvo 245 wagon of decades ago. Gone are the funk and the clunk, replaced by sleek styling, refined drivability and a brilliantly sophisticated interior dominated by a large, computer-tablet-like command center in the center of the dashboard.

The V90 wagon and the likewise-new S90 sedan, which I test-drove separately, are game changers for Volvo. First out of the box for Volvo’s redesigned lineup of flagship vehicles was the widely acclaimed 2016 XC90, followed for 2017 by the S90 and V90 , which introduced a whole new design language for Volvo.

This new generation of Volvos moves the technology clock forward a few ticks while further enhancing Scandinavian style. That inherent Swedishness is an important consideration for Volvo. Now that it is owned by Chinese automotive giant Geely, there was fear among the faithful that Volvo would somehow lose its heritage and unique style in the takeover process.

But everything from the refined wood trim to the unique simplicity of the dashboard and controls speak volumes about Volvo’s direction, and perhaps the direction of automobiles in general. Elegant and usable and wholly unlike anything else on the road. For now.

Volvo, always the innovator, shook up the automotive world last month when it announced plans to produce only electric or gas/electric hybrid cars and SUVs, starting with its 2019 new-vehicle launches. It was a bold statement, especially for a small player on the world stage, that shows once again that Volvo is savvy about the needs of the future, and of what people want.

Volvo already has demonstrated its mastery of technology on a number of fronts, with advanced safety systems to avoid collisions and protect occupants, and driver-assist features that bring their cars ever closer to driving themselves.

The newly minted S90 and V90 replace the largest cars in the lineup, totally redesigned and mounted on a new modular platform, with a brilliant new look, new engines and equipped with a host of technology and safety features. The V90’s slightly smaller dimensions than the S90 show the versatility of the new modular platform.

The S90 T6 Inscription that I drove was, like the V90 Cross Country, the top-of-the-line all-wheel-drive model. The interior accommodations of both are similar to that of the XC90 I drove last year. The most striking difference with these cars is the large tablet that serves as the control panel. There are few physical buttons or switches, which gives the dashboard an unusually clean look, with just about every driver control accessed through the video interface.

At first, the system seems daunting, the touch screen operated with jabs and swipes to get to the various screens and functions. Sort of like when you get a new computer and have to learn how the updated system operates. I had each of these cars for weeklong test sessions, and it didn’t take all that long to get comfortable with the operation. I was swiping like a millennial in no time.

What switches there are also have a unique look: The keyless engine start is operated by twisting a chrome knob, and the driver adjustment of performance modes – normal, sporty and thrifty – were accessed with a knurled roller set in the console. Definitely different.

Both the sedan and the wagon were T6 models powered by Volvo’s new 2.0-liter inline-4 that is both supercharged and turbocharged, for 316 horsepower and 295 pounds-feet of torque, linked with an eight-speed automatic transmission and all-wheel drive. The engine utilizes Start-Stop technology, essentially shutting off when the vehicle is standing still, a system increasingly favored by automakers to increase city fuel mileage.

The Volvos drive as well-tuned premium carsshould, with plenty of power and seamless performance. Not really sporty, even in the “sport” driving mode, they do have a tight precision that instills confidence on back roads and open highways. The ride is notably quiet and composed, with some tire thump on rough surfaces, though not objectionable.

With the S90 and V90, Volvo trots out a new styling ethos that breaks with the past. The design looks well-integrated with a smoother look to the front end, which includes Volvo’s signature grille badge and “Thor’s Hammer” running lights. The rear treatment seems not as distinctive, with an awkward design of the taillights in the sedan. The wagon retains the bold vertical taillights of previous Volvos.

The interiors are where these cars really stand out. These were top-drawer versions of the S90 and V90, and as such were trimmed in leather and that gorgeous wood, light-colored in the test sedan, darker in the wagon. In usual Volvo practice, the seats are splendidly comfortable and supportive, and adjustable a zillion different ways.

The Inscription options in the sedan and the Cross Country upgrades in the wagon present a suite of convenience and safety features to the already well-equipped Volvos. Both cars had optional Bowers and Wilkins Premium Sound, which was amazing and included a concert-hall setting that really rang. Oddly, the system was quite a bit more expensive in the wagon, $3,300, than the sedan, $2,650. Extra speakers in the wagon, perhaps?

Of course, advanced safety features are cutting edge, including low-speed collision protection that applies the brakes; pedestrian, cyclist and large animal detection; Pilot Assist, which provides semi-autonomous driving on the highway; protection from running off the road; heads-up display with road-sign information; lane-departure warning; and the list goes on.

The S90 and V90 are fairly pricey, especially the loaded-up versions tested here, but they seem to offer a lot of style, quality, safety and accommodations for the money. And the Swedish company’s latest efforts confirm that Volvo is still ahead of the curve.