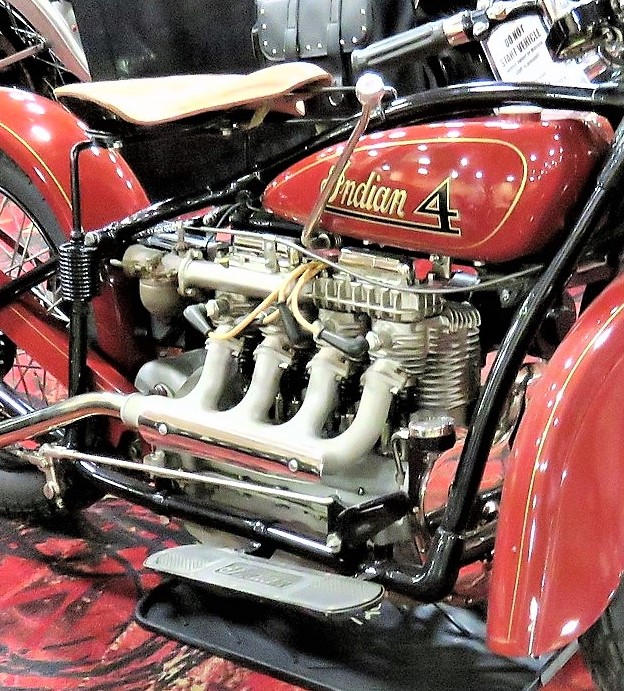 The Mecum motorcycle auction rolled into Las Vegas last weekend for the second time this year, adding the sale of about 400 vintage bikes to the nearly 1,000 that crossed the block in January. This was the first spring Vegas motorcycle auction for Mecum, and with $4.4 million in sales (not including auction fees) and an 80 percent sell-through rate, it most likely won’t be the last.

A 1969 Triumph Bonneville on the auction stage

The auction, held at the South Point Hotel and Casino a few miles south of the famous Las Vegas strip, was a laid-back affair as befitting a roomful of motorcyclists gathered among such a cool collection of classic bikes. The motorcycle offerings and the auction arena were all contained within a huge conference hall.

Meanwhile, the adjacent arena where Mecum’s larger January bike sale is held was busy with another kind of horsepower: rodeo-style barrel racing by teen-age girls on spirited steeds. In the connecting hallway, the scent of the horses mixed with the gear-oil smell of the vintage motorcycles.

The docket of bikes for sale was dominated by a colorful selection of sporty Triumphs from England, including those from an apparently massive motorcycle collection owned by brothers Mark and Randy Zimmerman of Simi Valley, California, who were thinning the herd with the sale of about 100 of their motorcycles.

Among the Zimmerman offerings were four Husqvarna motocross bikes that had been owned and ridden by Hollywood stars Steve McQueen, Charles Bronson, Lee Marvin and James Coburn. One of McQueen’s old Huskies was covered with dirt, presumably from the late actor’s last ride. None of those dirt bikes made reserve and were not sold, even though the dirty McQueen bike reached the heady bid of $90,000.

Bidding was active on a 1941 Harley-Davidson WL45

Vintage Harley-Davidsons and Indians looked like pieces of mechanical sculpture as they leaned on their side-mounted kickstands. A very handsome 1950 Harley E61, so-named because of its 61-cubic-inch V-twin engine, caught the attention of potential bidders Terry Gambill and Clara Baker of Las Vegas, who pored over the blue beauty with a flashlight while taking notes.

“We collect panheads,” Gambill said, in reference to the Harley’s V-twin engine type. “My wife and I are both mechanics, and we’re always looking for projects.”

When asked whether they were considering buying this panhead, Baker said pragmatically, “It depends on what it sells for.”

The Harley, which was offered at no reserve, sold the next day for $13,000 (plus buyer fee), although it was not clear whether Gambill and Baker were the winning bidders.

Another Harley enthusiast watching the auction was George Barnard, a volunteer rep who was manning a sales and literature table for the National Motorcycle Museum of Anamosa, Iowa. Barnard said he travels to motorcycle events around the country to make people aware of what he called “the best motorcycle museum in the country.”

“There are more than 450 bikes on display,” Barnard added. “We filled an old Walmart building.”

A 1950 VIncent Black Shadow was the auction’s top seller

The top-selling motorcycles at the auction were a pair of British thoroughbreds from Vincent, a 1950 Black Shadow that went for $95,000 and a 1951 Rapide that sold for $85,000 (Mecum auction results do not include buyer fees).

Although the top sellers commanded strong prices, there were lots of modestly priced classic bikes as well that sold in the four-figure range. That’s part of the reason vintage motorcycles are rising in popularity among classic automobile collectors: they are still relatively inexpensive to buy, they don’t take up too much space, they’re fun to ride, and many older bikes are as beautiful as fine artwork.

(Results do not include buyer’s premiums)

Mecum Auctions’ next motorcycle sale takes place Aug. 16-19 in conjunction with The Daytime Auction of collector cars in Monterey, California, with more than 50 vintage bikes expected. For information about upcoming sales and complete results from the Las Vegas spring motorcycle auction, visit the Mecum website.