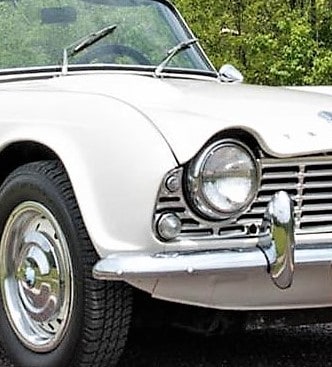 The early Triumph TR4 appears to be in excellent condition

The values of certain cars in the classic car hobby don’t always make a lot of sense.

Take, for instance, the Triumph TR4. The most valuable TR4 roadsters are the later TR4A cars that have independent rear suspension. On the surface, this would make sense as you would think that having IRS would be an improvement over the earlier live-axle models.

The TR4 is a equipped with a live-axle rear

That assumption would be wrong as the IRS on the Triumph does not have enough travel to work as it should. The IRS models simply do not handle as well as the original live-axle cars. You might think that the difference is marginal, but the live-axle setup was so much better that Triumph racers Bob Tullius and Kas Kastner both drove cars with live axles – even though they were branded as TR4As – and won quite often.

The Pick of the Week is one of those first-series cars with the original live axle, a 1964 Triumph TR4 located in St. Louis, Missouri.

According to the dealer advertising the Triumph on ClassicCars.com, this car in Pure White paint with blue leather interior was owned by the same family for the past 24 years. The dealer describes the car as having great paint and a nice interior, a straight grille (they bend quite easily), and all trim in great condition including the taillight lenses.

The TR4 was designed by Giovanni Michelotti

The convertible top is in great condition, the seller says, as are all the window and door rubber, all interior panels and gauges. For some reason, the dealer neglects to include any interior pictures with the ad, but I went to the dealer’s website where pictures show a period-correct leather interior that appears to be at concours level.

The car is equipped with my favorite Triumph globe-logo hubcaps, it has the correct Lucas headlamps and a tonneau cover.

This looks like a nice example of a TR4, a car that seems to increase in value every month. This is probably due to the stunning styling by Giovanni Michelotti and the strong performance of the Triumph 2.2-liter engine under the hood, making the TR4 able to go from 0-60 in 10.5 seconds, and it has a top speed in excess of 110 mph.

The TR4 is to me the last of the great classic British roadsters, with a look that is serious and performance to match. In addition, the TR4 has tremendous racing pedigree, finishing first in class at the 12 hours of Sebring and many other races.

The TR4 is also one of the last examples of an accessible British roadster that still has a bit of potential upside in the future. The asking price of this Triumph is a reasonable $19,900 for a classic British sports car that is rarer than an MGB but not as pricey as a big Austin Healey or a Jaguar E-Type.