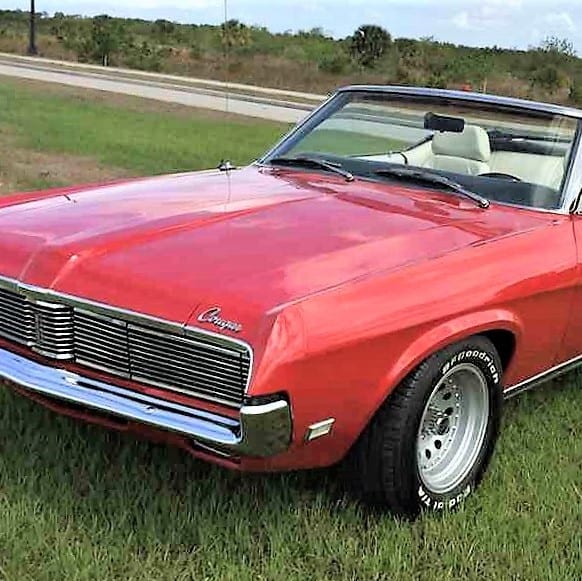 Mercury Cougar was Ford Mustang’s higher-achieving but less-successful sibling. Basically, it was a decked-out Mustang with suitable luxury trim and signature features – including hideaway headlights and sequential rear turn signals – for the more-upscale Mercury customers.

Cougar never reached Mustang’s level of sales, nor its iconic image, not by a long shot, which makes it rarer than the ubiquitous Ford pony cars, although generally not as valuable nor as high profile.

The Pick of the Day is an unusual 1969 Mercury Cougar convertible that has been enhanced with performance upgrades while essentially keeping its attractive luxury-car style; most often, Cougars are either restored to original or totally customized, but rarely are they given this subtle kind of hot rod treatment.

Advertised on ClassicCars.com by a private seller in Saint Lucie, Florida, the Cougar is described as a “one-of-a-kind standard convertible” powered by a rebuilt 351 cid V8 that’s been tweaked with 10.1:1 pistons, a competition cam with .528 lift, roller valve train, a Holley 750 double-pumper carburetor sitting on an Edelbrock Torker 2 intake, Mallory electronic ignition and Hooker headers. The horsepower is rated at 350, according to the seller.

The engine’s power is run through a 4-speed, close-ratio, top-loader manual transmission with Hurst shifter, and a 3.00 Traction Lock 9-inch rear.

The brakes are all new, the ad says, including drilled and slotted front rotors with ceramic pads, new rear-drum components, stainless-steel hydraulic lines, and a new brake booster and master cylinder. The suspension has been upgraded with urethane bushings and anti-sway bars, 1¼-inch up front and ¾ in back. The tires are new BF Goodrich T/A radials with raised white letters and mounted on custom wheels.

While the seller omits information about the condition of the paint, interior or fabric top, the car is described as “fully restored,” and it looks fresh in the photo gallery with the ad. Particularly important with these cars, the complex chrome grille with the hidden headlights and chrome trim in the rear look gleaming. The Cougar shows just 69,000 miles on its odometer, and appears to be ready to drive and enjoy.

The asking price of $24,000 seems modest enough considering the drivability upgrades and overall fine condition. This Cougar seems like it would be loads of fun to drive, especially with the addition of a manual transmission. Although any women considering a purchase should be prepped for the inevitable cougar jokes – not that there’s anything wrong with it.