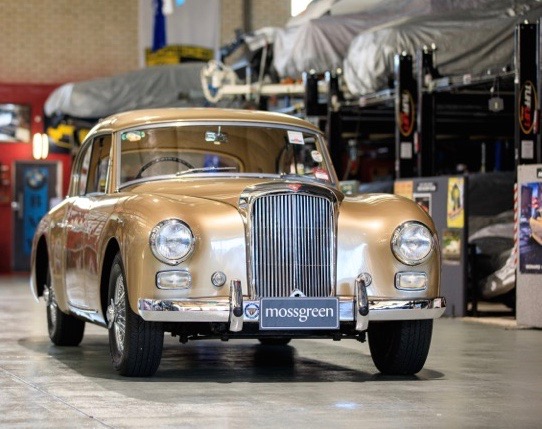 A Graber-bodied Alvis discovered in Madame Graber’s garage and a barn-found 1953 Alvis Healey with movie-star history but not seen in public for nearly 30 years figure to be the highlights of Mossgreen’s collector car auction scheduled for May 28 at Carriageworks in Sydney, Australia.

According to the auction house, the 1954 Alvis Graber TA21G coupe was delivered as a rolling chassis to Swiss coachbuilder Herman Graber and was displayed at the 1954 Geneva Motor Show in white with disc wheels. The car was sold to a Swiss businessman.

Graber wanted to display the car again at the 1955 Geneva show and the owner agreed, but with one proviso. Apparently the owner wasn’t thrilled with the disc-style wheels and in exchange for letting Graber show the car, asked that it ride on a set of bronze-colored wire wheels. Graber agreed and the car still rides on those wheels. It’s two-door bodywork also has been painted in a bronze shade.

In the 1960s, the car’s owner used the car as a trade-in on a new Graber-bodied vehicle. The carrosserie equipped the coupe with a tow bar and used it as a factory utility vehicle for several years. In 1975, British Alvis specialist Nick Simpson discovered the car under a sheet in Madame Graber’s garage. He bought the car and spent nearly 20 years on its restoration.

He sold the car at auction in 1996 and for 10 years it resided in a museum in Saudi Arabia. The car is being consigned to auction by its owner for the last decade.

Meanwhile, the 1953 Alvis Healey is one of only 25 built and at one time reportedly was owned by a polo-playing socialite Leverett Saltonstall Miller, who was dating and later married Ava Norring, a Hungarian-born actress most widely known for her role as Beatrice in the 1952 film, The Snows of Kilimanjaro, which starred Gregory Peck, Susan Hayward and Ava Gardner.

The car has been in Australia since 1988 but has been stored away from public eye and is being offered at auction in barn-found condition.

The car has a 3.0-liter Alvis six-cylinder engine. The bodywork was designed by Gerry Croker, who later was responsible for the shape of the Austin Healey 100.