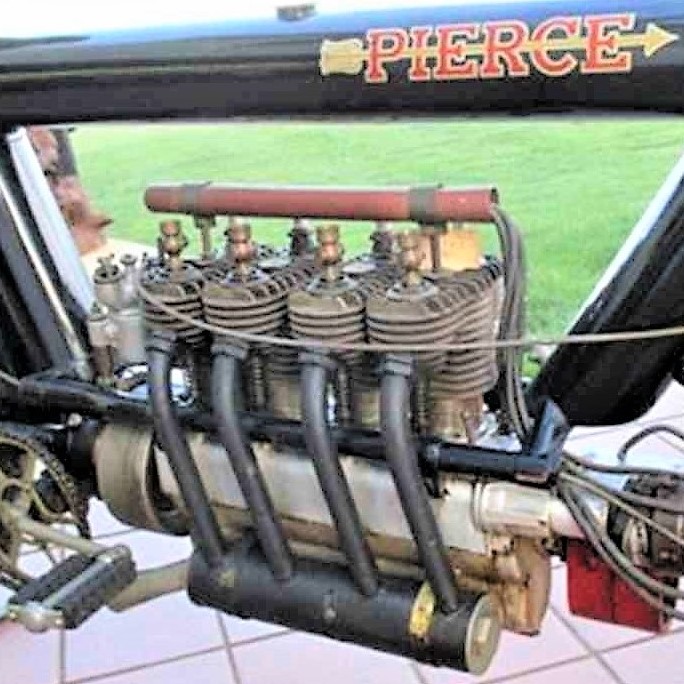 Anybody who knows anything about vintage cars knows about Pierce-Arrow, a premier maker of luxury automobiles through the 1930s. Less known is the company’s brief foray into motorcycles, producing the first four-cylinder model in the U.S., a bike that was far ahead of the competition.

The Pick of the Day is a handsome example of the first year of production, a 1909 Pierce Four, made by Pierce-Arrow’s fledgling motorcycle division. It is a very innovative motorcycle for the era, with shaft drive and large-diameter frame tubing that  served to contain both gasoline and motor oil.

The Pierce Four was the pet project of the son of Pierce-Arrow’s owner, George Pierce. In 1908, Percy Pierce imported an advanced FN four-cylinder motorcycle from Belgium to use as a model for his machine. The Pierce engineers made significant improvements, and the Pierce Four was ready for customers in 1909.

The inline-4 engine displaces about 700cc, which could propel the 275-pound motorcycle to 60 mph, even though it had just a single gear. Subsequent models were made with two-speed transmissions.

These were expensive motorcycles, directed at the same wealthy buyers of Pierce-Arrow automobiles. But as expensive as they were to buy, they were even more expensive to produce, so that the company lost money on every one sold. That was not sustainable, and Pierce-Arrow closed its motorcycle division in 1914.

While the Providence, Rhode Island, dealer advertising this Pierce on ClassicCars.com provides little information about its condition, the photos show an antique motorcycle that looks nicely restored.

During their production, only about 500 Pierce Four motorcycles were built, making them exceedingly rare and collectable today. So, it’s hard to dispute the lofty asking price of $150,000, which puts it still in the realm of wealthy enthusiasts.

This would be the centerpiece of any motorcycle collection, a remarkable piece of history and a genuinely beautiful example of industrial artwork.