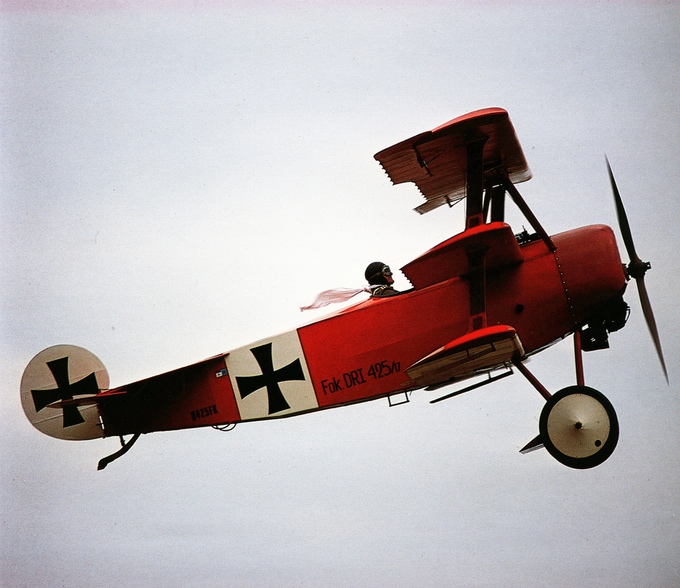 Fokker to be restored | OHTM photo

The Owls Head Transportation Museum in Maine has achieved its goal of raising $50,000 to restore its Red Barron Fokker aircraft.

Saturday the Kansas City Automotive Museum hosts the third annual Dancing with the Cars event, when? a fundraiser with a dinner buffet, entertainment, and a silent/live auction.

The AACA Museum in Pennsylvania plans the “Second Chance Spring Auction” April 8 from 8 a.m. to noon with a flea market and car corral as part of the offering. That same day, and again on April 15, the museum holds an Easter egg hunt from 11 a.m. to 1:30 p.m. The museum holds a Spring Fling Collectible Toy Show on April 30 from 9 a.m. to 4 p.m.

The Automotive Hall of Fame in Michigan announced it will induct Alberto Bombassei, August Fruehauf, Jack Roush and Ed Welburn during an awards gala slated July 20 in Detroit.

America’s Automotive Trust, dedicated to securing the future of the collector car hobby, holds “Drive the Blues Away” presented by the LeMay Family Collection Foundation on April 21 at America’s Car Museum in Tacoma, Washington. Also scheduled are“Fast & Furious, the 2017 Wheels & Heels Annual Gala” on June 3 followed by “Cars & Cigars” on July 28, and the “Summer Ender Fender Bender” on Sept. 9.

Saturday, the Petersen Museum in Los Angeles hosts a book reading and signing with Kay Haring. The event runs from 11 a.m. to 3 p.m.

“If These Cars Could Talk” takes place at the Auburn Cord Duesenberg Automobile Museum on Saturday at 2 p.m. in Auburn, Indiana. The presentation will focus on a 1936 Pierce-Arrow that was originally owned by the Huntington family, owners of a railroad empire.

Shortly after the museum offers the fourth segment in its Curatorial Spotlight series with a presentation titled “Style and Sound: Art Deco and Jazz in the 1920s.” The presentation will take place on April 18, at 6 p.m., and is given as a tribute to Jazz Appreciation Month.

The Blackhawk Museum in Danville, California, continues its speaker series on Saturday with Marshall Buck, known for his expertise in building detailed custom cars. His presentation will be on “The Art & Craftsmanship of Automotive Model Building,” which will cover some of what goes into the making of one-of-a-kind scratch-built models, as well as making the masters for his limited-edition hand-built pieces.

Following Marshal Buck in the museum’s speaker series will be Chris Bock, the Pebble Beach Concours Chief Judge, on April 8 to discuss “The World’s Greatest Concours,” with a presentation on April 9 by former championship-winning driver, John Fitzpatrick.

The National Automobile Museum in Reno, Nevada, offers a history symposium, “The 1970s: Activism: Voices for Change,” on April 26-27, from 4 p.m. – 9 p.m., and on April 29 from 8:30 a.m. to 5:45 p.m. The discussion will feature national speakers, historians, authors and local scholars will present on a wide variety of topics such as the Iran hostage crisis, foreign policy, the impact of the ’70s on our modern-day world, the auto industry and even a humorous look at the decade’s culture, including fashion.

On April 22, the America on Wheels museum will present a discussion with David K. Whitlock and Dr. Vlad L. Pop on the Future Integration of Autonomous Vehicles. The discussion will go over if highways will be clogged with self-driving cars in 10 years, and contemplates if classic and collector cars will still be able to be driven when surrounded by autonomous vehicles.

On Sunday, the National Motor Museum in England hosts “Simply Aston Martin,” a car show celebrating the brand that will be composed of five different Aston Martin clubs.

The Blackhawk Museum in Danville, California, holds a Cars and Coffee on Sunday and hosts the Northern California Corvette Association’s 37th “A Legend On Display” Corvette Car Show on April 23, followed by the fourth annual Carroll Shelby memorial Classic Car Show on May 13.

The Petersen Museum holds a Motorcycle Breakfast Club cruise-in on April 9 from 10 a.m. to noon on the third floor of the parking structure.

April 15, the Auburn Cord Duesenberg museum’s Cars and Coffee gathering on the Plaza will kick-off the season. The following cars and coffee events will be held May 20, June 17, July 15, August 19, and September 16. Each event is free to attend, takes place from 9:00 a.m. to 11:00 a.m. and is open to all vehicles: classic, exotic, muscle, and favorite cars.

The National Sprint Car Hall of Fame & Museum in Knoxville, Iowa is raffling an “Australian Sprint Car Vacation.” The raffle winner will receive two round trip airfares from the United States to Australia, seven nights in a hotel, and two tickets to all three nights of the Grand Annual Sprintcar Classic at Warrnambool. The winner will be selected on August 12, need not be present to win.

The LeMay Marymount in Tacoma, Washington, offers driver education in a Ford Model T’s with students touring the historic 88-acre Marymount Military Academy Campus while learning how to drive the Model T. Classes are offered from May through September.

The National Corvette Museum holds High Performance Drivers Education on April 27-28. The program focuses on Education, Safety, and Fun. Students are separated into groups based on road course driving experience, with most being assigned experienced driving instructors to help teach and enhance driving skill and enjoyment.

A new “American Muscle Cars” is set to open at the World of Speed Museum in Wilsonville, Oregon on April 6.

On April 8, the America on Wheels Museum debuts a new exhibit called “Pony Cars, Then and Now.”

On Friday, May 19, the British Motor Museum shows “British Motoring Treasures: the British Motor Car in Fifty Objects.” The exhibition, which will run until March 2018, will showcase the depth and variety of the nationally-designated collections held at the museum and tell the story of Britain’s motor industry using fifty key objects.