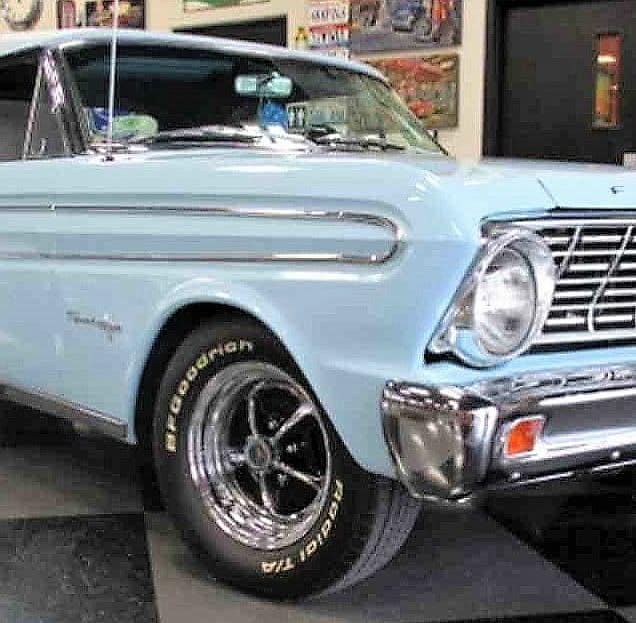 Spring has sprung, so it’s time to dust off the ragtop and go cruising. What, still covered in snow? Be patient because the warm weather will come. It always does.

The Pick of the Day is an homage to spring and rebirth, a baby-blue 1964 Ford Falcon Sprint convertible that’s about certain to make you feel young again. And this car’s youthful appearance is genuine; it is a 53-year-old survivor still wearing its original glossy paint and with just 51,500 miles on its odometer.

“Every part on this car is original,” says the Fort Worth, Texas, dealer advertising the Falcon on ClassicCars.com. “This Falcon has been very well taking care of.”

Model year 1964 was a great one for Ford, stylistically, and the Falcon was nicely re-envisioned with a sporty flair. The somewhat boxy shape looks great as a sport model, complete with chrome rocket trim on its flanks from nose to tail.

The Sprint convertible was the top-of-the-line Falcon, powered by a 260 cid V8 and, in this case, a Ford-O-Matic transmission. The interior also got some sporty trim, with classic bucket seats, console and three-spoke steering wheel. All told, it was a great package that lifted the Sprint far above the economy-car status of the everyday Falcon.

Obviously, such wear parts as the tires and top have been replaced. The Falcon wears a fresh set of BFGoodrich Radial T/A tires, the dealer says, on chrome rims that look like the real Ford articles (Mustang?). The convertible’s new power top looks nice and tight in the ad’s photo gallery.

The Falcon comes with a matching blue car cover and what the dealer calls a “display sign,” possibly for setting up with the car at classic car shows. Both items are very good signs that signify pride of ownership.

Falcons are personal favorites of mine, not necessarily because I used to drive around in my mom’s funky four-door 1963 base model, which I gradually destroyed with my adolescent driving excesses. My sarcastic high school girlfriend called it “The Bullet.”

I just like Falcons, and the 1964 version is the best, to my eye. This preserved Falcon looks very correct, with proper ’60s touches as the raised-white-letter tires. And from the photos, its state of preservation seems flawless.

The Falcon is priced at $31,500, which is completely in line with what the Hagerty Price Guide says it’s worth.