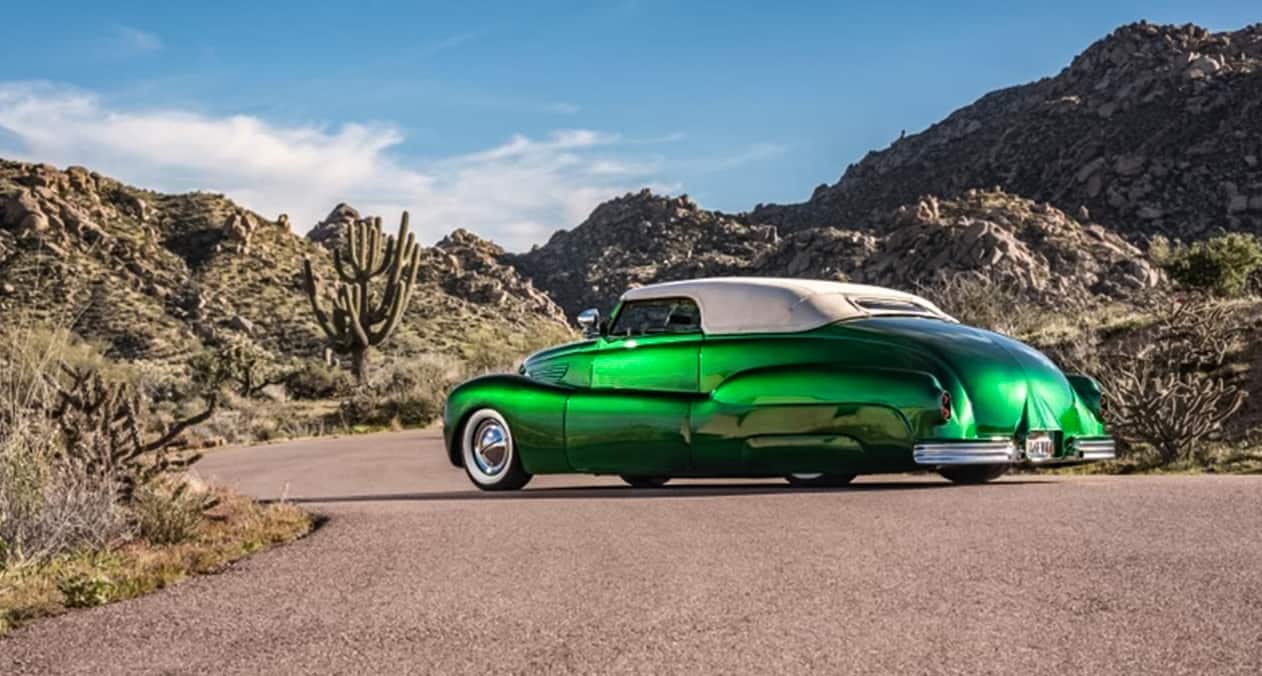 Goodguys Rod and Custom Association made a visit to Scottsdale, Arizona, last weekend for the eighth annual Spring Nationals car show. The event attracts hundreds of classic cars from Arizona and surrounding states.

Given that ClassicCars.com has such a huge selection of cars advertised for sale on its site, it came as no surprise that I ran into a few that I recognized from their ads. The Pick of the Day, a 1946 Ford Custom, was one of them.

Despite how beautiful the photos are in the ClassicCars.com listing, they don’t do the car justice when compared with seeing it in person. Per the listing from a dealer in Scottsdale, the car received 14 coats of Kandy Emerald Green by House of Kolor atop a silver base coat to achieve the seductive finish that gives the car its name: Green Envy. The body looks straight and shows well with its set of custom hubcaps and wide whitewall tires.

This custom creation incorporates many elements from other cars produced around the same era.  The platform started out as a 1946 Ford convertible and was adorned with Ford elements from various years, such as headlights from a 1939 model, while the windshield was raised two inches to make room for a Lincoln cowl hood. The front end is immediately recognizable as it utilizes many design components from the 1938-39 Lincoln Zephyr, while the front suspension and steering are that of a Mustang II. A Ford Granada supplied the car’s 8-inch rear end.

The 1946 frame was extended 5½ inches in the front, which slightly lengthened the wheelbase.  Bits of Buick include what the seller calls “fade-aways” from a 1950 Buick into rear fenders that have been sectioned and shortened seven inches. The tunneled taillights are also from a 1950 Buick.

Other customization parts include 1950 Plymouth wagon rear bumpers with exhaust outlets in the center ends, 1949 Cadillac skirt, and a stainless boat-deck fuel filler installed in place of the Buick filler. An original Hauser Carson convertible top completes the look.

Under the hood, the custom Ford receives its power from a rebuilt 312-cubic-inch V8 out of a 1957 Ford Thunderbird that has been fitted with an Edelbrock 650 four-barrel carb and mated to a C4 automatic transmission with ’57 T-bird shifter.

The Zephyr influence is brought into the interior of this Ford, as it has been fitted with the dash and steering wheel of a 1941 car, and uses the steering column of a 1939 Zephyr along with a Mustang rack and Borgeson steering shaft kit.

Creature comforts include a Glide Engineering seat with custom-built power windows and wipers by Vintique, a hidden Vintage Air system that cools, heats and defrosts, and a custom remote-controlled stereo with CD player and iPod connections, the listing says.

This classic custom has graced dozens of magazine covers and books, according to the seller, as well as earning many awards, notably the George Barris Kustom D’Elegance Award at the 1999 Grand National Roadster Show in San Francisco, the year it made its debut.

As an added bonus, the car has significant celebrity ownership in its background, having been in the possession at some point of country-music great Buck Owens.

The lavishly customized Ford is offered for $64,500.