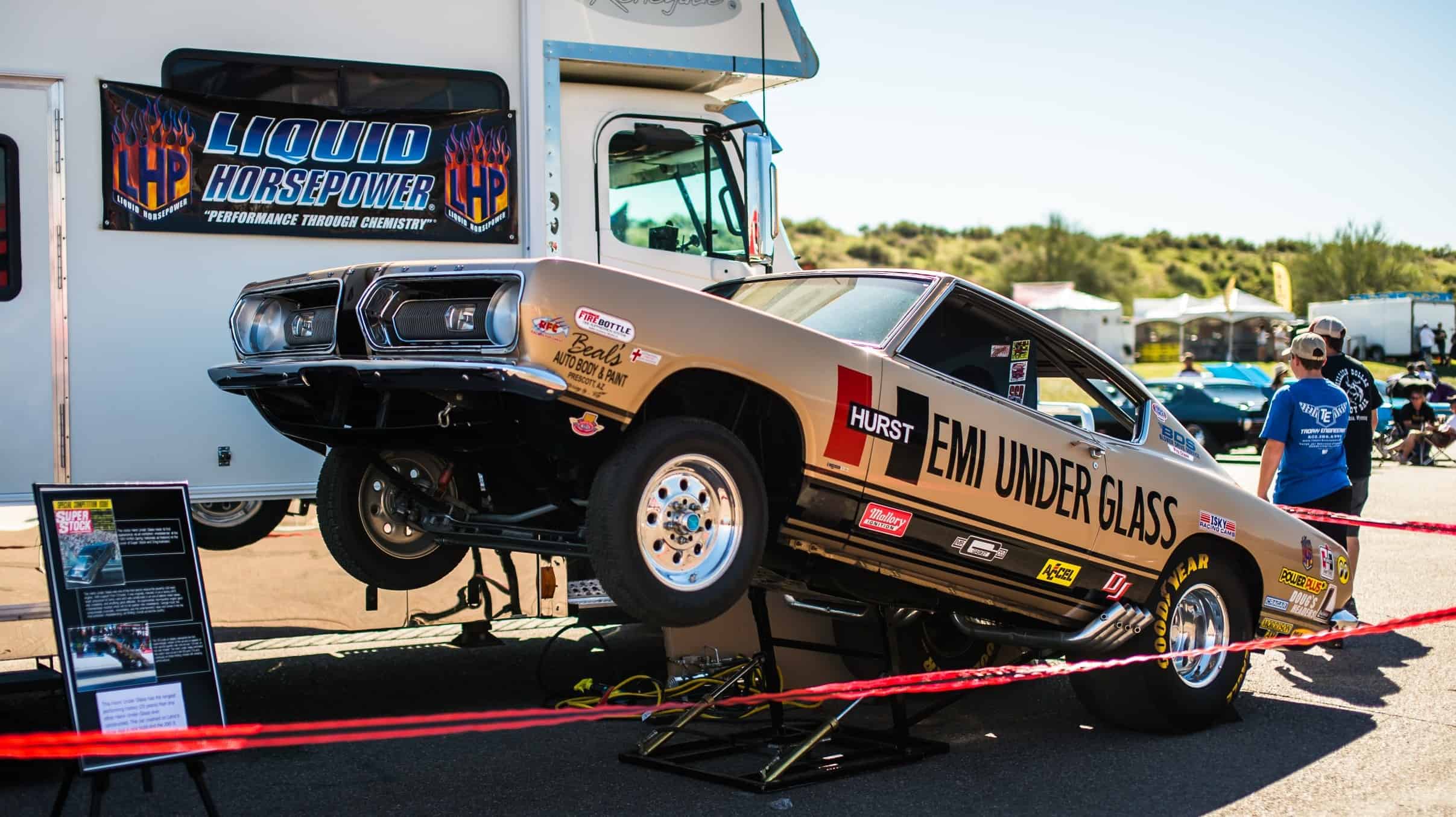 Hundreds of classic cars made their way to Scottsdale, Arizona, for the eighth annual Spring Nationals car show, held March 10-12 and organized by Goodguys Rod and Custom Association. The Spring Nationals kick off the association’s 20-event schedule which stops in 13 states, each attracting a different array of vehicles.

The Goodguys events frequently include a swap meet, car corral, show ’n shine, even an autocross, but drag racing is rarely associated with these events.

Nonetheless, and despite appearing a little out of place, tucked away among vendors, two famous drag cars from the ‘60s were displayed for viewing –- the iconic Hurst Hemi Under Glass and the Dodge A100 known as the Little Red Wagon, which that crashed in Canada, rolling 11 times, in 1975.

The Hemi Under Glass was initially intended to be a factory-built race car during an era where “anything goes” attitudes led to altered wheel bases and wild creations. With support from Chrysler, the car received a 426 Hemi engine mounted in the rear of the car and visible through plexi-glass.

The experimental, mid-mounted engine gave the car tremendous traction, which led to full quarter-mile wheel stands. Seeing how such a phenomenon would entertain people across the country in 1965 George Hurst debuted the vehicle at the 1965 NHRA Spring Nationals as an “exhibition wheelstander.”

The Hemi Under Glass on display at Scottsdale is based on a 1969 ‘Cuda and represents the first supercharged version of the engine. The car is capable of a nine second quarter-mile sprint at over 130 mph on the rear wheels and has the longest performing history –- 23-years — of any Hemi Under Glass constructed.

During the summer of 2016, the Hemi Under Glass made headlines when a newly build, nearly identical version crashed on the CNBC show, Jay Leno’s Garage. The mishap took place at Irwindale Speedway, the car flipping several times, with both Leno and the stunt driver Bob Riggle walking away without injury.

Parked opposite the Hemi Under Glass was the Dodge A100 pickup.

Driven by Bill “Maverick” Golden, the truck had been fitted with a 426 Hemi engine and TorqueFlight transmission. The mid-mounted engine drank a 30 percent nitro fuel. The car was toriginally designed for the A/FX class and ran some races, but quickly became the Little Red Wagon that we know today due to the truck’s notorious nose-high runs.

Over the years, more than one A-100 became Little Red Wagons, including the original, which was wrecked in 1969. A replacement wrecked in 1971. The truck at Goodguys was built from parts scavenged from the other two. It also crashed, in 1975 in Canada, rolling over 11 times, including 6 end-over-end flips.