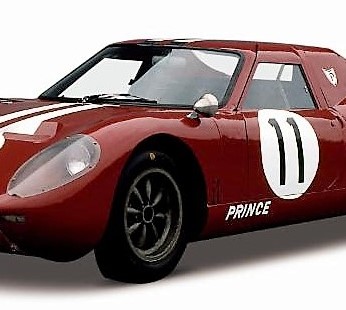 Even if you are among the rising tide of Japanese collector car fans, don’t feel too bad if you’ve never heard of the Prince R380, one of Japan’s first purpose-built race cars. Although little remembered today, the lusciously streamlined R380 made quite an impression in 1966 when it succeeded in beating the reigning Porsche 906s at the Japanese Grand Prix.

The six-cylinder endurance racer also set several speed records in 1965, and it helped put the tiny Prince Motor Company in the spotlight of international motorsports.

The only known surviving Prince R380, the very car that won the 1966 Japanese Grand Prix at Fuji Speedway, will make its North American debut Sunday at the Amelia Island Concours d’Elegance as part of a special Japanese Prototype class.

The historic car will be presented by Infiniti, the luxury division of Nissan, which merged with Prince in its race-winning year of 1966.

“The Prince R380 is a very important race car, and we are eager to share it with automotive fans from all over the world attending the Amelia Island Concours,” Alfonso Albaisa, executive design director for Infiniti, said in a news release. “Prince Motor Company, during its short time, definitely made history, and its engineering and design legacy continues to live on.”

Prince Motor Company was founded in 1952, an outgrowth of the Tachikawa Aircraft Company, an aeronautical manufacturer started up in the 1920s that built civilian and military aircraft. After the war, the re-established company made electric vehicles for gasoline-depleted Japan, but it eventually became well-regarded as a premium-car manufacturer.

Prince Motor Company, during its short time, definitely made history.”[/pullquote]

The development of the R380 came after Prince narrowly lost the inaugural 1964 Japanese Grand Prix, placing second to a Porsche 904 with a specially modified Prince Skyline GT powered by an inline six-cylinder engine from the Prince Gloria luxury sedan.

The race team, inspired by its first-outing success, began work on the purpose-built racer. The R380 was built on a Brabham BT8 mid-engine chassis, with unique mechanics and aerodynamic bodywork. Shinichiro Sakurai, head of Prince Motors engineering, developed a new engine known as the GR-8, a 1,996 cid, inline six-cylinder engine that produced 200-horsepower.

There was no Japanese Grand Prix held in 1965, so Prince debuted its new R380 race cars in 1966, and they crossed the finish line in first and second places ahead of three Porsche 906s.

“The Prince R380 was one of the first Japanese competition cars ever developed,” Bill Warner, founder and chairman of the Amelia Island Concours d’Elegance, said in the release. “The R380 told where the future was going for Japanese automotive companies, as Prince understood that racing was an important ingredient for establishing a brand.

“To have the Prince, which was one of the earliest successful race cars, here for the first time in the Americas and at The Amelia truly is a thrill for me.”

The Amelia Island Concours will be held Sunday on the fairways of The Golf Club of Amelia Island at the Ritz-Cartlon Resort. For information, visit the concours website.