News updates: Catching up on Barris’s 67-X, convertible tops, concours, back issues of AQ, and more

As part of the Canadian centennial celebration, Expo 67 in Montreal, oil and gas producer and retailer Esso commissioned George Barris to create a futuristic vehicle. Barris used an Oldsmobile Toronado as his canvas for the 67-X.

Four such cars were produced, and after Expo 67 they were given away in a contest. The only one known to have survived is on display through March 12 at the Royal BC Museum in Victoria, British Columbia, as part of a celebration of Canada’s 150th birthday.

“I think the 67-X is an important part of Canadian history,” car collector and 67-X owner Trevor Welfen told the Canadian website, driving.ca. Welfen, founder of the Great Canadian Oil Change stores, acquired the 67-X in 2011.

Barris started with the Toronado, which was Motor Trend’s car of the year, stretched its chassis, created fiberglass bodywork for the front and rear of the car, added disc brakes, and inside installed swivel seats, a writing table, picnic cooler, a pair of tape decks, two radios and headphone jacks so children or other passengers could listen separately.

While on the subject of museums, the Branson Tri Lakes News reports that new management is in place at Branson’s Auto & Farm Museum in Branson, Missouri, following the death last year of museum owner and collector Maurice Wilder.

“We’re going to take the legacy of Maurice Wilder, and make it bigger,” sales manager Rod Glaze is quoted. “That’s our charge, to make this place work and become a part of this great community.”

Launched as the Branson Auto Museum in 2009, the museum was rebuilt after being destroyed in the “Leap Day Tornado” in 2012, the News reported. Wilder rebuilt an expanded, 90,000-square-foot museum that included not only collector cars but farm equipment. The News notes that Wilder was the country’s largest “single independent corn farmer.”

“We usually have around 3,000 museum-quality pieces. That’s usually around 140 cars and around 160 tractors and other pieces of farm equipment,” said Glaze.

Is your convertible ready for a new top?

With European roots dating to 1897 as Rode & Schwalenberg, the U.S.-based and family-owned Haartz Corporation has been a leading supplier of fabric automotive tops since 1907 and has just announced a new database to help people who need new convertible tops for their cars find them.

The database covers cars produced from the 1982 to 2017 model years, asks the car owner to pick the year, make and model, and then suggests the material that meets the original-equipment specification and provides a list of places where a new top can be properly cut, sewn and installed. While the computerized records only date to the early 1980s, the company does have some earlier resources should you have an older car that needs a new top.

“When replacing softop convertible material, maintaining the original quality is important as the imposter materials will lead to a number of problems, including improper fit, poor acoustics and reduced durability,” Haartz director of business development Matthew Williams said in a news release.

The 39th Concours d’Elegance of America (aka the Michigan concours at St. Johns) will honor Arturo and Deborah Keller as featured car collectors of the year and designer Ralph Gilles as enthusiast of the year.

The Kellers will display five of their aerodynamic coupes in a special grouping at the concours, scheduled for July 30 in Plymouth, Michigan. Those cars are:

Gilles is head of design at FCA (Fiat Chrysler Automobile).

The second Atlanta Concours d’Elegance, scheduled for September 30-October 1 at the Chateau Elan winery and resort, has announced a special Fabulous Fins of the Fifties class; that seven cars will be selected from the Saturday Drivers at the Chateau to participate in the concours the following day; that 2016 honorary judge Keith Martin will serve as chief judge in 2017; and that the concours will host a monthly Classics & Coffee event the fourth Saturday of the month at various locations in the Atlanta area for pre-1960 American and pre-1970 European vehicles. For details, see the concours website.

You may have heard that a bill was introduced into the House of Representatives in Oregon to impose an “impact tax” on vehicles 20 years old or older, although “antiques” would be exempt from those payments.

The bill would have collected the $1,000 tax now, and again five years from now, and five years after that should the car still be on the road.

But there was such a strong and immediate response from the collector car community that the speaker of the Oregon house pulled the bill from consideration. 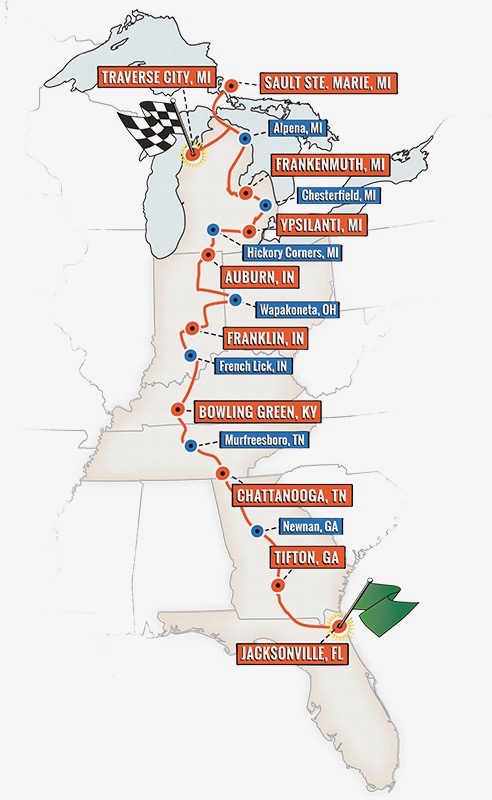 The 2017 Great Race starts June 24 (well, actually June 23 with the Hagerty Trophy Run) and ends July 2 in Traverse City, Michigan, which is where Hagerty has its headquarters and where the annual Cherry Festival will be in full blossom.

In between, the Great Racers will visit a variety of car museums and collections, including a stop in Chattnooga, Tennessee, home of Great Race head Corky Coker and his tire company.

The schedule also includes “pit stops” at Wayne Vick’s car collection in Armuchee, Georgia, and at the Hudson Auto Museum in Shipshewana, Indiana.

The Society of Automotive Historians has arranged for the sale of back issues of Automobile Quarterly, from Volume 39 (Nos. 1 and 3) through Volume 51. Most are priced at $10 each (plus shipping and handling), though some are more expensive.

The copies are available through John Denney at Bethlehem Packing & Diecutting Inc., in New Albany, Indiana. He can be reached at jdenney@bethpac.com.

The historians note that Denney and his company are not affiliated with the owners of Automobile Quarterly, but bought the building where the past copies were stored and are selling those leftover issues.