This car matters: Meyers and his Manx at the Classic Auto Show 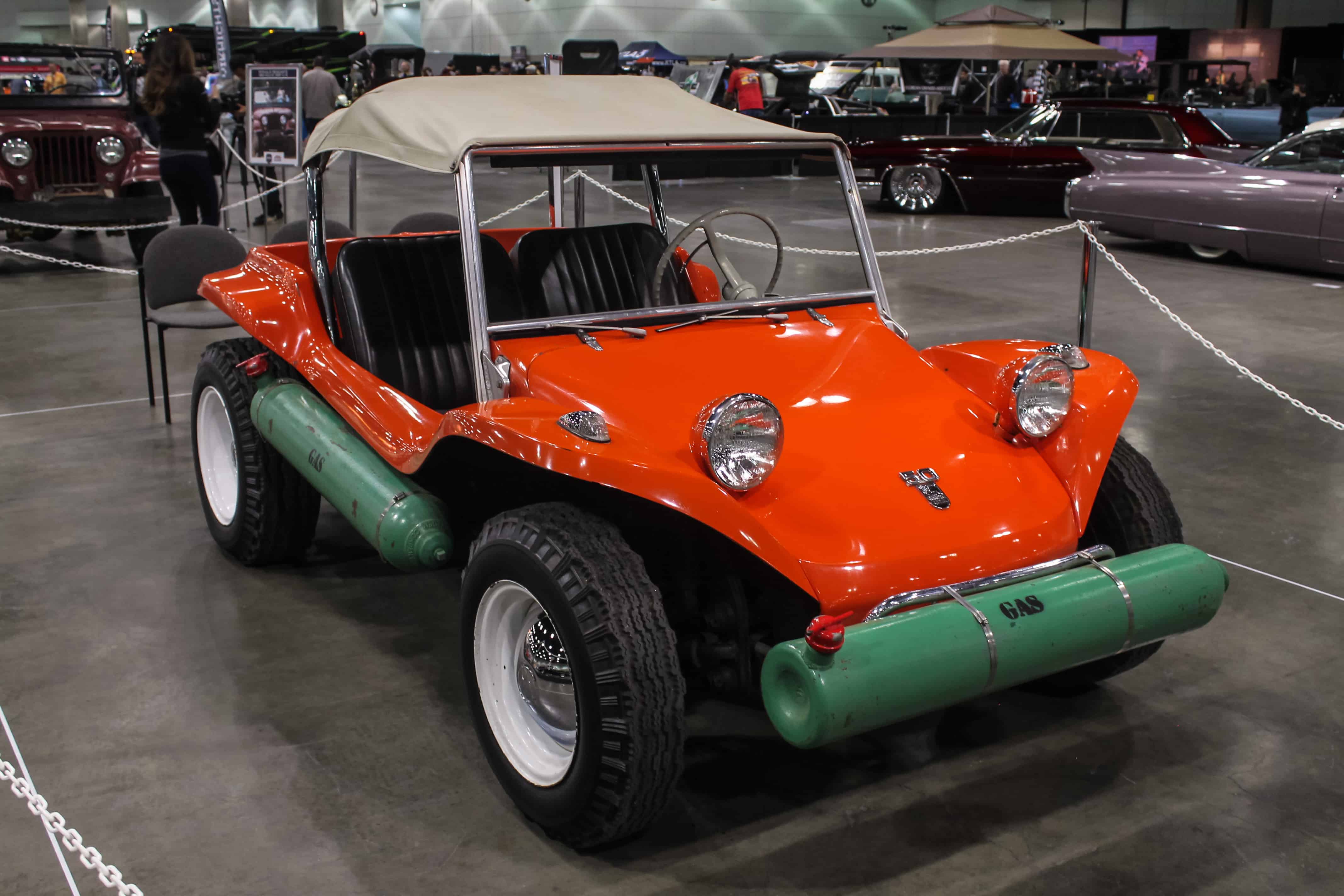 The Historic Vehicle Association developed a documentary project  designed to collect, preserve and share stories that celebrate the impact automobiles have made in history, culture, and the lives of everyday people. Bruce Meyers, the creator of the first fiberglass-bodied dune buggy – known as the Meyers Manx —  appeared in one of the first HVA documentaries and “Old Red,” Meyers’ first dune buggy, is part of a special  Grand Boulevard showcase of more than 50 vehicles at the inaugural Classic Car Show this weekend in the Los Angeles Convention Center.

Meyers, joined by HVA president Mark Gessler, shared his first experience with what he refers to as “water-pumper dune buggies”  at Pismo Beach, California, in the 1950s. Meyers said the buggies had been fabricated from existing Fords, Chevy, and Dodge vehicles that were heavy, slow, and so long it made navigating difficult on the beach dunes. All of which led him to pursue a Volkswagen Beetle chassis for his version.

“I added all the line and feminine form and Mickey Mouse adventure I could,” he said, adding that it had to look like it came from California, from Meyers’ California, where he would “smoke a little grass, race a ’32 Highboy Ford at the lake beds, and chase pretty girls.”

In 1964, the initial Manx prototype was ready for testing. According to Meyers, his early models used mounting points for the suspension and the drivetrain hardware molded into the fiberglass body.

“Dune buggies have a message: fun,” he said. “They’re playful to drive and should look like it. Nothing did that at the time.”

Gessler prompted Meyers to tell about the Baja 1000 race. Simling as he remembered the moment, Meyers began the story explaining that he and his friend, Ted Mangels, drove the world’s first Meyers Manx down the length of the Baja Peninsula, from Tijuana to La Paz, in just under 34 hours and 45 minutes, five hours more quickly than the record set five years earlier, in 1962, by the famed Bud Elkins on a Honda CL72 Scrambler motorcycle.

To beat that record by five hours, Meyers and Mangels had fitted the buggy with external fuel cells fastened to the front and sides of Old Red. In the process, the pair proved that a four-wheeler could go anywhere a high-piped scrambler could, even when ridden by a motorcycle-racing legend.

Rear of the buggy

Shortly after this victory, an ex-Marine by the name of Ed Pearlman, who had co-founded the National Off-Road Racing Association the year before, began coordinating the Mexican 1000, recognized today as the Baja 1000. The race was a 1,000-mile event that largely traced the route taken by Meyers and Mangels. In fact, Mangels and Vic Wilson entered the first race behind the wheel of a Manx Buggy and on November 2, 1967, finished in first place.

The following year, Meyers entered the race and tried to chase down Parnelli Jones, but drove into an unseen embankment, resulting in both of his legs being broken with compound fractures; he nearly lost his left foot. Alone in the desert, Meyers spent 22 hours in pain before being airlifted to a San Diego hospital.

Throughout his life, Meyers attempted the Baja 1000 10 times, of those, his record-breaking run was the only time he had finished the full distance.

While the Meyers Manx design proved to be lightweight and efficient, the design was costly to produce and a high demand for the Manx led to knock-off versions. Meyers pursued lawsuits against those using his patented design, yet despite his best efforts a judge ruled against him and shortly after his company dissolved.

In 1994, Meyers attended the international Volkswagen show at the Circuit de la Sarthe in France. The show allowed Meyers to see how significant his buggy had become and sparked his desire to bring back the Manx. As a result, Meyers Manx Inc. opened in 2000 and created a classic version of the Manx as well as the Manxter 2 + 2. In 2009, at 89 years of age, Meyers launched the Kick Out, an updated version of the Manx, and the Kick Out SS, meant for “strictly Street” use.