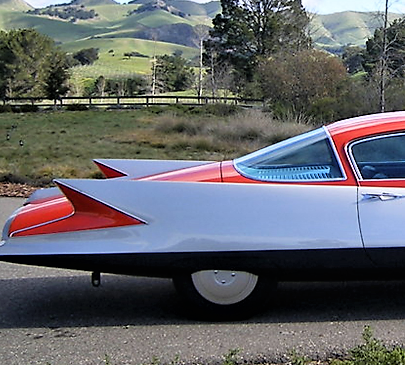 From a time when designers and engineers were attempting to blend automobiles with jet aircraft comes the 1955 Chrysler Ghia Streamline X, nicknamed Gilda after the Hollywood film and its glamorous leading lady, Rita Hayworth.

Gilda was a concept car commissioned by Chrysler design chief Virgil Exner and styled by Giovanni Savonuzzi with coachwork by Ghia of Turin, Italy. It was first shown at the 1955 Turin Motor Show, where it created a sensation.

Remarkably streamlined after wind-tunnel experimentation, Gilda is considered to be a breakthrough design that influenced styling features from Chrysler for the rest of the decade.

But most incredible is the concept car’s means of propulsion. Instead of a piston engine, Gilda is powered by an AiResearch turbine, a compact unit that shrieks at high rpm and sounds as if the car should be taking off from an aircraft carrier. But no, it stays on the ground despite its extravagant tail fins.

Following this concept car, Chrysler continued to experiment with turbine engines as the possible wave of the future, most notably its 1964 Chrysler Turbine concept that was made to seem production ready. But never again was there another car quite like Gilda.

The turbine coupe was no mere show car, either, but a forward-looking testbed of experimental aerodynamic design and turbine power.

“Styling is the work of Giovanni Savonuzzi and was commissioned by Chrysler design chief Virgil Exner, who wished to explore solutions for crosswind resistance and rear-end grip, as well as turbine power,” Barrett-Jackson says in its catalog description. “Gilda is superbly constructed, with a sturdy, elegant aluminum body atop a square-tube chassis, a separate aluminum floor for the passenger compartment and a full belly pan for aerodynamic efficiency.”

The futuristic interior seems simple by today’s standards, but it incorporates key driving features that visualized the cars of tomorrow. For instance, there are no pedals on the floor, with acceleration and braking controlled by aircraft-like hand levers.

The engine and streamlined body give the car a potential top speed that rivals today’s performance cars.

“Computer and wind-tunnel modeling have determined that the 70 hp turbine would be capable of propelling the car up to 160 mph,” the catalog description notes.

The current owner is a judge for the Pebble Beach Concours d’Elegance, notably for the Preservation Class, and Gilda retains most of its original finishes and equipment, down to its original CEAT tires.

The concept car was housed in the Ford Museum for many years, followed by careful private ownership by a few individuals, the description says.

Unlike most Barrett-Jackson’s auction vehicles, which are sold without reserves, the Ghia Streamline X carries a reserve price that must be met by a winning bidder.

And while Barrett-Jackson is best known for the roar of high-performance engines as cars come up on stage, the high-pitched whine of Gilda’s turbine engine should be quite a unique experience for the auction crowd.

To see and hear Gilda being driven at the Concorso Villa d’Este in Italy, visit Gilda video.